Emotions are running high.  Earth’s Mightiest Heroes are starting to feel controlled and taken for granted. Figureheads Captain American and Iron Man are at each others’ throats — no surprise to anyone, Marvel placed the first brick for this conflict back in 2012 with the first Avengers feature.  Maybe most importantly, comic fans all around the world are waiting with bated breath to see how the studio giants will handle one of their favorite Marvel arcs in the history of comics.  There’s definitely a lot going on here.  You already know the story, so I won’t waste too much time on it: Captain America: Civil War serves as Avengers 2.5, pulling together nearly every Avenger, past, present, and future.  The only two characters tastefully absent are Thor and Hulk, and almost reasonably so: Thor, being no citizen of Earth, really has no place in this fight and Hulk, with his frequent and entirely foreseeable sudden fits of destructive rage would be the statistical anomaly that is omitted from the case study on the correlation of superhero proliferation and rampant, unattributed damages to real estate.  Pitted against one another on a scale of 1:1 with enough margin of error to account for backstabbing and deceit, our beloved heroes of the franchise square off against one another, and — in a maneuver less poetic than the writers give themselves credit for — over a multi-governmental mandate that has the potential to change their lives drastically.

I’ve been preaching for years that Civil War the movie would only very slightly resemble Civil War the comic book arc.  And I was right, entirely.  I need to point this out because my ability to predict narrative trends in comic book film adaptations is a serious point of pride.  In this case, though, even I undershot the estimate.  I hadn’t realized how little the movie would reflect its source material.  Whether or not this matters is on a case-by-case basis.  Maybe you arrived at Civil War after a twenty-year beat in Marvel comics, or maybe you started with Civil War in high school, or maybe even you began reading the comics after seeing the movies and back tracked to Civil War so you’d have your foundation covered once the film arrived.  If you’ve read the comics at any point and crossed over this arc, it probably matters to you in some way.  Unfortunately, don’t look for the same kind of meaning in the film.  Captain America: Civil War reduces one of the greatest and best loved story arcs in the history of the medium down to only its most superficial basics: Captain America versus Iron Man. 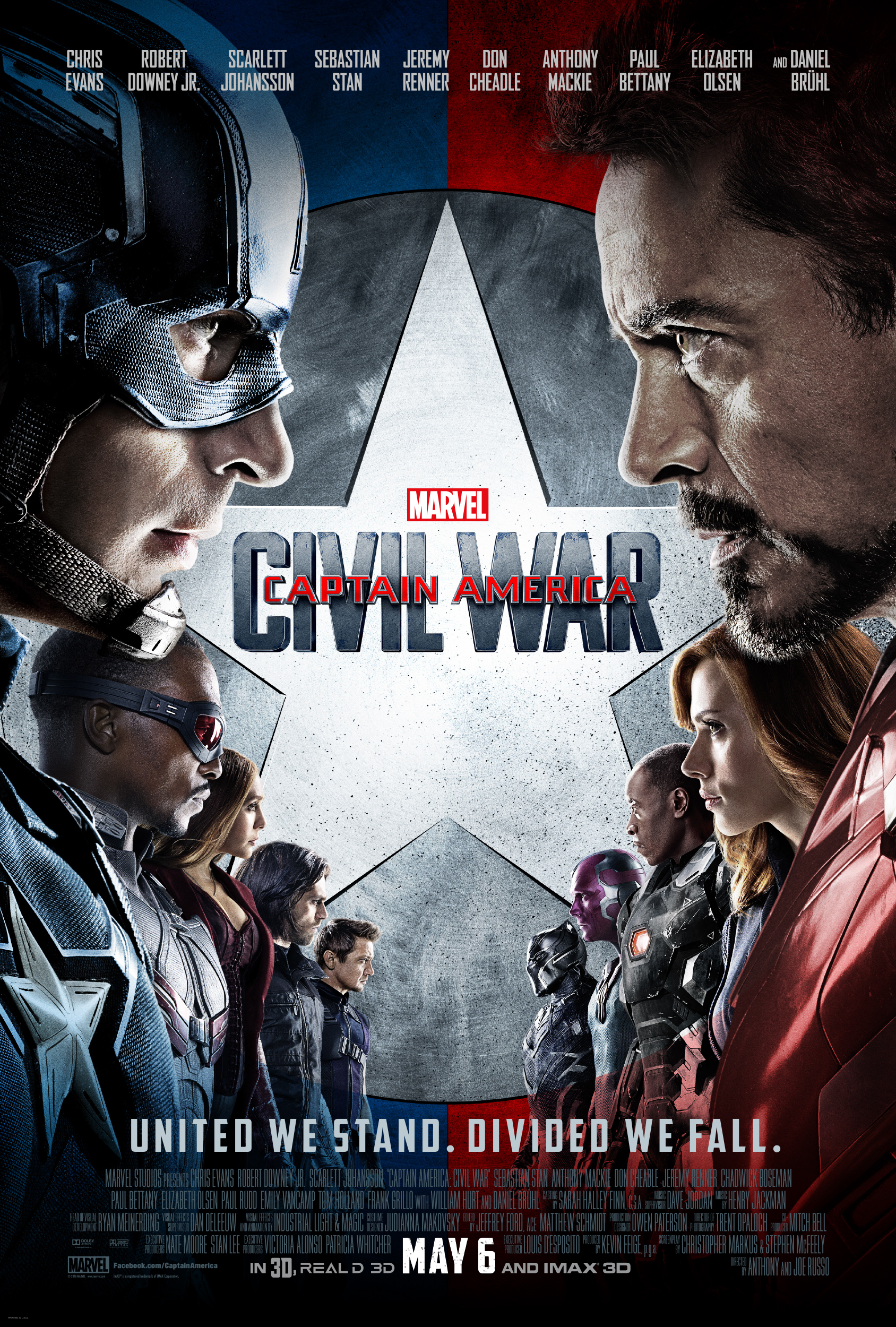 Gone is the Superhuman Registration Act that sparked off the events of Civil War in the comics, replaced instead with the Sokovia Accords.  The difference here is that the Superhuman Registration Act would effect all superhumans, making the fight for fundamental rights.  The Sokovia Accords, however, effects the Avengers exclusively, making the fight solely for oneself.  Why is this important?  Because Captain America is seen as a much nobler, more selfless savior when he fights and (spoiler!) dies in the comic for the rights of his peers.  Instead, in the film, the fight is morphed into one Captain America is pushing against everyone else because now, his routine is going to have to change a little.  Less dramatic, less noble, much more selfish and paranoid.  Captain America no longer seems like the bastion of freedom and the champion of fundamental rights that the comic built him up into.  This is the first time I’ve ever thought that Marvel just missed their mark.  It’s a small change, but it changes entire themes that the film would have otherwise inherited from the comics.  In other words, this is the kind of hackneyed change we could expect from Zack Snyder.  The only explanation I have is that the folks writing and direction Civil War didn’t really understand what the comic was about.  There are plenty of other differences in the comic — Spider-Man’s involvement, for instance, was also reduced down to its barest essential elements, in this case, that element is that he was just there — but none of them matter, because this one change shifts the entire theme and focus of the film.  This should have been an Avengers story, instead, it rests almost solely on Chris Evan’s chiseled shoulders.

I spoke weeks ago with my comics-beat cohort Sean Corbin about the biggest difference between the Marvel films and their Netflix series properties.  To me, that difference is in the villains.  For the most part, each of these Marvel films have produced predictable, single-note villains that embody one of a very limited number of dastardly tropes. There’s a reason none of them (with the exception of maybe Loki, who has never really been the alpha villain, more of a distraction than anything) haven’t been featured more than once.  They’re faceless one-off characters with no personality.  When one falls, another easily slips into place without too much of an interruption because they’re all essentially the same.  Captain America: Civil War continues that trend with probably the least exciting villain to date in Helmut Zemo.  Zemo should have been cool.  In the comics, he’s not the greatest, but he’s at least interesting.  In the film, Daniel Bruhl’s Zemo — a whining conniver which machinations of toppling a global regime — is so boring that he’s maybe only present on screen for about seven minutes of the film’s 147.  Because the conflict between Iron Man and Captain America is boiled down to differences in clerical procedure, this film really needed a powerful, enigmatic villain to fill the holes.  Instead, we get a lazy revenge plot.

My biggest concern with this film, though, isn’t between acting or themes or even adaptation.  No, my biggest concern is that it so clearly illustrates a fate I’ve feared would befall the Marvel films since I saw that first Avengers movie in 2012.  Simply put, Marvel Studios are reaching critical mass.  Gone are the days where you could pick any one of the films, watch it, and be okay.  Now, in order to get the full picture, you have to be seeing them all (a lot like how the Marvel cons their readers into buying every single issue of every single title by cutting little pieces of the bigger story across their entire roster).  Not only that, but these films aren’t able to stand as their own individual franchises anymore.  From here on out, we’ll be seeing even more bleed between the separate titles until we can’t tell whether Iron Man 4 or Hulk 2 (a guy can dream) is an Avengers film or whether it belongs to that character specifically.

Okay, I lied.  The biggest concern with this movie is an alarmingly creepy uncanny valley re-creation of Robert Downey Jr. in his mid-twenties.  It was early on in the movie, and it was only on screen for about three minutes, but you have no idea how scarring it was.

Fear not, however, loyal Marvel viewer, because the movie wasn’t all bad.  The action scenes are immaculate.  This entire movie may have been made just to show off huge fight sequences between Marvel’s primary players, but at least the fight sequences pay off.  The combat is fast and visceral, and for many of them, it really is damn difficult to tell which side is going to come out on top.  The cinematography tends to play too tight and close to the ground with small upward angles for my tastes — this is an easy cheat hack for action movies — but the choreography is exciting and energetic.  I got so pumped up during that airport scene we’ve all seen in the trailers that I almost slugged Sean in the jaw just to exorcise some of that pent up friction I was building up by rubbing my hands together.  But do you want to know what was even better?

Spider-Man.  Actually, that’s not true.  Spider-Man was cool and all, and it’s definitely the most accurate portrayal of him the silver screen has seen this far, but his introduction was almost an afterthought, like they’d finished the film and decided to add him in for good measure at last minute.  It was adequate, but I’ve seen better introductions. Who, you may ask, can possibly top Spidey?  The answer is the mighty T’Challa, the guardian of Wakanda: Black Panther himself.  While Spider-Man’s introduction and participation seemed forced and half-assed, Black Panther’s place in the film and his introduction to the film franchise seemed entirely organic.  In fact, Black Panther is the only part of this film that really seemed natural.  In every scene he’s in (even though he’s abused into the form of a lazy plot device in the third act of the film), he manages to steal the show.  Chadwick Boseman really hits it out of the park, even if he does play the role with a lot of sadness where he should be furious.

All things considered, I can only say that this film is kind of okay.  It’s not great, but it’s not terrible.  For the first time, this is the first Marvel movie I feel I can’t justify as anything other than a one-hundred-percent popcorn feature.  It’ll be a fun action flick to take the kids to and an effective vehicle to push forward the franchise forward with, but it’s not breaking any new ground and it’s definitely not winning any awards.  Still, Marvel die-hards are likely to have a fun time, so spend that extra five dollars for the 3D and don’t feel bad about having a good time.