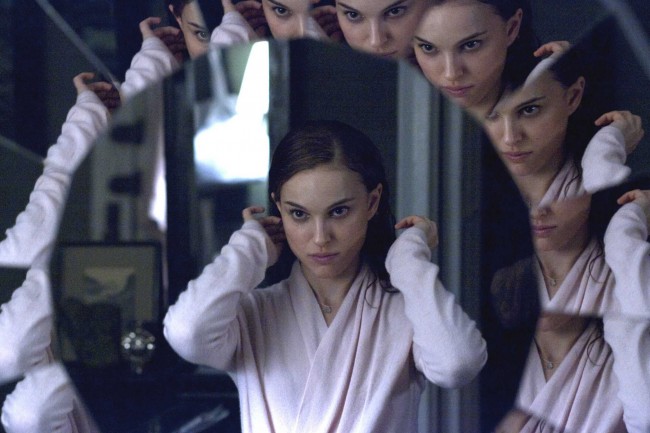 Director Darren Aronofsky likes to strap his characters onto a psychological torture rack. In Aronofksy’s newest picture, a tapestry of shadows wrap around the body of Nina (Natalie Portman), an aspiring dancer who passive aggressively claws for the lead in Pyotr Ilyich Tchaikovsky’s “Swan Lake“. Because the movie is set in New York’s ballet scene, the atmosphere of the film is pierced with musical notes that have the sharp edges of a razor blade. Nina’s style of dancing is strangely mechanical and yet, despite her inability to loosen up, she is forced to bend to the point of breaking like a string on a bass guitar. Aronofsky turns the pressure of being in such a prestigious production into a sort of thorny fairy tale that the brothers Grimm would be proud of. As Nina winces, stumbles, and collapses while dancing, shadows cut across the screen with the subtlety of a buzz-saw. Things of unknown nature are perforating the mind of our protagonist, and it’s clear to see that her sanity is being peeled back like the lid of a pull-top can.

Not all of Nina’s problems are her own, we suspect, as another dancer (Mila Kunis), with serpentine motives, slithers into the concave psyche of our nimble hero. Additionally, the director of the production (Vincent Cassel) keeps the drum rolls of derogatory slurs coming. Not even when at home is she able to remove the harnesses of stress from her weary limbs; Nina’s mother (played by a most unsettling Barbara Hershey) may or may not have ulterior motives for her daughter’s career. She is so creepy, in fact, that the character practically becomes a perverse hybrid of June Cleaver and Kathy Bates’ character from “Misery”. Essentially, if any fructiferous situations arise, they are surely burrowed into by a worm of some unknown nature.

Because Nina has a certain doe-eyed meekness about her, there is, the director of “Swan Lake” assumes, a sort of carnivorous evil that lies within her that he wishes to unearth; the white feathers, as the title suggests, must molt. “Black Swan”, as many lazy film critics will point out, is partially reminiscent of Powell and Pressburger’s “The Red Shoes”. There is a cool indifference in some of the characters’ eyes, a sprite hiccup in their step, and a morose sensibility about them that is less tactile than tenacious. That’s all well and fine, but the mood of Aronofsky’s “Black Swan” pulls more from Dario Argento’s “Suspiria”; between the ostensibly evil ballet instructor and the curious surroundings of the dancers, the colors on Argento’s canvas seem to bleed onto Aronofsky’s vision, intentionally or otherwise.

Natalie Portman’s performance in “Black Swan” is as terrifying as they come. Portman’s idealistic uncertainty, coupled with her ivory smile and quivering brow, paint her with a certain fragility. The roots of this warm tree, however, is where the artifice ends and where the cold, dark soil begins. Aronofsky’s films look what composer Krzysztof Penderecki’s “The Dream of Jacob” sounds like. If you have never heard the song, but want to know the pacing and the contents of “Black Swan”, give it a listen. Some have argued that Aronofsky is a little unfocussed on his newest project, unable to say what he wants to without having manic, broad strokes. In the way that the director launches his brush, ever so restively, over his film is indicative of his characters and their lack of control, not so much his own. “Black Swan” is about the toll following your dreams takes on your soul – it’s the anti-”Rudy”.

While not completely flawless, “Black Swan” is definitely, in my opinion, the best directed picture of the year. There is a sense, while watching this film, that someone has cracked open a cornucopia of malaise with a sledgehammer. This movie raises a question for me: if you follow a rainbow, after so much color has been used to paint it, is there nothing left but an empty paint bucket and a monochrome destiny at the end of it?