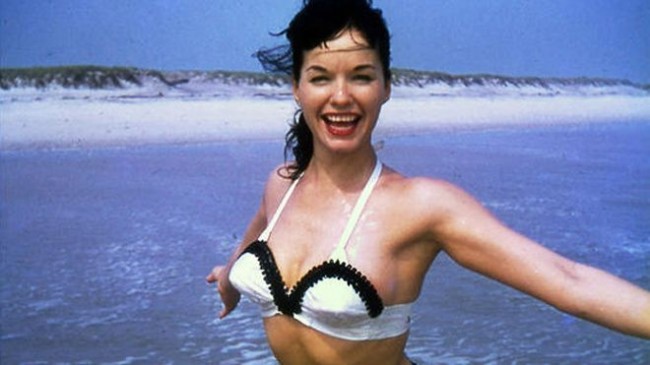 Bettie Page’s flippant cascade of hair, pouring over her forehead in a coy, puckering expression of cavalier openness has become synonymous with the taboo architecture of the 1950s and beyond. Whether posing with open arms and breezy bathing suits or slithering around in the leather-laden recesses of eyebrow-craning acts of bondage, Page was an actress that enjoyed the trained spontaneity of modeling. In Mark Mori’s lengthy, nearly moribund documentary, the director plucks weathered memories out of photographers heads, interviews a host of Page fans, and culls legions of photographs from the model’s archives. The cult icon herself, however, never appears in the film. Her detached, sometimes morose voice hums over dusty photographs and puttering archival film.

Mori’s quixotic documentary preens its topic by letting Bettie do most of the exposition. A talking head will appear, once in awhile, to rub their temple and observe some frayed and folded recollection, but a great deal of the running time is spent with the spectral, throaty growl of the pinup herself. The information isn’t always intriguing, but hearing Page’s voice ebb and spike while explaining different sequences of her life is the true lexicon of the film. At nearly two hours, however, the documentary feels a little bloated and inert.

Much of the exploration feels like Mori made the project with Windows Movie Maker. Images blip by, accompanied with stock music that sounds pulled out of a Sims game. There are dubious editing choices, ugly fades, and aesthetically nauseating neon yellow font. Visually, the documentary looks like a high school senior uploaded it to Youtube after one semester of film class. You don’t have to be Errol Morris or Werner Herzog, but your provocative, soul baring project shouldn’t look like it was made with the help of Microsoft clip art.

Volleys of Page supporters inundate Mori’s puff piece documentary, but where are the venom-dripping fangs of her moral opponents? To create an interesting, more fleshed out perspective on the icon’s legacy, there should have been interviews from both sides of the fence. Retired photographers can wistfully remember their good times with Page, but, academically, this isn’t much of a deft examination of the rigid, strident era of censorship that the model worked within.

While Bettie Page Reveals All shows the icon as more than a brand, the sloppy, staccato footing employed by Mori does little more than curtsy its subject when he should be exploring its social and cultural significance. As a definitive work on Page, this documentary is toothless fan mail. Bettie is regarded as a venerable touchstone of sexuality, someone whose simplicity was also enigmatic. The dichotomy continues to fascinate because of its tactile and yet mysterious nature. Instead of raising questions, this documentary would rather blow plastic noisemakers near your ear to celebrate. No thanks.