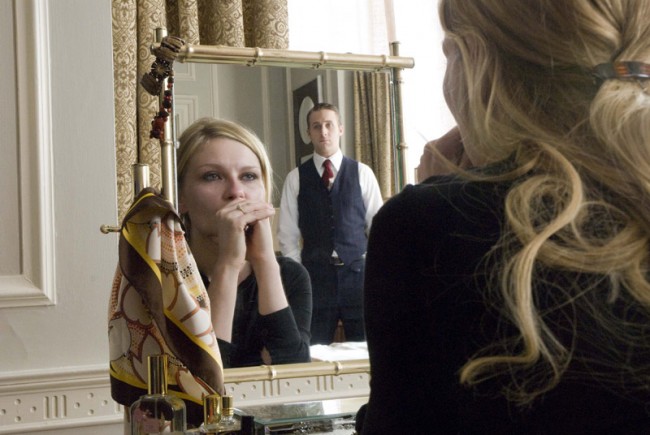 I had not seen Kirsten Dunst for sometime. I had thought she was in the belly of a whale somewhere. Perhaps the actress was busy toiling away on a time machine to go back and undo “Marie Antoinette”. Then I hear about this movie, “All Good Things”. I hear that it has Ryan Gosling in it, that Kirsten Dunst may or not be in danger, that the movie is dealing with serious subject matter. I then start believing that maybe “All Good Things” was a documentary about the disappearance of Kirsten Dunst by the hands of Ryan Gosling! Well, I was wrong; this was nowhere near as entertaining. “All Good Things” plays like a made-for-television version of “Sleeping With the Enemy” – only the aforementioned film was much better because the antagonist had a Mike Schmidt mustache (or a Joseph Stalin mustache, depending on your historical preference). Ryan Gosling plays the husband of Kirsten Dunst, and though he doesn’t have a burly mustache, he is still creepy in a boyish unhinged kind of way. The two are having the type of marriage that a tornado would avoid going near if it were to swirl about in the area.

This film is based on a true story, uneventful and bad as it is, so you have not only the filmmakers but the real people to blame for this movie being made. If the real guy had not had such a poor moral compass, we wouldn’t have to watch Ryan Gosling throw things at bookshelves (I’m waving my hand at the heavens right now – one hand anyway, as the other is typing). “All Good Things” is like a Lifetime special, only it doesn’t benefit from engrossing commercials or a floating logo at the bottom right hand side of the screen – and believe me, that thing can distract you when things go poorly. No, we’re stuck with Ryan Gosling behaving like a toddler and Kirsten Dunst acting like…well…I haven’t quite figured that out yet.

I’m not sure what happened to Gosling. I’m guessing that, since he is the lead singer of an indie rock band called Dead Man’s Bones, that he was studying the sheet music of his group’s compositions thinking that it was the screenplay for “All Good Things”. The actor looks so perpetually confused that I’m sure the director of this movie was using a laser pen, in an effort to guide him like a house cat, so that he would follow orders on set. This is such a bad performance that I want to blot his name out of the credits, like the government does to classified military documents, so that no one remembers that he was a part of this atrocity. Kirsten Dunst gets a little bit of slack from me, especially since I’m glad to see that she is still alive, moving. “All Good Things” is also a tragedy because it exploits its actors (you’ll know the scene) for no good reason whatsoever. I guess I have seen worse films this year, but none more disappointing. I expect more from Gosling than several scenes of him yelling and throwing things in a house. Maybe these are outtakes after he realized how bad the film was, and the director just decided to use the footage in the actual film.

If you’re going to see a Gosling film this year, see “Blue Valentine”. If you’re going to see a Gosling disaster, see “All Good Things”. The film is going to be the best five dollar DVD at Walmart ever! They will probably make it a package deal with “The Hand that Rocks the Cradle”. I’m hoping that Dunst’s next picture, “On the Road”, based on the Jack Kerouac’s book, will be better. But with Dunst’s luck, she’ll probably play the font in the film. Oh well. If you find yourself thinking about watching a crime thriller with elements of boredom and passive aggressive spousal abuse, you could do better (still talking to you, cable television!)