Home » Film » A Letter to Momo

A Letter to Momo 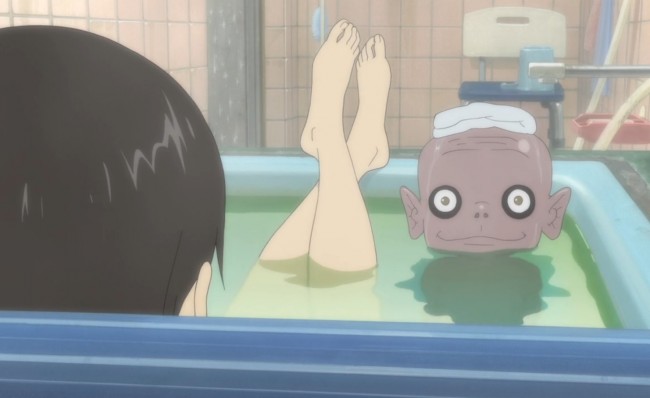 Hiroyuki Okiura’s pastel swept yarn is an eccentric, emotionally debilitating dive into self-doubt, skewed modality, and grief induced psychosis – the perfect kids movie! In A Letter to Momo, an eleven-year-old girl moves to an island, soon after her father’s untimely death, and internalizes her crackling guilt. Unable to process the insurmountable anxiety of losing her dad, Momo’s disquieting loneliness manifests itself in a delusional paranoia. Ancient goblins begin to follow our protagonist, shadowing her every move. These creatures – bulbous features, gangling limbs, theatrical behavior – steal bushels of fruit and take impassioned bathroom breaks in Momo’s home. Because only our young protagonist can see these mythical entities, Momo’s mother is unaware of their tumbling presence. If you can imagine Drop Dead Fred as directed by a fan of Hayao Miyazaki, you may get the idea of what’s going on here.

The animation isn’t bad – there is definitely a sense of weight and physics that are convincingly employed – but the pacing is so brutally placid that I pined for an abacus to count down the minutes until the movie was over. The psychology of compartmentalizing and dealing with loss is given a flippant iconology, but A Letter to Momo still feels laconic and inert. At a moribund two hours, Okiura’s exploration of grief and fantasy becomes a sort of clumsy and overstayed waltz. Even the bumbling humor seems weirdly deplorable. During a scene in the film, one of the dead-eyed creatures emerges, slowly, from the bottom of a bathtub that the eleven-year-old girl is bathing in. She shrieks, and lobs the oafish goblin from the bathroom. Uh, what?

Later, there is a medical emergency that strikes Momo’s home, and she urges the Silent Hill-looking creatures to help her. Of course, all of this is a psychologically charged examination of loss, built against the framework of butt-scratching jokes. And while the animation carries the story the best it can, the immeasurable depths of loss, crosshatched with inaccessible and tiring pacing, doesn’t help A Letter to Momo’s warbling and uneven tone. The film – opening Friday, September 4th at the Ken Cinema – is an uneasy mix of bizarre sight gags and unabridged gloom that never seems to come together.