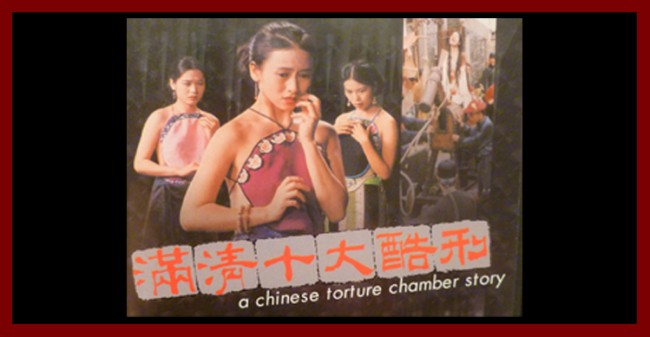 My little column turns twenty posts old today, and what better way to celebrate than by reviewing the most ridiculously sleazy Hong Kong exploitation film I have ever seen?

The story is simple enough. It takes place during the Qing Dynasty. Young scholar Yang is enamored of his new servant, Little Cabbage, mostly because she has tiny feet. While he is out of town for a few days his jealous wife marries Little Cabbage off to a villager named Got. Then she and her secret lover, the son of the town magistrate, frame Little Cabbage and Yang for the murder of Got. The government then tries to torture a confession out of them.

All right, all right, that doesn’t sound too bad.

Until all of the details filter in! Yang’s wife is terribly oversexed, and he must strap her into the “four instruments of lust” to satisfy her. Got has the biggest penis in all the land—not even hookers will have sex with him, because it would kill them! He has to unroll it out of the bottom of his trousers just to pee. And so, of course, the evil lovers murder him by adding aphrodisiac to his medicine, causing death by blood-geyser penis explosion.

Oh, and on a journey through the woods, Yang meets the most amazing people in the entire film: Win Chung Lung and his wife, a pair of flying kung fu artists who battle each other on a daily basis. All of their kung fu moves are, of course, insane mid-flight sexual attacks like Oral Attack and Wonder Screw. Their furious copulation can set sparklers off in the trees.

Interspersing all of the gratuitous sex scenes are gratuitous torture scenes. The storyline is told piece by piece as Little Cabbage and Yang are tortured by the magistrate and encouraged to confess to Got’s murder. The tortures are mostly just gross-out, with increasingly elaborate devices like the Standing Cage, in which one is hung by the neck in a large wooden cage, or the unnamed method in the opening credits, in which a man is buried in sand, his head split, and a milky substance poured into the cut. This, of course, causes him to FLY OUT OF HIS SKIN. I might know the name of that method, except the subtitled version of this film has a habit of dropping the subtitles when the narration gets too long!

And really, that brings me to the shining glory of this film. The subtitling. The wonderful, wonderful subtitling. At times I wondered if the crew in charge of the DVD features just ran the script through an online translation engine. The plot was funny enough, but the subtitles had me cackling in B-Movie glee.

“Did you hooked with Yang?” (the interrogating magistrate)

“Young Master seems loving me, but we didn’t have any adultery!” (Little Cabbage’s frequent plea of innocence)

“How dare you take my wife’s advantage?” (Got, pre-explosion)

As if that weren’t enough, in addition to the flying sex fu masters, the penis explosion, the outrageously exploitative sex and violence, and the subtitles: the director also gives us a scene parodying the movie “Ghost.” Yup, that “Ghost.” Heavenly light filters in through the window and a Chinese version of “Unchained Melody” begins to play as Little Cabbage steps up behind her husband, Got, and wraps her arms around him. Only instead of helping him shape a piece of pottery, she gives him a slow motion hand job.

That’s all I can really say about it, folks. Beyond that, the film can speak for itself.