In Snitch, The Rock Isn’t What He Seems 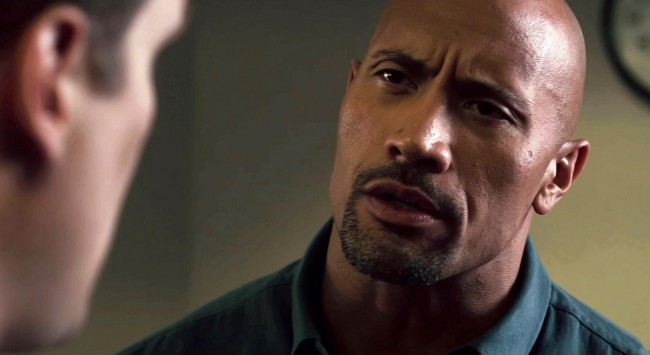 Alright, look, I like The Rock. I have ever since I saw him in the Get Shorty sequel Be Cool, which is otherwise forgettable. He single-handedly saved every scene he was in, but ultimately couldn’t do much for the film as a whole (the people who made that movie should really praying for their souls after rehashing the Travolta/Thurman dance sequence from Pulp Fiction, which was unbearably bad even then). But, man, he was good in that. He was charming and honest and having fun. This is true for every film I’ve seen Dwayne Johnson in since then.

But, honestly, I’m worried for his career. I don’t want to see him turn into another Sylvester Stallone/Arnold Schwarzenegger/et al. Already, critics, fans, and moviegoers in general are crying that Snitch isn’t what they’d hoped it would be. Continuing with this review’s theme of honesty, what these people honestly wanted was another generic action movie ala Johnson’s performance in the Fast and Furious films he’s participated in.

To these people, I say grow up, and let The Rock grow up.

Because he won’t be around for very long, in the grand scheme, if the only thing you guys let him do are these boring, over-hyped and under-thought action pictures. I’ll cut to the chase here and say that I was pleased – pleasantly surprised – with Snitch. It wasn’t the fast-paced high-octane beat-em-til-they-bleed action movie I’d anticipated. Instead, Snitch plays more like a drug world, gangland drama. Albeit, it’s only moderate in the drama element (the filmmakers are trying to play it safe in that regard, to test the dramatic waters with Johnson), but it is effective.

The story revolves around John Matthews (Johnson), who’s son is arrested for trumped-up drug dealing charges. As the allegations made against Matthews’ son are mostly fabricated, he isn’t able to snitch out his accomplish (see where they got the title?) to lessen his term. So, instead, Matthews volunteers to bring down some bad guys on his son’s behalf. The following is nearly two hours of careful blue-collar espionage the ultimately culminates in a car chase scene that isn’t as bad as most the others I’ve seen in the last five years (A Good Day to Die Hard, I’m looking at you).

Dwayne Johnson is great in this movie. Despite his gargantuan build, he tones down his character here as compared to his other roles, insisting on not playing yet another tough guy. That isn’t to say that his character isn’t determined to do whatever he can to help his son. And that’s exactly what he does. The film also has decent supporting performances from Barry Pepper, Benjamin Bratt, and Nadine Velazquez, although the best performance on the sideline is arguably Jon Bernthal, as a reformed drug dealer doing whatever he can to stay clean and provide for his family.

These two characters provide the entire basis for the underlying drama, and the juxtaposition is fantastic. Here are two men, the first, after serving time in jail on drug charges, is determined to keep himself focused so he’s able to care for his wife and son. The other, after learning of his son’s incarceration, is faced with no other decision but to delve into the murky waters of drug smuggling to help his own family. Two men, the same goal, but different methods, and they find themselves in a situation where they have to rely on one another to do what they need to do.

If you don’t want to look at the film as analytically as I do, the surface drama is that of the anti-drug dealing legislation and its misuse in the guise of a drama-thriller. Either way, the movie is effective, and it’s a fantastic opportunity for Johnson to flex his muscles (no pun intended – or is there?) in a genre other than straight-forward action. This is a welcome opportunity, to me at least. Anyone else who’s still complaining, I offer the same advice as mentioned: Grow up.