Ladies and Gentlemen, I Give You Explosions and Stuff! 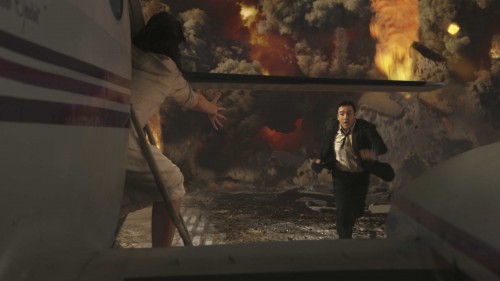 You have directed some monolithic films in your career that, when taken at face value, pose no direct threat to your audience. You do not lodge existential quandaries in your characters’ minds. And you certainly don’t want your protagonists to act in logical, self-preserving ways. When browsing over your resume, I realize that you have directed a lot of explosive, maniacal films that deal with the earth crumbling under its own axis. “Independence Day” and “The Day After Tomorrow” make me realize you’re not one for eclecticism. And now, with the grandiose release of “2012”, you have settled back into that cozy, warm place of yours that involves bombastic scenes of fire and brimstone. I’m pretty sure, at this specific juncture in your career, you have blown up every iconic landmark of humanity, from the White House to the Eiffel Tower. Some directors, like Ingmar Bergman for example, liked to explore the fear and psychosis of man. You like to explore the possibility of how many buildings can blow up in one frame. I bet you would be great at directing the History Channel program “Life After People”, in which computers generate scenes of a post apocalyptic world in ravishing detail. Some of us shoot higher than others, I suppose.

Despite my grievances with your body of work, I am glad that you stuck to the basic disaster movie structures. I realize now, especially upon watching “2012”, that you can fix any marital problems by saving humanity. I also realize that, when John Cusack is at the wheel of a vehicle, he can drive it through any type of natural disaster, despite the automobile’s model and weight. This, combined with Cusack’s ability to make the aforementioned vehicles impervious to damage and tire blow-outs, has given me a new outlook on safety during crisis situations. I will make sure to knock on Mr. Cusack’s door the next time the earth implodes.

And how about Danny Glover’s performance as the President of the United States? I wasn’t too sure about why he whispered throughout every scene, but I was glad when he made a Bill Pullman type speech during the end of the film. I am also glad that, even though situations arise where your characters are only given a limited amount of time to succeed, they spend approximately seventy-percent of it to kiss, coddle, or squeeze their significant other. Stupid, but it fits the mold. In fact, you manage to break open an entire pinata of cliches during the run time of “2012” – at least you’re consistent.

Mr. Emmerich, I should also bring up the pedestrian humor in your film. There were jokes that, to my recollection, weren’t very good. When watching the White House evacuate due to the enormity of the crisis at hand, I suspect that a character would not quip “it’s about time they cleaned out that place” before a wave decimated the structure. But then again, you are the same man that, in the heat of the moment, had Jeff Goldblum light up a cigar before blowing up an alien spaceship in one of your films, so I digress.

Your movie is more of a computer graphics class than a cohesive, interesting film. By the two hour mark, I felt desensitized and bored of watching buildings topple over into nothingness. If anything else, I suppose your movie, at the very least, could be used as a really elaborate screensaver.

In the future, I can see you directing a film where the universe gets catapulted into a large bomb built by extraterrestrials. Or maybe you could make a revisionist history movie where Jonas Salk invents a monster instead of a polio vaccine. The possibilities are endless.

In closing, I hope that if you do use computer graphics in another movie – I know you will! – please use them to create children actors, since the ones you actually cast behave like inanimate objects. Otherwise I really don’t have any concrete advice for you, Mr. Emmerich, and feel the need to close out my note.

There is really nothing good about your film. The thing is monotonous, bloated, showy, outrageous, boring. And if you ever scare me again with the prospect of Amanda Peet boarding an ark that saves humanity, I will never forgive you. Please let it be known.