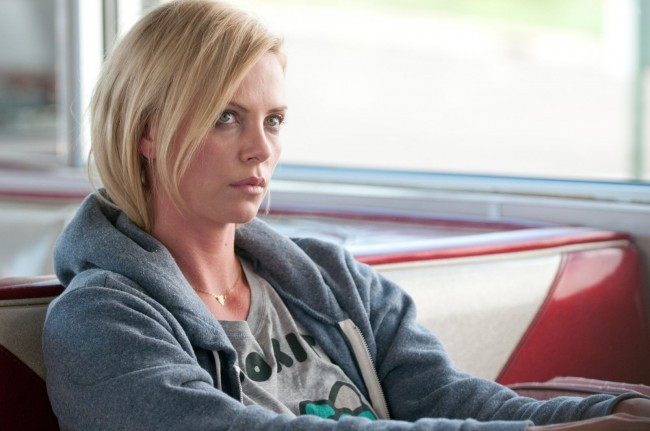 Counterculture queen Diablo Cody cuts her teeth on dialogue that is rife with alliteration, hipster-like musings, and fanged insults. Many would think her writing is a modern, barbed version of Howard Hawks’ spitfire snark. The reality is that Cody’s banter is young, angst driven, and spattered with acid tongued wit. None of it sounds terrifically natural, mind you, but in the time of Facebook and Twitter, where premeditated quips are steadily becoming the norm, young audiences are attracted to Cody’s language modifiers. Teenagers and twenty-somethings aren’t attracted to naturalistic dialogue so much as the bubblegum wrapped arsenic that Cody’s ink spills.

You would think, then, that Cody would be perfectly at home in a story about the once plucky, now disenchanted Mavis Gary. An aging writer of young adult novels, Mavis wishes she could relive the alcohol basted days of her youth. Instead of processing her emotions, Mavis instills a repetition compulsion within herself; she is unable to let go of the past, her former glory as a letterman jacket jockey. This stunted mentality comes full circle, of course, when she finds out, via email, that her high school sweetheart, Buddy Slade (Patrick Wilson), has had a child with his wife. In theatrical fashion, Mavis plops her dog in her purse, roars back to her hometown, and attempts to have a spurrious tryst with her old flame. Clearly, Diablo Cody has seen Alicia Silverstone’s Crush a few times before.

While pining for Night Owl, Mavis runs into a action-figure collecting nerd played by the dog-eyed Patton Oswalt. Inconsequential shenanigans transpire, where alcohol is consumed and typical Cody dialogue is volleyed back and fourth, until obvious events come to a head between the unassuming Oswalt and the bedroom haired Theron. This story is the same romantic vehicle with a different color of paint slapped on, but you still know where you’re going. Ideally, this plot seems perfect for Cody to talk about The Strokes, Count Chocula, Grover Cleveland and Slimer Hi-C. Instead, Cody only periodically waxes philosophical about now defunct product lines and 17th century inventors. The new dialogue is slimmer, more realistic, less neon. The result? Something less bombastic and irritating but more curiously vacuous and boring. Cody dissenters now have nothing to wag their fingers at. Cody supporters are now wondering how they’re going to learn about Lou Reed.

Jason Reitman’s last film, Up in the Air, consisted of characters, much in the vein of Young Adult, that needed to emotionally progress. The difference was that the screenplay was sharper, the performances better, the themes more colossally universal. It can be argued that Up in the Air and Young Adult are important because they both deal with the fallout of emotions, the denial of adulthood, the pandering of 21st century America. Cody’s version of the world, despite working with the same letters, isn’t written with ink; it’s drawn with crayons. Simplifying the themes would be fine, though, if her screenplay wasn’t occupied by the ghosts of John Hughes’ past. Most of Young Adult is spun with the sardonic needle of someone who went to high school in the nineties but erupted with ire after missing the 1980s.

Despite the flatlining script, Theron’s performance is fine as she embodies the nonductility of the morose Mavis Gary, whose crumpled soul is a hub for everyone elses pain. Theron rolls around with the plastic gaze of a mannequin, as she sports her disheveled hair like a scarlet letter, letting everyone know just how vapid her life is. Was it this hard for R.L. Stine when he wrote the Fear Street series? For better or for worse, Cody’s screenplay doesn’t have the same gravitas that inflated Juno (the board game Trivial Pursuit wrote that film). Mavis’ attempts to have her salacious exchange with Buddy Slade happen without the help of Cody shoving inane dialogue about indie rock bands down her throat, thankfully, but at the same time no memorable dialogue replaces it. Jason Reitman can direct a much better film than Young Adult, but Diablo Cody wont be giving him the coordinates to it. Let go of the sidecar, Reitman. Time to find a new Tonto.