Kurt Cobain About a Son

Walking With a Ghost 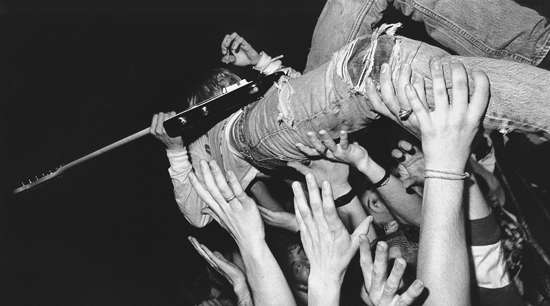 About a Son (2006)
Starring: Kurt Cobain
By Robert Patrick

I had some initial reservations about director AJ Schnack’s Kurt Cobain biopic, About a Son. Luckily, for all of my negativity and reluctance to accept this film, I found it was actually touching and sincere beyond my expectations. This, I thought, is a pretty damn good surprise.

The strangest thing concerning About a Son is the fact that it’s not really a movie. In fact, Schnack’s film takes Cobain audiotape interviews, plays them over fluttering images, and let’s the late grunge star spin his own myth through these eerie excerpts of mid-night conversations taken one year before the singer’s death.
It’s a weird phantasmagoria, really. You see broken down buildings, homeless people squabbling over some unknown possession, and then, eventually, some teens in Olympia, Washington hammering out some music together. Aberdeen, Seattle, and Olympia get put under a microscope, as director Schnack films some of the most eerie, unsettling crevices of those cities, attempting to retrace Cobain’s past, and to give an illustrative portrait to his words. Sometimes his tactic of lackadaisical filming is a perfect canvas for reflection, sometimes it’s yawn inducing, but it’s always thoughtful.

What makes this documentary, and I mean what really makes it, is the quality of the interview. Cobain, throughout the entirety of what we hear, is completely intimate with his subject. He rarely pauses, rarely restrains, and rarely tells you something you don’t believe. In knowledge of the interviews being taped during the hours of midnight and dawn, there is a sense of inner darkness, an inadvertent stream of consciousness that maybe, if these interviews were done in the daytime, we wouldn’t have been exposed to.

It’s not often, even in real life, that you take everything you hear from someone as face value. While I listened to Cobain I felt myself agreeing with him, even if I didn’t necessarily know why, I think much of this is due to Cobain’s frank, no bullshit attitude that he had both in life and on these tapes. It’s an attitude that director Schnack and journalist Michael Azzerad channel perfectly within these 90 some odd minutes of film time, giving us an unprecedented portrait of this man and his dreams.
The soundtrack of About a Son is mesmerizing in its own right. Walking through bleak, passing notes, we’re given a soft, unexpected score from Ben Gibbard among others.

About a Son, is, without a doubt, something that makes you feel privileged and sad. There’s a feeling that, after you watch this film, you have had a strange connection to the man, one that is as fleeting as the nights in which he spoke on these static driven audiotapes.

What a strange, unforgettable dream.