Boom! Studios’ new futuristic sci-fi detective noir Turncoat is a sub-genre combination I’m not ashamed to say I never even knew I wanted.  Thanks to the fortuitous pairing of Paknadel and Trakhanov, I now know better.  The story takes place on a futuristic Earth whose society has been, for generations, completely dominated by alien colonizers referred to as “Management.”  After intel is provided to a group of human resistance fighters by our protagonist and former Management cop Marta Gonzales, they gain their first real decisive victory over the alien occupiers.  This is the catalyst that finally causes Management to decide to leave Earth.  The book opens with this victory and follows of Marta (who, post management departure, has become a private investigator) as she tries to solve an increasingly suspicious missing person’s case.  I would not call this book pretty, but that is not a bad thing, and is in fact absolutely by design.  The characters and dialog are colorful, the world is gritty, the story is very well crafted, and the art compliments it all perfectly. 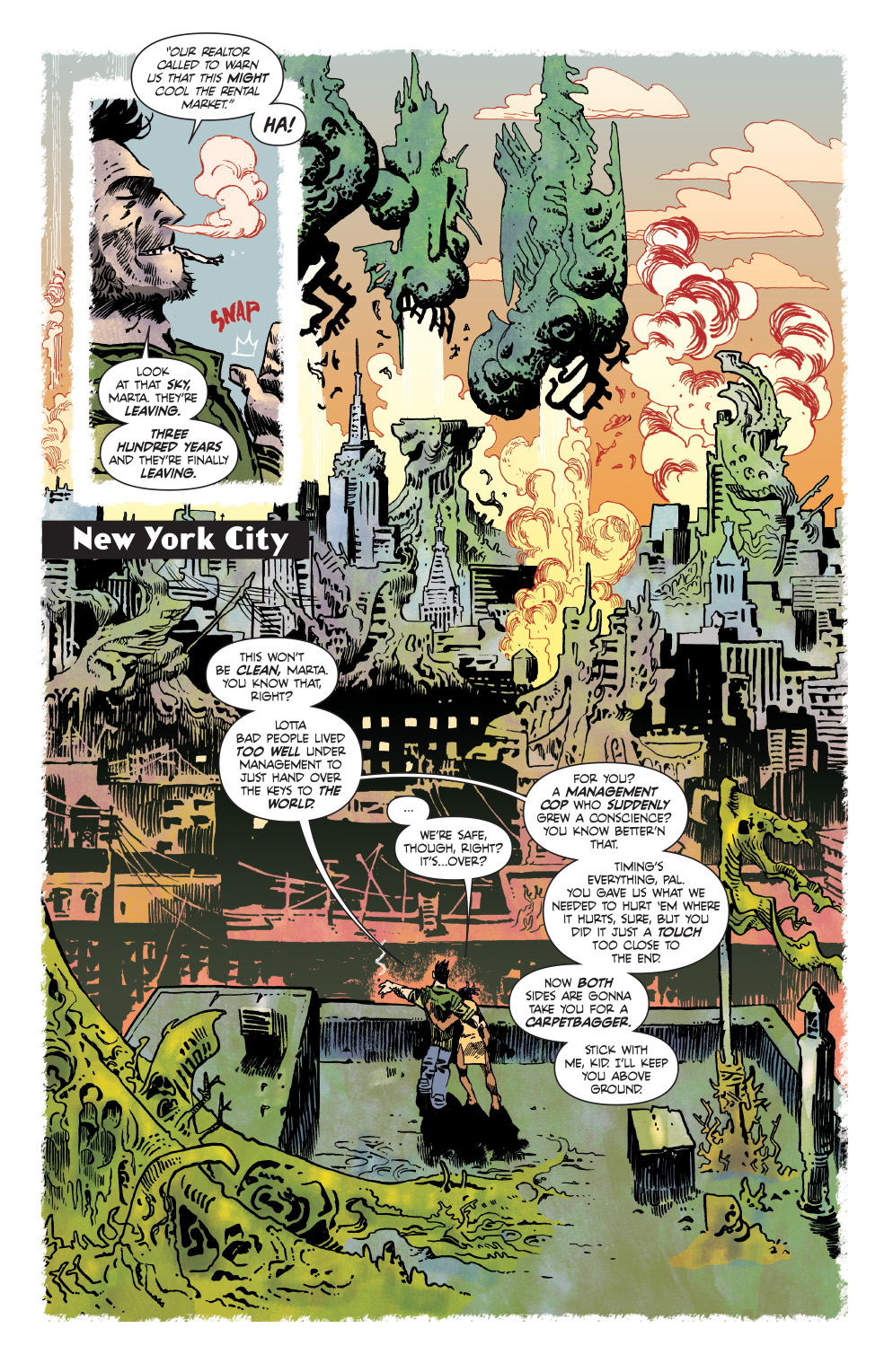 While it is accurate to describe the world of Turncoat as futuristic, it likely is nowhere near what that description would cause you to envision.  This is not some sleek neon utopia, covered with outrageous chrome mega structures.  The world of turncoat is a grimy, biological, alien mess that lends itself perfectly to the noir setting.  It seems like almost every tool, gadget, or piece of equipment is some purposefully grown organic organism or creature, and there are very little in the way of mechanical or electronic looking components left (even the drugs are little buggy creatures).  It is a world struggling to find its own identity again after such a defining and long standing societal influence has been so abruptly removed.  It very quickly becomes clear that while Management has left, the shadow they cast was long, and their abandonment of Earth is far from universally regarded as a victory.  The world is still very much the one the Management’s presence created and there is a good chance that, to some degree, it always will be.

While the world of this comic does feel like a very fleshed out living thing, don’t expect all of the information about it to be served up to you on a silver platter.  Paknadel does a wonderful job of abandoning exposition wherever possible in favor of trusting readers to be able to piece together information through dialog and context clues.  As a result, that does mean some extra attention is required when reading this book.  If you are planning to just passively gloss over pages you will miss out on a lot of the complexity and subtlety the story has to offer.  Trakhanov gives this world just as much of a voice with his art as Paknadel does with his writing.  His loose style coats the page in texture and fills the characters with personality.  He integrates his alien organisms into the page in a way that feels both natural and jarring at the same time, almost reminiscent barnacles on a dock.  You look at them and they are obvious, you can’t miss them.  Even in recognizing that they are foreign and don’t belong there, however, they don’t necessarily look out of place.

Turncoat is a comic comprised of an odd genre mash-up easily capable of clashing with itself and losing the reader were it in the wrong hands.  Luckily, Paknadel and Trakhanov are definitely not the wrong hands.  This is an unconventional sci-fi story, written as an old detective noir.  It comes complete with all and layers of grit, grime, and hard-nosed fast talking characters straight out of the 40s that you would expect from that particular genre.  It also prominently features the complex and well-crafted world building you would expect from any good sci-fi.  In that alone it has enough of a fun premise and fresh take on classic tropes, that the adventurous reader looking to ditch the capes and cross overs for something a little more unique, need look no further.