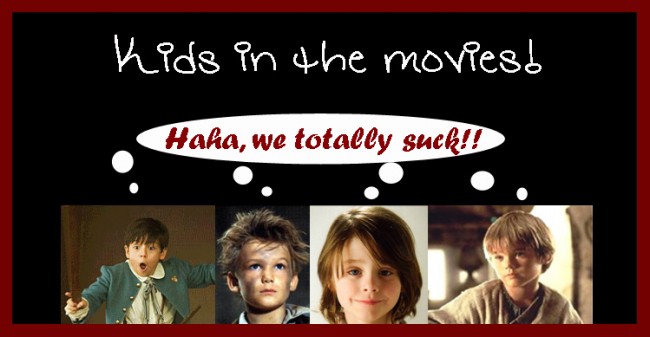 What else is there to say? Let’s kick this off this miserable list with my first miserable example. In no particular order…

ONE: Freddie Boath, THE MUMMY RETURNS

This unfortunate young child plays Alexander O’Connell, the highly unnecessary offspring of Rick and Evy O’Connell. The charm (yes, the charm!) of Rick and Evy kind of revolved around their childlessness. Rick was the self-serving drifter, roguish and lovable. Evy was an excessively bookish librarian, nerdy and adorable (Rachel Weiss I love you!).

And then… the kid. The kid ruins everything! I don’t want Rick and Evy the parents! I want Rick and Evy the independent adventurers! And to make matters worse, they’ve produced an outrageously annoying kid. A know-it-all brat of the worst sort. He launches himself into danger, talks back to the powerful quasi-immortal villain (which seriously undermines the threat of the villain, okay?), and generally just makes me cringe every time he shows his obnoxious little face on the screen.

Suffice to say, I didn’t even bother seeing the third.

Did you see this movie? I bet you did. And I bet you thought you’d leave the theater laughing up a Tom Cruise performance.

But it turns out you couldn’t even contemplate his role in the film because you were blinded, BLINDED, because the sounds of Dakota Fanning shrieking and crying every five seconds had entered your ears and invaded your brain and spread to every other sensory receptor in your body! So you stumbled out of the theater, groping wildly for hand holds because your vision had gone black, your ears were ringing with remembered screams, your tongue was lolling, your left arm had gone numb, there was a sharp pain in your chest—

Oh, and also there was the scene in which Zorro has to save a crowd of people from being run over by a train. Because apparently they couldn’t just, you know, get off the tracks.

In all honesty, I don’t remember much about this movie, or this kid’s performance in particular. I saw it once, in the theater, which the internet tells me must have been back in 2006.

What I do remember is that I spent a lot of my time in that theater gazing vaguely into space, wondering when Kevin Spacey was going to come back on screen because I certainly had no interest in Superman’s baby mama drama.

To me it isn’t the child’s performance, but what the child represents: the owners of a franchise aren’t exactly sure where to go with it, so they decide to inject some youth into the series, and they bone it, they totally bone it! EVERY TIME.

He’s not exactly a kid. I don’t care. I don’t even care what his real name is. Goddamn Mac Guy.

I love John McClain. I love him! I grew up on the Die Hard films (as well as quite a bit of Schwarzenegger, if you couldn’t tell) and Bruce Willis kicks ass. It’s a simple formula, Bruce Willis + conflict = BRUCE WILLIS WINS. You don’t need to add the freaking Mac Guy to appeal to a younger audience or some crap like that. Bruce Willis wins. That’s all you need to remember. BRUCE WILLIS WINS.

Are you sensing a trend here? I can handle Poison Ivy versus glue lips. I can handle Bat Nipples. I grin in delight at every awful line of dialogue emitted by Mr. Freeze (“LET’S KICK SOME ICE!”).

EIGHT: Shia LeBouf, INDIANA JONES AND THE KINGDOM OF THE CRYSTAL SKULL

Kill me now. This represents every horrible movie filled with horrible children ever made.

Okay, maybe this is a little spoiler, but I figure if you’re into Hellboy then you’ve already seen this, and if you’re not into Hellboy you don’t really care.

Unborn Half-Breed Child (or, I suppose, UHBC) is, at this point in the series, only POTENTIAL trauma. This enterprising little blastula is dividing rapidly, however, and even from the womb it has managed to infect the film with a schlocky, soap operatic quality I cannot stand. “The Golden Army” has its great moments (Angel of Death, anyone?), but it is crippled by an uninteresting villain and a pervasive campy domesticity.

UHBC, you better be a creepy monstrosity from the depths of hell, because if you spring into the series at age eight, with a snotty, know-it-all attitude and a propensity for dragging your parents into unnecessary danger then I give up, I just give up, the movies will have finally defeated me and I’m going to live out the rest of my days a bitter recluse peeking through my window curtains now and then to mutter about the good old days when brats listened to their parents and loveable rogues didn’t settle down and raise a family!

Example One: “Toy Story.” A kid’s movie without any kids in it. ROCKIN.

Example Two: “Who Framed Roger Rabbit.” A movie about cartoons… you got it: without any kids in it!

Example Three: “Look Who’s Talking.” At first it’s like, oh no a movie about a talking baby… then you realize the baby is voiced by Bruce Willis, and BRUCE WILLIS WINS AGAIN.