Wunderkind of the Wilderness 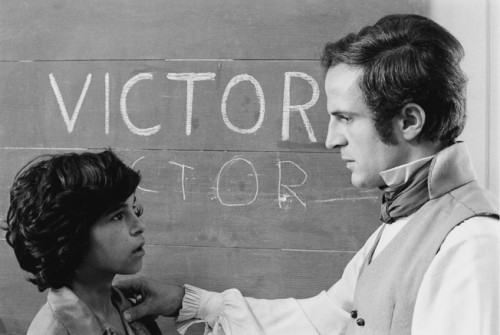 A mop of twig-infested hair bobs around a forest, attached to it is a boy, no older than twelve years of age, who is animalistic in nature. The child paws a tree trunk with his weathered hands, scurries over foundations of rock, and slithers beyond a utopia of underbrush. This feral boy, played by Jean-Pierre Cargol, is the basis of famed director François Truffaut’s 1970 film, The Wild Child.

The movie begins when the unkempt youth, being spotted by a villager collecting berries, is captured by local townsfolk. Because the boy speaks in unintelligible grunts, hops along on all fours, and fails to communicate even on the most basic of levels, he is seen as a primal beast. Young adults in the vicinity, unable to comprehend the notion of humility, prod the feral child with sticks and other undesirable objects. Eventually, with the kindest of intentions, a doctor by the name of Jean Itard (François Truffaut) attempts to help the boy molt his primeval instincts. The feral child, who the doctor names Victor, is capable of advanced understanding, we find. And throughout the film we witness the trials of this wide-eyed boy, straining vigorously to retain knowledge, press the very limits of his abilities to learn.

The movie, carefully shot with supreme care for its subject matter, reveals boundless amounts of enthusiasm throughout each frame. Victor, being volatile and inattentive, recklessly destroys the doctor’s neighboring possessions. Later, during more extensive tutelage, the boy begins organizing letters, then words. The tedious, maddening methods in which Itard teaches the young boy is rarely selfless, we realize. In his notes it is revealed that Itard gains explicit pleasure from helping the child with ideas of morality and justice. Truffaut’s lens, directly channeling doctor’s obsessive preoccupation with the child, makes the audience feel the same acute fascination with the boy. For such a small scope, the movie gives a monolithic examination of human emotions that other directors, notable or not, would have a difficult time presenting.

The story, lifted from real events, Truffaut revealed, resonates because of its thoughtful juxtaposition of fiction and reality. The movie, an acquired taste for most moviegoers, is void of the archetypical lacquer that is slathered over most films. The screenplay is full of small, intimate human emotions that, in the hands of another director, would’ve been hackneyed embraces. In Truffaut’s The Wild Child, there is no theatrical denouement or clever plot twists bouncing off of the script; only sincerity and the need to bond, hopelessly, with the human spirit. Each scene, dealing with the slow mental advancement of a disenfranchised boy, entertains its audience by not teasing, manipulating, and pulling us down – a trick used by Truffaut’s hero, Alfred Hitchcock – but by simply making us feel emotionally connected to our characters through their subtleties.

Truffaut, in one of his rare acting appearances, embodies what it feels like to wad through a viscid body of doubt. Because there are so many undertones in this movie, each writhing and jolting beneath the celluloid, it almost feels unsettling at points to watch. Lucky for us, the sinister magic, so synonymous with the best poetry in the world, is up again, shining monochrome beams of light for film lovers to devour.

Playing again, for a limited time, The Wild Child is worth catching to explore one of the best auteurs at his finest.