Home » Film » The Tale of Despereaux

The Tale of Despereaux

What Has Four Legs and is Too Dark for Kids? 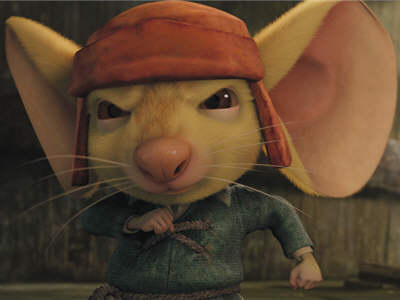 The Tale of Despereaux. This is a hard one. I consider myself to be well qualified to judge kid movies. Why? Because I have two young nephews and a niece, all of whom have rather distinct tastes in the movies they take in (surprisingly refined standards for toddlers), all of whom I am on a fair level of understanding with. So, for this one, I dusted off my old Jimbometer (yeah, this is a made up word, sue me – if EW can print the word bromance without getting firebombed, than we can use this one) and got ready to judge a kid movie on all the merits of a kid movie.

But it’s very hard to take Despereaux as a kid movie because it has a lot of themes that are too dark for said kid movies. The story, basically, is about a mouse that is noble to a fault. This mouse (you guessed it, he’s called Despereaux) is completely oblivious to the world of evil and shadows that surround his little mouse colony. So he ventures blindly forward into a journey that consists of a poorly constructed multi-character epiphany with unresolved subplots galore.

Tied into the tapestry of story are these little themes that cut a bit too deep to be taken lightly: a father that abandons his child because he can’t afford to feed her, a servant girl who wants to be a princess but is constantly reminded that she’ll always scrub floors, a king rejecting his entire kingdom to mourn the death of his wife, an individual who is ostracized by his community for being different and sentenced to death. Sure, these things sound pretty standard in the Disney camp, but the problem with Despereaux is they’re never made right; the children of the audience are never told why such things or wrong, how once can overcome them, or why one would be a better person if such obstacles were overcome.

During the course of the film, it’s too easy to get lost in the tangle of subplots. There’s a rat that starts off good, becomes bad, only to turn good again, there’s a vegetable man conjured up by a cook using what I can only assume is witchcraft, there’s a hungry, drought-ridden community, among many others. Most of these subplots exist only as plot devices and are left unfinished or unexplained. Believe it or not, the biggest unresolved line in the film is the main plot. As the story winds down to 100 minutes, it seems the production team realized they only had the budget for five more minutes. What happens? Well, they wrap everything up, of course, and somehow, everything is made right once more, the good guy wins, and we’re supposed to understand then that people who are different are okay, too. I’m not buying it, Universal.

To top it off, there’s nothing here for the adults to get into. There’s a trend in modern animated movies to feature something that appeals to the parents as well. They seem to have this odd brand of dual-sided humor that can mean one thing to children and something else completely to adults (Shrek, I believe, is thought to be the first to do this, but I know it goes as far back as Lion King at least, and all the best modern CG-animated films have them, movies like The Incredibles and Finding Nemo). This movie has none of that, so there’s nothing whatsoever to grab the parents except for those missing minutes of sleep they’ve lost trying to wrangle up the little rug-monkeys into bed at night.

The story, overall, runs about thirty minutes too long. This is only a problem because the film is too disjointed to follow and, because of this, fails to engage the audience. It gets really boring rather quickly. I can’t image even my oldest nephew sitting down for the entire hundred minutes, which is a serious flaw, especially sense the film doesn’t appeal to adults, and – let’s face it, adults don’t take their kids to the movies to repeat the phrases “shut your mouth” and “sit in your seat.” The filmmakers could have easily corrected the problem in length by trimming down (or weeding out) the numerous subplots, but God forbid they get rid of that bizarre vegetable man.

Despereaux is, of course, an animated feature in a time in which these computer-animated pictures are common. However, this one doesn’t have the pleasing aesthetic of the CG-animated flagship, Toy Story, or any of its successors. Instead, the faces are rendered in blocky style with wildly disproportioned features: long faces with long noses, tiny pinched lips, wide eyes and etcetera. This, I guess, is supposed to look comical but really only looks insulting to humanity in general.

And the fine actors who provide the vocal talent? Well, there are some big players listed on Despereaux’s bill sheet. Matthew Broderick! Dustin Hoffman! William H. Macey! Even Christopher Lloyd and Stanley Tucci take times from their oh-so-busy schedules to pay out some short vocal cameos. With such a star-studded bill, the film should at least have that working for it, but the sad thing is, none of them have distinctive voices. Except, perhaps, for Lloyd, but his character speaks so soft it could just be any other clown from the street reading his lines. As a result, all of the voices tend to bleed into one another. Even the fine Sigourney Weaver manages to read out her narrations in a dull monotone, boring the audience to sleep every time she opens her mouth.

The bottom line is I can’t imagine very many kids actually sitting down and enjoying this film. You know how kids always jump around after seeing the latest animated film? Full of energy and glee, cracking off the best jokes of the film to their little kid buddies and all that happy stuff? Well, the kids leaving this screening actually looked sad. Instead of being happy and ready to rock-and-roll back home for some mouse-induced mischief, they actually looked upset that they wasted an hour and a half on a Saturday morning with no jokes to regurgitate during the next week at school.