The Basically Okay Whatever 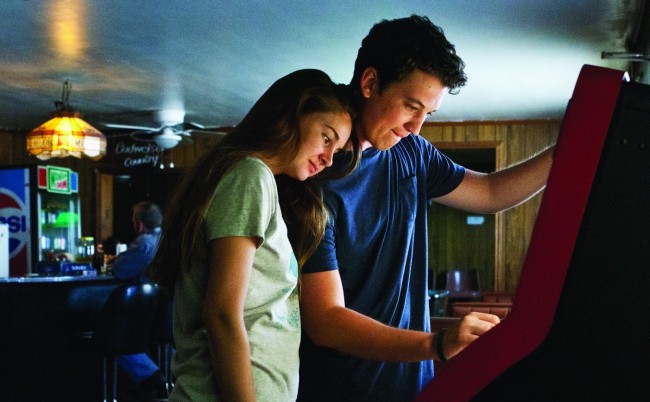 Movies about teens are usually shrink wrapped in sleazy, salacious, glass cracking abandon. At parties, bras zip through the air like volleys of arrows. Livers are brined because guttural howls must be had. And much like Sisyphus’ boulder, kegs are rolled back and fourth forever – or at least until the weekend ends. The other brand of teen films, more subdued than the latter, revolve around a well meaning, but indolent kid whose double helix is comprised of nothing but snark and sometimes barbed, but basically cloying, romance.

The Spectacular Now has the neat, innocuous aesthetic of a sweater vest while maintaining the blunt edge of a dull blade. The marketing is gloriously saccharine (the poster is an austere green that is only perforated by the specks of two teenagers, leaning closely to one another). This is the third consecutive film that James Ponsoldt, the director of The Spectacular Now, has made about alcoholism. His first, Off the Black, was a deft, emotionally visceral exploration of the human condition. Ponsoldt’s second opus, Smashed, was about grief, regret and self-mortification due to alcoholism. The third film in this pseudo-trilogy, The Spectacular Now, deals, this time, with a flask wielding teenager that carries around alcohol like Peanuts’ Linus would a blanket.

Sutter Keely (Miles Teller) is his school’s most popular party animal. His relationship with his girlfriend is watermarked by excess (carnally and otherwise). Sutter is an unreliable narrator, one could say, but we’re led to believe that he is more Prince than pariah. Our protagonist waltzes around, captivating his mousy friends, as he unsheathes his flask. When he isn’t publicly imbibing, he lugs around a giant soda cup filled with coke and spirits.

Eventually Sutter absconds from his popular girlfriend, meets a sheepish girl named Aimee (Shailene Woodley), and molts his catty attitude in order to become a more empathetic human – sort of. Aimee is basically an updated model of Diane Court from Say Anything…; self-deprecating, intelligent, largely sympathetic and headed to college. Sutter is bullheaded and irascible, but he is also kind and charismatic. Crazy formula, right? Yawn.

The interplay between Teller and Woodley works because the dialogue isn’t tenderized by a wily, flowery lexicon. Teenagers speak like teenagers. Nobody is lolling their tongues in desperation to form sentences, but nobody sounds like a Pop Up Video episode, either. The words exchanged between the two leads sound both organic and lived in, even if the android-like drama around them doesn’t.

The Spectacular Now’s script is weighed down by an egregious amount of unevenness. Problems arise that end up with tidy, nicely shaped bows. If you’re showing the bruises of a vice, you cant shirk the intensity of their marks by drawing up a smirk and a hug, three scenes later, to make your film feel more docile and congratulatory. That said, Shailene Woodley does such a fine job acting in this film that the marquee should be changed to The Spectacular Shailene and the Other Stuff That’s Okay (catchy, right?) Woodley bares her teeth in this film, grinds her molars, and masticates what everyone else is doing around her. No competition.

Aside from Woodley’s fastball swatting performance, there is little to be excited over in The Spectacular Now. The drudgery and the petulance of teen life has been articulated better, with more sincerity in the past. Spark Notes: Stay home.