The Skin I Live In

Marionettes Made of Tissue 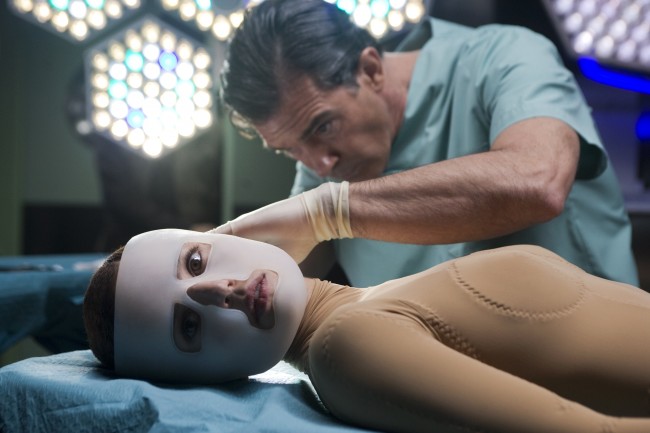 Moral compasses are caked with mud, emotions are pulled like teeth without anesthetic, and colors are spattered like paint cans perforated by bullet holes. The world of sixty-two year-old Pedro Almodóvar is one of ghosts, obsessions, frothy malaise. Never innocuous, the films of the Spanish auteur have always been met by a volley of mixed press. A perfect filmmaker without a perfect film, said the chorus of buzzards circling Almodóvar’s catalog of work. The director’s newest opus, “The Skin I Live In”, is sure to be stalled by dragon’s teeth and preemptive cynicism. The knee jerk criticism will be a paper banner that crowds will have to break through, however, if they want to experience one of the most visceral, furiously unhinged movies of the last two years.

The story is bleak, capsized by dismay, incalculably sad. “The Skin I Live In” revolves, primarily, around a deranged doctor (Antonio Banderas) and his large, impenetrable castle; a residence that looks somewhere between the muted, inconsolably haunted mansion in Alain Resnais’ “Last Year at Marienbad”, and the whitewashed interior of a modern infirmary. In the doctor’s house, imprisoned in a body suit, lives a woman, named Vera (Elena Anaya), whose masked features resemble that of a mannequin. Her nondescript, canvas-like exterior is used for the unethical practices of her captor, the doctor, whose primary goal, we’re told, is to create a resilient kind of tissue that defies the normal properties of human skin. “The Skin I Live In” is a ballet of terror – Elena Anaya, acting in a body suit, moves like a dancer, even when she is walking. The ball of her foot acts a launching pad to her swift, swooping movements; Anaya is like Cyd Charisse in a mummy outfit. Her legs move like brush strokes.The real story, however, is beneath the cellar door of this information. To tell anyone anymore about the film would be to maim the movie-going experience.

Even though much of Almodóvar’s film is confined to small rooms, there is a subdued pastoralism that blooms throughout the set-design of “The Skin I Live In” that is reminiscent of the stinging white walls of sterility in “Clockwork Orange”; in fact, much of the bulbous shapes, clinical lighting, and intrusive camerawork in Almodóvar’s film are distinctly Kubrickian. Even with shades of Stanley in the subtext, “The Skin I Live In” is very much a product of the Spanish filmmaker’s gorgeously surreal style – no one has ever filmed a more beautiful scene with a vacuum. Not that many have tried. The past few years the Academy has frosted the foreign film category with innocuous nominations – save for last year’s truculent “Dogtooth”. This year, Almodóvar’s “The Skin I Live In” is a three-pronged pitchfork with enough thrust behind its jilted handle that it should defy voter conventions. This Spanish language film may have enough fleshy salaciousness to be what Bernardo Bertolucci’s “Last Tango in Paris” would have been if directed by the macabre David Cronenberg. The screenplay is a riptide of repressed male insecurities, the perverse nature of gender roles, and the misappropriation of science. Released in time for Halloween, this film is a psychological horror film in the vein of Georges Franju’s “Eyes Without a Face”. Go expecting the best foreign film of the year, and one of Almodóvar’s most amazing pictures to date.