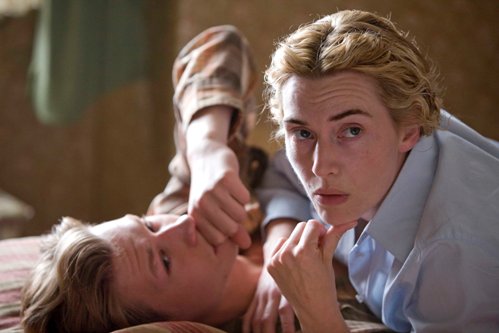 Director Stephen Daldry’s newest film, The Reader, is impressive in every sense of the word – save for the expressionless title. Stilted on voluminous scenes of eroticism, it somehow skillfully sidesteps pitfalls of mindless perversion, becoming one of the best films of the year. Strange, especially considering that the movie was destined for disaster: Both of the film’s producers – Sydney Lumet and Anthony Minghella – died before the completion of the Kate Winslet vehicle.

Bernhad Schlink’s book, adapted here by screenwriter David Hare, is a maddening glimpse into human emotions. So endlessly psychoanalytical is the source material, that the movie is often acute and devastating to watch. Somehow, despite the endless ballet of dramatics, Daldry’s direction never feels farcical or maudlin: There is a sense of authenticity in every scene.

The movie, beginning in post-war Berlin 1958, introduces us to a young German boy named Michael Berg (David Kross). Lanky and adolescent, our teenage protagonist is suffering from a severe case of scarlet fever. By creating an opening scene virtually removed of color, you sense that the movie’s characters are already steeped in a dystopia of drab grays and monochrome steels. So, when Michael is on his way home from school, it’s of no surprise that he falls sick in a soon-to-be serendipitous alleyway. There, in the stark shadows of his own sickness, he meets the middle-aged Hanna Schmitz (Kate Winslet). Coming to his assistance, and partly shrouded by the rain, Schmitz seems like a guardian angel to the wheezing boy.

From here, Michael and Hanna begin an illicit affair that lasts little over a summer’s time. Filmed as a loving ascension into manhood, the movie is weighed down with elongated sequences of nudity. The gratuitous nature of the sex scenes are sometimes distracting, but somehow, through the careful eye of Daldry, stray from being carnal schlock. In the hands of another director, The Reader could’ve been written-off as another dime store romance novel with it’s spine worn in half. Still, this doesn’t go to say that the film could’ve gone without some of the incessant onscreen procreating.

Most of the first act is built around Winslet’s chemistry with the young Kross. Because the pair spend so much intimate time together, the lack of believability would’ve killed the forward momentum of the storyline. Fortunately, both of the players look comfortable with their respective roles. Winslet, who far surpasses expectations, should be effortlessly nominated for her performance as the tortured Hanna Schmitz.

Amidst the lurid amount of sexuality, there are scenes of ill-fated romanticism. In one scene, Michael reads in Greek to a wide-eyed Hanna, while the faint luminescence of a nearby lamp washes over her ecstatic face. It’s as if the characters know, themselves, that they’re in a great tragedy. But, no matter their actions, they still cannot help but smile and embrace their fatalistic ways.

Of course, the movie isn’t all about writhing in bed, it’s also an examination of human emotions. And later, in the second half of the movie, we’re presented with a twist of epic proportions that affects the psychosis of our central characters. Hanna Schmitz, it turns out, isn’t who she seems to be.

There are so many layers to peel in The Reader, it’s a constant exercise in brilliant filmmaking. Is it a coming of age film? Is it a courtroom drama? Is it an exploration of the human mind? Is it a commentary about love? Daldry spins the bottle, pointing to all of these very different subjects with tact and honesty.

In other mentionable areas, the film’s musical composition has a good amount of steam rolling from it, as it chugs along, laying down the groundwork for the dialogue. The composer, Nico Muhly, who has had a modest resume up until this point, should be nominated for best score this year.

In the end, The Reader is a fantastic achievement worthy of Oscar consideration. And though the film has its faults – it is sometimes too forthcoming to be as lyrical or poetic as it claims to be – the overall picture is a tremendous accomplishment. Finally, a truthful film that deals with the psychosexuality of a teenage boy without involving pies or Tara Reid.