Beyonce Turned This Film Down 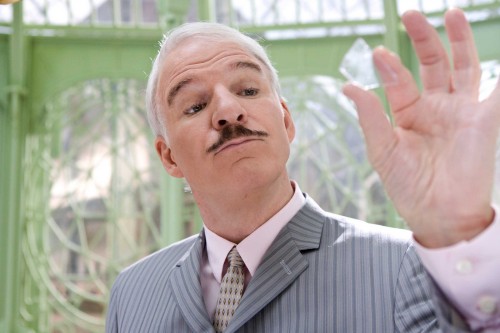 Like most films which show such contempt for their audience that they merely slap a number at the end of a title and call it a sequel, The Pink Panther 2 could have been terrible. And not just ordinary, run-of-the-mill terrible, but a colossal monument to failure of Baby Geniuses 2 proportions. Having subjected myself to the first Pink Panther starring Steve Martin, I had no reason to suspect anything more than 92-minutes of mental flagellation upon my arrival at the theater. As I braced myself to watch Martin further desecrate the memory of Peter Sellers, something curious occurred. Slowly, begrudgingly, a brief chuckle escaped. Then a stifled laugh. Eventually, this piece of Franco-Americana had me audibly laughing at the smattering of mildly clever situational humor threaded throughout this otherwise mind-numbing slapstick comedy.

Slapstick savant Steve Martin reprises the role of Inspector Clouseau, purportedly the greatest living detective despite the fact that his supervisor and adversary Chief Inspector Dreyfus (with actor John Cleese filling in for Kevin Kline) has assigned him to parking ticket detail. With Clouseau distracted by meter violations and his ingénue assistant Nicole (played by the underappreciated Emily Mortimer), a shadowy figure known as Le Tornado plots the greatest heist in history. In a series of thefts worthy of Where in the World is Carmen Sandiego, the larcenous Le Tornado steals several national treasures including, of course, the titular Pink Panther diamond of France. This leads to the development of an international crimefighting unit charged with the task of bringing Le Tornado to justice. These ethnic Superfriends include Bollywood starlet Aishwarya Rai as Sonia, author and foremost authority on Le Tornado, and Andy Garcia as master sleuth Vicenzo Corleone (although Garcia looks more Michael Corleone than Vincent Mancini by now). As this model UN of crimefighters traverse across the European continent and burn through most of the film’s budget in the process, a love quadrangle forms when Clouseau introduces Nicole to Vicenzo while Sonia inexplicably falls for Clouseau. Insert joke about the pitfalls of globalization here.

Much of the aforementioned clever humor, and I must qualify that statement by clarifying that clever is relative, arises out of these competing desires—leading Inspector Clouseau to take dating lessons from PC fascist Mrs. Berenger (played by a scene-stealing Lily Tomlin). But as Clouseau loses his beloved Nicole to Vicenzo, Le Tornado succeeds in outwitting and humiliating his would-be captor. Without the respect of the Justice League or the woman he loves, it is up to Clouseau’s intuition to solve the case and return the Pink Panther to France in order to win back Nicole’s heart. Much buffoonery ensues.

While it was a pleasant surprise to derive any sort of humor from this film when its predecessor lacked it in spades, much of the jokes still unfortunately revolve around Steve Martin speaking in a funny accent. The fact that the god-forsaken “Hamburger” shtick from the first film reared its ugly head once more borders on unforgivable. It is a shame that the writers (including Steve Martin) did not have enough confidence to allow the hilariously awkward dialogue of these colorful characters to propel the story forward and instead copped-out with a fifteen minute flamenco dance sequence and a recurring karate gag (punchline: Steve Martin falls down). In spite of this, director Harald Zwart manages to adequately weave all of the story strands together through the use of CSI-inspired flashbacks for the revelation at the end of the film. With that said, The Pink Panther 2 is a better film than the first one. Take that as you will.