The Most Important Film of the Year 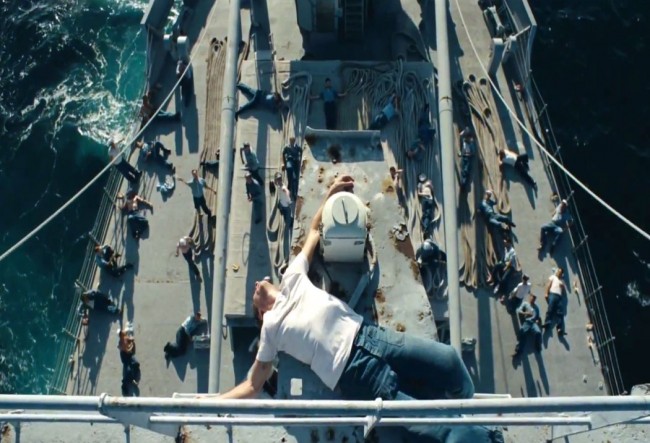 One man sheathed in a suit, counterfeiting his beliefs. One man tarring his soul with repetition compulsion and a flask full of poison. The Master is a complex, thoughtful film that explores the possibility that questions are the greatest answers. To say Freddie Quell (Joaquin Phoenix) is our protagonist is to grasp at straws. The former World War II sailor is a burning ember in suspenders, an alcoholic ambler dealing with, what we suspect, is a devil’s cocktail of post traumatic stress disorder and a family history of mental illness. Quell’s posture is like a bent wire hanger, his grin something more abstract than a Picasso. Going from job to job, after the war, Quell is about to be a scrapped hull before he meets Lancaster Dodd (Philip Seymour Hoffman), the ringleader of a neo-religion only shades away from Scientology. Dodd, lost himself, finds his world by creating one around him. By clasping his fingers and speaking with feverish conviction, he lulls an emotionally moribund Quell into his unorthodox congregation.

The Master paints a lost America built on a foundation of splintered dreams and bruised romanticism. The ocean has never looked bluer, more pristine, virgin and watercolor than it does in Anderson’s opus. And on the shore next to that beautiful, unperturbed body of water lies a humanity that scuttles and paws with panic. Anderson suggests that we are one character, one entity; the pulp of our history’s ghost. Like Picnic at Hanging Rock or The Tree of Life, nature consumes curiosity and vanquishes the illusion of meaning. The Master is about two men with different diction, feeling the same feeling of loss and confusion. Dodd is the part of us that wants to assign logic to the questionably frivolous and tangled mass that is life. Quell is the other half of us that salivates, lolls and panders to carnality and fanged impulse. These aren’t two men, but two separate parts of every person. Anderson asserts that humanity is at constant battle with itself, Dodd representing the Ego and Quell the Id. And beyond this subtext is a score, minimal and menacing, that clacks like hiccuping cloven hooves on a wooden floor. Every now and again a swell of instruments, barbed and spectral, perforate a scene as if it were a passing ghost.

Paul Thomas Anderson’s film is lyrical, cumbersome, and polarizing (few directors can make the belly of an elevator seem pastoral). And where it may seem doting, it pulses with dread and despair. Dodd calls Quell a sailor, a jangling nomad in an America full of menial possibilities. Anderson’s film is wild art, specked by our fears of the past and shadowed by a not so prescient future. The film shows America with large landscapes and flat fields, capable of endless creations, careers, but also desolate, monochrome and painted with dirt and weeds. How relative is spatial awareness? How opportune is anything, and by what means? The Master is a landmark in moviemaking that pines for conversation.