Backnapping Through the Caucasus Mountains 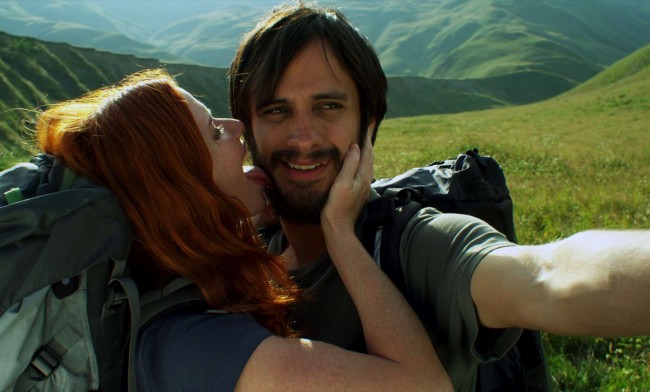 A spattering of pastoral candy, winding treks through a foreign countryside, and an affable guide that looks like a Georgian Dave Attell. The Loneliest Planet is fueled by the slow-burn of hillsides at dusk and the absence of sound. Director Julia Loktev carves out a movie that is minimalist, skeletal, meditative.

Alex (Gael Garcia Bernal) and Nica (Hani Furstenberg) are a couple wandering through the intestinal tracks of a rural Caucasus Mountains. Playfully pecking at each other, the engaged duo climb rocks, patter over streams, and, in fits of passion, rub against each other like match heads. Their guide, all the while, rubs his fuzzy mandible and occasionally, during rest stops, plays bumbling magic tricks as if he were a jester in a weathered polo shirt. The trio move, intrepidly, over large rocks that look like the hands of fossilized giants. The film moves, slowly and with burning abandon, like a mound of wood crackling on a flame. The dry, detached, panoramic-like style of filming is reminiscent of Kelly Reichardt’s Meek’s Cutoff or Gus Van Sant’s meandering, sun-bleached Gerry. Unlike the aforementioned films, however, The Loneliest Planet’s execution of the cerebral journey into the aortas of nature is studded with clumsiness. Garcia Bernal and Furstenberg have great chemistry, there is no doubt, but the film’s fuse is dampened by Lotkev’s directorial uncertainty (you can practically see eraser shavings while watching the feature). Strange, considering she practiced the same structure of existential malady in the better, more soul-wrenching Day Night Day Night.

Having an open canvas for an audience to throw their brain at is a valiant, rarely fruitful, gamble that is more polarizing than universally successful. Picnic at Hanging Rock and The Tree of Life were successful because they espoused trembling and powerful images that bruised the viewer’s subconscious. The Loneliest Planet, for being so minimal, shows almost too much of humanity and of nature to be truthful to the mysteries of either. The opaqueness of the sky and the spatial ocean of nature are the true marquees to Loktev’s ambitious, only sometimes artfully navigated, opus. The allegedly intrinsic value of love is in the belly of this film’s vise, and Loktev spins and rifles the lever at will. Even though the film is clammy and perforated by ideas that are never quite capitalized on, there is an endearing sadness that shadowboxes on the walls of the viewer’s skulls.

Loktev is an important director, whose work throttles conventionality and typical, time-honored movie pacing. The Loneliest Planet is an amiable, if not glacial, failure that beckons to be watched again. For a better, more quietly ferocious vision of Loktev’s work, one would be wise to watch Day Night Day Night. As it is now, The Loneliest Planet is like Emilio Estevez’s The Way on Quaaludes.