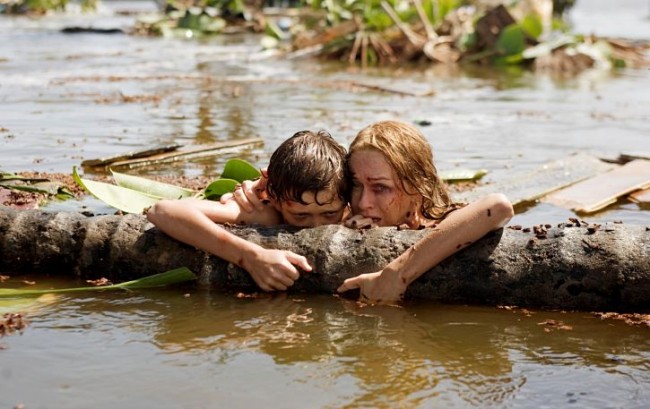 There is a scene in the 2005 film, Ellie Parker, where Naomi Watts, sitting in a vehicle, challenges her friend to see “who can cry first.” In the following moments, the camera breathes on Watts’ neck, tightly framing her wincing face, as she groans and weeps uncontrollably. Watts’ face, contorting and strained, breaks into a teary mess of wailing agony. Watts is the best crier in the business. From turning on the waterworks in Mulholland Drive to letting ropes of saliva catapult from her grimacing maw in Fair Game, the actress is like a sprinkler system with limbs. In The Impossible, Watts gets to massage her tear ducts once more as she plays a woman named Maria, whose family is quite literally ripped from her arms during the tragic 2004 Indian Ocean tsunami, during her family’s stay in Thailand.

Juan Antonio Bayona, who directed the minimalist and mind-jarring The Orphanage, is at the helm of The Impossible. Aside from the ferocious, visceral tsunami scene where cars become malleable putty in the hands of waves, the rest of Bayona’s film rests on the story of a white, upper class family wading through fallen trees and inverted street signs in the middle of one of the worst disasters in recent memory. The story focuses less on the Thai people and treats them as a microcosm in order to make the film accessible to an American audience. Much like the gushing water, other family’s stories get swept away in The Impossible’s screenplay, treating them like passing debris. This story deserves a broader look at the disaster, from all angles, not just a vacationing white upper class family.

Even with top billing, the movie isn’t about about McGregor or Watts – it’s about the two actors that play their children in the film. The sixteen-year-old Tom Holland, who plays the eldest son,  patters around hospitals and makeshift shelters in order to find his family. McGregor gives one of his best performances in recent memory, during his brief screen time, as his welted body grapples for hope. Watts does little other than murmur and weep, in what comes off as a desperate plea to the Academy. Most of the film feels absent of Bayona’s directorial fingerprints, which were so appreciated in his debut film. Here, he almost seems like a director for hire.

The Impossible fails by putting the blinders on a devastating world event. And even though the acting is good to passable, the screenplay is so porous the film buckles after its first thirty minutes into disaster tropes. What were the Thai people thinking and feeling? We are only shown white suffering – even in the hospital scenes, the American boy helps the German boy. The Impossible is Oscar bait that deserves to be passed up.