Introducing Kato And His Sidekick 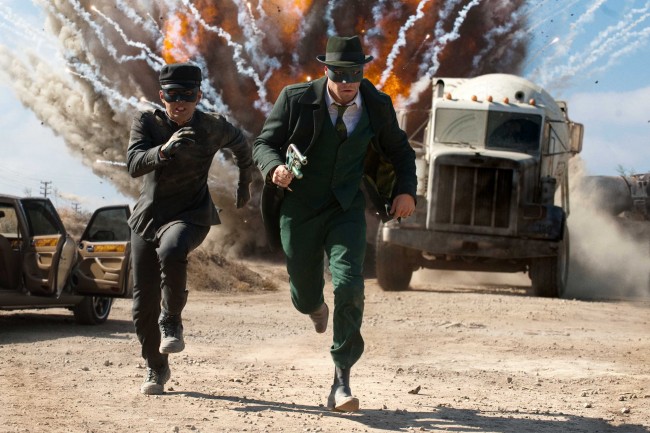 I’m going to preface this by saying that I’m not usually a Seth Rogen fan. For whatever reason his brand of comedy hasn’t done much for me. I’ll also add that, given my age, I did not listen to the Green Hornet radio show in the ‘30s and ‘40s, nor did I watch the short-lived television show in the ‘60s.

So, all of that being said, I was pleasantly surprised to find this movie is surprisingly pleasant! It got some genuine laughs out of me, and didn’t resort to a lot of the clichés I was expecting.

Britt Reid (Rogen) is the rich lay-about son of media mogul James Reid. James (the always-great Tom Wilkinson) is an overbearing father and workaholic, fond of saying things like, “Trying doesn’t matter when you always fail.” When he dies and leaves his paper, The Daily Sentinel, to Britt, Britt’s initial reaction is to get drunk and refuse all involvement with it. Instead he teams up with Kato, the family’s car mechanic, and the pair become vigilante crime fighters. Their angle? They’ll pretend to be villains so they can get close to the bad guys, and they’ll use The Daily Sentinel to drum up public interest in their antics.

Kato (Taiwanese pop singer Jay Chou), was the star of the film for me. He’s ludicrously over-competent at everything he does. Brilliant mechanic, brilliant inventor. You want a bullet-proof car with self-mending tires, ejector seats, missiles, and door guns? He’s got it. You want knock-out gas, diluted to last a specific amount of time, in an easily used handgun? He’s got that, too. He’s got magical flying dragon kung fu moves with Terminator vision. And he makes a mean cup of coffee.

The relationship between Britt and Kato is defined by its decidedly Inspector Gadget vibe. Kato is Penny, always saving the day and never getting the credit, while Britt is Inspector Gadget, bumbling his way through every fight and then proudly declaring himself the hero. If it had been played completely straight then Britt’s character would have been insufferable, an egotistical asshat that deserves a beating (and when that inevitable beating arrived I gave a little cheer). But Rogen plays the egomania for laughs, and Kato gets his comeuppance in the end, so I can let it go.

For all that I love a good dark superhero reboot full of angst and tragic character backgrounds, I enjoyed this switch to a superhero movie that doesn’t take itself too seriously. Britt and Kato’s last minute panic when they realize that vigilante crime-fighting might be more dangerous than they thought is endearingly realistic. Just throwing on a costume doesn’t make you an invincible fighting machine.

The supporting cast does their part. Christoph Waltz is the primary villain, Chudnofsky, a gangster who has gone a little loony and wants to develop a gimmick like the Green Hornet so that people find him scarier. Cameron Diaz is the female love interest who, refreshingly, does not fall for the lead. And James Franco has a funny cameo as ill-fated drug dealer Danny Clear.

Kato’s fight scenes actually benefited from the 3D format—another pleasant surprise. I’ve been to some 3D movies that made my eyes bug out of my head, but this wasn’t one of them. If you’re debating whether to fork out the extra money for 3D, however, I’d say to save it. Two or three scenes doesn’t make that much of a difference and the fights will still be entertaining in good old fashioned 2D.

All in all it is an inoffensive movie, characterized by cartoon violence and fumbling good intentions. The climax of the film is one of wanton destruction and bucket-loads of broken glass, a must-have for any action movie fan. There’s a mild public service moral about the importance of responsible news reporting, but other than that no big message on the line. It isn’t something that I’d watch over and over, or quote endlessly with friends, but if you’re seeking out a fluffy bit of entertainment for a Friday night date it’ll do the trick. I’d rate it a 4 except that, a couple of days after watching it my impressions are already beginning to fade, and I have a feeling that soon enough it’ll melt into my backlog of unmemorable films. You know, the long list of, “Oh yeah, I saw that movie… it wasn’t bad.” So, 3.5 will do for me.