Home » Film » The Girl With the Dragon Tattoo

The Girl With the Dragon Tattoo

Not Angelina Jolie in ‘Hackers 2’ 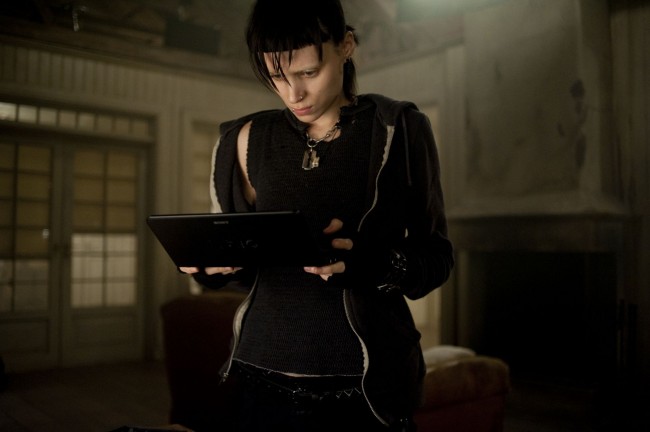 Stieg Larsson’s Millennium Series, a trilogy of books about the androgynous computer hacker and razor-tongued counterculture herionne Lisbeth Salander, began with the Swedish author’s first installment of the franchise, dubbed “The Men Who Hate Women.” That book, which sounds like Woodrow Wilson’s presidential slant against women’s suffrage in 1916, was, only two years ago, made into the foreign language adaptation of the Larsson’s novel, appropriate titled “The Girl With the Dragon Tattoo” – that title sounding like hashtags for the Suicide Girls website.

Because Americans are typically aghast when presented with the option of reading subtitles (people barely read the small print when purchasing cars) they craved an English language remake. Behold the grim, unrelenting bastion of darkness and emotional vacuity in Mr. David Fincher. The director decided, as a pet project, to remold Larsson’s story into a more perverse, clammy, unbridled foray into the arms of evil. Of course, in the process, you get to hear American and English actors cobble their best European accents together in order to have Swedish sounding enunciation. Sadly, Stellan Skarsgard*, who is in the remake, is actually a native of Sweden, but he is forced to speak in English. This a necessary evil so that the android-like Daniel Craig can deliver his lines in his native tongue of boredom.

The slight, hardbarked Noomi Rapace donned the face jewelry in the Swedish adaptation of the series. Here, in Fincher’s barbed vision, he has the nimble, fair-skinned Rooney Mara take over as the gadget guru and digital wizard, Liz Salander. Mara brings a subdued sensitivity and fluttering uncertainty to the half-cocked hacker, bringing the mercurial Salander an extra layer of emotional viscera, that ultimately makes Fincher’s vision a more cohesive character study than was seen in the original Swedish version. Rapace’s version was bolt-tight, unflinching, and muscle contricting. There’s no doubt about it. But Mara’s version of Salander is one of frailty and, conversely, premeditated wickedness. The dichotomy is dangerously palpable.

The original versions of films I typically champion because of their honesty, timeliness, and belief in what they’re doing is right. Sequels usually dilute the aforementioned strengths and turn the source material into a boxed cake mix with the artistic merits of a Happy Meal toy. Strangely, in the Swedish version of The Girl with the Dragon Tattoo, the director, Niels Arden Oplev, often times looked like he was on auto-pilot; the camera moved in a tepid fashion, the shots were poorly framed, and the story showed all of its engine problems because the hood was open for everyone to see. The Fincher version covers some of the film’s clunky subplots and moribund pacing problems with flashy camerawork and technical expertise. The action is better framed, processed, applied, making the original story more palatable and reinforced around the hull. In fact, this year’s version of the film may be one of the better directed movies of the year. Fincher knows how to bring the malaise of these venomous characters to life; you not only believe their evil, but you feel the weight of their shadows. Not to say that Fincher sometimes doesn’t go overboard (check out the bombastic James Bond title sequence that looks like it was inspired by The Chemical Brothers’ album covers.)

Trent Reznor and Atticus Ross’ latest score, on the heels of their feverishly kinetic musical chemistry during The Social Network, was hotly anticipated for The Girl With the Dragon Tattoo. The results are bruised, blip-driven, and morose sounding as you would expect. This time instead of the music accompanying movement and action, as it did in Fincher’s last film, the score sometimes tramples dialogue. Other times it takes a backseat in the film and is barely heard. There is too much inconsistency with the composition and the way the composition was used to be any more than a nominally interesting source of inspiration during the film.

If you’re interested in the Millenium series, your best bet, if you’re not averse to prolonged torture sequences and long takes of Daniel Craig’s face, is to go with the Fincher remake. There are some drawbacks to this particular picture, but they are, due to their debatable importance, pretty negligible (Mara’s skin art looks as believable as a Barq’s root beer tattoo. Daniel Craig acts like a mannequin with a five o’clock shadow). Fincher’s vision doesn’t suffer from the inertia the first film had. At times there was a need to hook up jumper cables to the screen. Here, in the American remake, there is a technically superior film to be had (it’s hard to believe, but it’s true). Finally, an enigmatic fog surrounds characters that have never had one before.

*Author’s Footnote: Stellan Skarsgard is beginning to look like Death from Ingmar Bergman’s The Seventh Seal.