Matt Damon Is Not In This Film 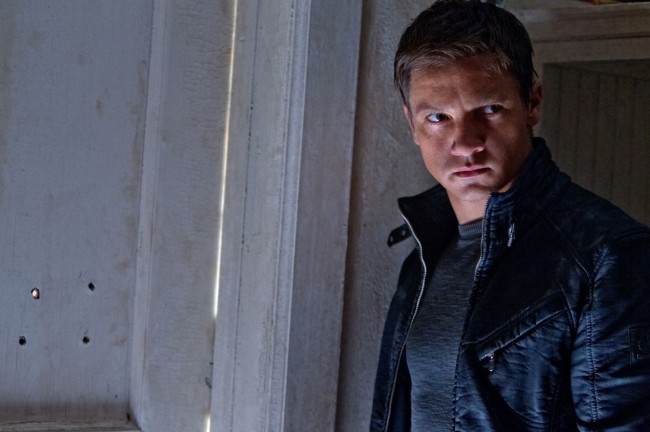 With all the bait-and-switch bravado of a carnival barker, The Bourne Legacy writer-director Tony Gilroy does his damnedest to project wayward star Matt Damon’s titular hero onto the blank canvas of Jeremy Renner. And much like a carnival sideshow, the resulting experience ends in disappointment.

The film opens with a retread of the Waterloo Station assassination from the previous film, The Bourne Ultimatum, and then intercuts Aaron Cross (Renner) in the Alaskan wilderness with DEFCON-5 level discussions of Jason Bourne. The “discuss Jason Bourne, show Aaron Cross” sleight-of-hand attempts to establish a pedigree for the new action hero while simultaneously failing to develop his character for most of the film’s first act. Instead, the audience is treated to Metal Gear Solid-inspired feats of badassery involving mountain climbing and wolf slaying as Cross makes his way to a remote checkpoint to re-up his medication. Unlike Jason Bourne, who developed his combat skills and tactical acumen through intense training, Cross is given audience-friendly color-coded pills that reprogram his genetics to boost his fighting capabilities. And there’s the rub: while the Bourne franchise succeeded by shoehorning action movie conventions into a plausible framework, The Bourne Legacy neutralizes the most appealing aspect of the series by introducing Captain America’s Super Soldier Serum as a plot device. Expect future sequels to boast soldiers exposed to gamma radiation and adamantium skeletons.

After the press catches wind of Jason Bourne’s black ops, Aaron Cross’ commanding officer Eric Byer (Edward Norton) discovers a cryptic YouTube video that links Bourne to Byer’s Project Outcome. Byer can’t afford to let the press discover his GMO G.I. Joe program and, instead, decides to issue Order 66 and have all Project Outcome operatives terminated with extreme prejudice. Cross narrowly escapes a predator drone airstrike to his checkpoint station and, after discovering all the meds have been destroyed, somehow commandeers a Cessna in the Alaskan tundra and flies to the home of the doctor who conducted the Super Soldier experiments on him. Cross convinces that doctor, the comely Marta Shearing (Rachel Weisz), that the people looking to kill him will come after her as well and the only chance for survival is if he keeps taking the blue pills that boost his intelligence. This leads Cross and Shearing on a globetrotting cat-and-mouse game to secure blue pills before Cross’ impending stupidity gets them killed.

Jeremy Renner, whose franchise-poaching turns in everything from Mission Impossible to The Avengers is quickly establishing himself as the Ted McGinley of action movies, has the unenviable task of shaping a character with no backstory, no charisma, and no goal beyond scoring his next fix. Despite these handicaps, Renner powers the film on pure earnestness. Meanwhile, the film mangles Rachel Weisz’ Dr. Shearing. Ostensibly the hero’s love interest (although it’s never made clear), Dr. Shearing’s involvement in Project Outcome undermines the naiveté that Weisz brings to the role.

Despite a few noteworthy action sequences, including a brilliantly-staged attack in a lab, the film doesn’t introduce Project Outcome’s lead assassin until the final 20-minutes of the film and never feels the need to resolve Edward Norton’s story thread with Renner’s. When Norton announces that Renner’s character is “about to run out of brain,” he could just as easily be talking about the film itself.