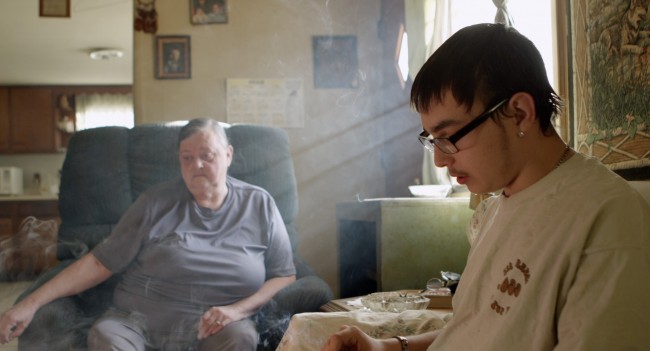 A coral reef of dirty dishes. Later, a flippant exchange between siblings. The drum roll delivery of an auctioneer bruising the night sky. A parent, sheathed in a comforter, siphons soda out of a Doctor Pepper cup while cavalierly telling the cameraman that her thirteen-year-old son is old enough to make his own decisions. Shouts. Screams. Ire and bellyaching. Rich Hill, filmed in the rural community of the same name, is under a smudged microscope of emotional dissension.

Directors Tracy Droz Tragos and Andrew Droz Palermo focus on three families in the Missouri township. The surroundings of Rich Hill are half-mast and dour, for the most part, with only creaky smiles here and there to perforate the indecisive paralysis of these kids and their documented life. There’s a definitive subterranean gloom that hangs like weeping willow trees over each shot. Imagine a Norman Rockwell painting if everyone wore a logo t-shirt. Grimy images of flaccid piles of laundry and furniture-dotted yards may remind you of a Harmony Korine movie if staged by Werner Herzog.

With all of the textual arrows, it’s hard to watch Rich Hill without wondering about the exploitation of these families for the sole purpose of wringing out emotions from an audience removed of the situation. The narrative, led by an orchestra of melancholy instruments, feels more like a funeral procession than an unbiased snapshot of a town’s youth. You get the sense that the filmmakers want you to overtly pity the conditions of the subjects instead of exploring them. Rich Hill is a weird waltz of film making that comes across as more of a TLC reality show than a focused documentary.

Hank Williams’ syrupy intonation lacquers the film, the community. More mood and measurement. At an hour thirty, the repetition of daily life sets in: perhaps you’re supposed to feel the doldrums. More thwacking of shoes as kids run. More shots of disconnected mothers and fathers. Rich Hill is an essay without an editor. “I was thinking about moving to China and becoming an art teacher,” one child says, “you’d get to sit there and draw dragons all day.” Meanwhile, the plunking of piano keys sorrowfully reverberate, as if the kid in question has no chance of approaching his dreams. These directors are twisting the knife before a blade even appears.