A Lesson in Violence 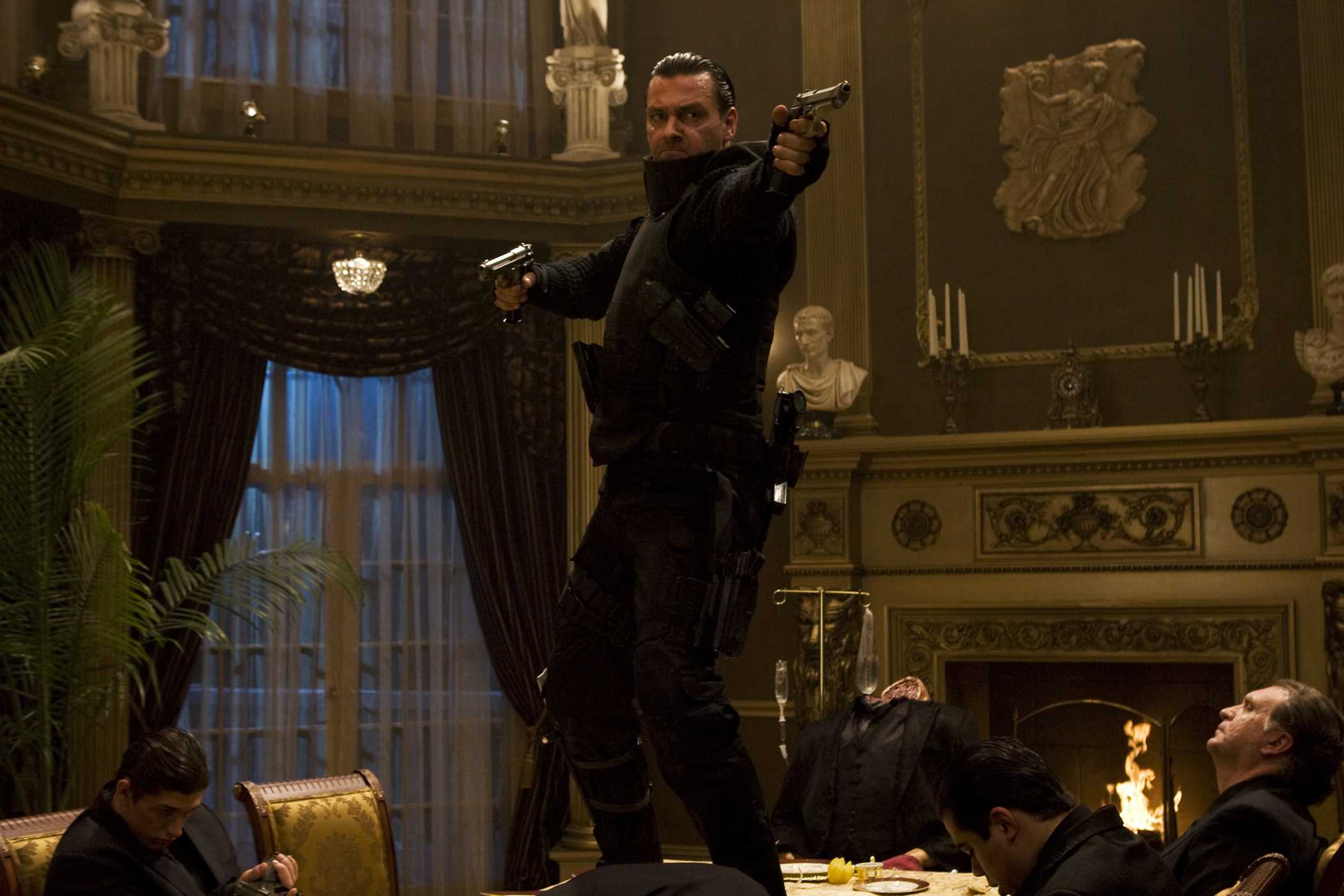 In 2004, Marvel Studios said that the follow up to that year’s Punisher starring Thomas Jane would be the fifth Marvel property to become a sequel.Instead, Punisher: War Zone became the latest franchise reboot in the field of comic book adaptations, a trend that started with 2005’s Batman Begins.While these reboots aren’t always bad (2008’s The Incredible Hulk beat out 2003’s Hulk by far), the pantheon of comic-book pictures is overloaded with tired origin pictures, which could be why the filmmakers decided to place the story of War Zone far from the point in which Frank Castle became The Punisher.

The story begins with Frank Castle (Ray Stevenson) destroying the last of the high-ranking criminals in his city. In the process, he inadvertantly creates the worst criminal of them all: Jigsaw (Dominic West). After that, Castle evades the law with help from none other than the law, tries to help a widowed family, shoots at some acrobatic gangsters, and sulks around his subterranean lair.

I’ll begin with the film’s good qualities, because there’s so few of them. No one can deny the quality of the film’s sets. The entire film drips atmosphere and each scene has a very distinctive sense of place. Ranging from the neon-lit city streets to Castle’s damp hideout, the director takes full use of his creative team and fully immerses the audience in the imagery.

Another thing the film has working for it is the heavy metal laden soundtrack. While it’s not fantastic in quality, the music supports the action in every scene in which it’s used. Never is the music prematurely queued or improperly matched with the content of the scene. In short, the music is able to pump up the audience when it needs to be rushed, and slow them down when it’s time to listen.

Now, onto everything the film has against it.

Let’s begin with the story.The film plays out like a typical crime yarn, complete with tired lines such as “Don’t die on me!” and “I promise, we’re gonna get this guy!” Add in some wildly unlikely theatrical elements, such as an “urban free-flow gang” that consists of three acrobatic martial artists and a part-time cannibal and you’ve got Punisher: War Zone.

The story constantly presses the boundaries of believability, which isn’t a problem in a movie based on comic books, but this unbelievably contrasts violently with the dark, serious overtone the film tries to maintain at the same time. In addition, the film was sprinkled with jokes that range from silly to incredibly cheesy. In one scene, Frank Castle blows up a parcour artist with a rocket launcher. In another scene, one of the film’s villains actually says “let my axe you a question” as he dismantles a hero with a hand axe. I know, the cleverness is too much to bear.

The story would have been easier to take, perhaps, if the actors were able to handle the material. It seems everyone in the picture either took it too seriously or didn’t take it seriously enough. Doug Hutchison, who plays the aforementioned part-time cannibal, gives his character one lasting trait: he stretches out every word he speaks in the entire film. I imagine he’s trying to build suspense, but only achieves in making us want to punch him in the teeth when he opens his mouth. In other times, the performances ooze with melodrama (“Billy is dead… from now on, you’ll call me… Jigsaw!”).

Quite the opposite, Dominic West can’t seem to decide if he wants his character to be smooth talking and calm or overzealous and spastic. One would certainty look either way, but not both. Early on, after seeing the first trailer for this picture, I predicted the filmmakers would be drawing heavily from The Joker of “The Dark Knight” because, let’s face it, Heath Ledger has set the standard for comic-movie villain. However, it wasn’t Ledger’s Joker the film team plagiarizes, it’s Jack Nicholson’s.

Similar to Nicholson’s portrayal of the Joker, West’s Jigsaw bounces from wild to sedate, he partakes in over-the-top theatrics (in one scene, he recruits street thugs into his army of criminals as he marches in front of a waving American flag). Even his creation is reminiscent of that of the Joker’s: Frank Castle launches Jigsaw into a vat of broken glass in the belly of a shady recycling plant.

Years of comic book adaptations have shown film viewers one thing: we can’t possibly expect much from them. Despite everything this picture has working against it, the film has great pacing, rarely slowing down, and the action scenes are immaculate, even though it’s over-emphasized in the violence and bloodshed. I’m within confidence that anyone who enjoys action films or comic books will enjoy this picture. However, for the rest of the population, I’d recommend choosing your selection carefully.