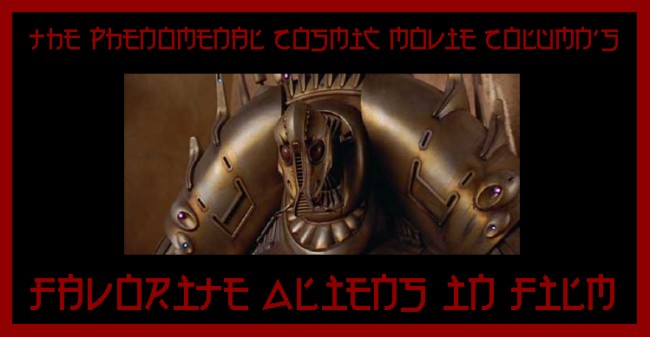 Guys, I have a confession to make. I am really excited about the upcoming “Cowboys and Aliens.” Daniel Craig, Harrison Ford, Sam Rockwell? Um, cowboys fighting aliens?

I’m a little nervous though, because often when Hollywood raises my expectations with a fun concept they are planning some prank to dash it all away again. The cowboy half of the promise will undoubtedly be paid in full. But what about the alien half? I haven’t seen much besides saucers.

Rather than dwell on an uncertain future I am going to revel in a comfortable past. Nostalgia! What problem can’t you solve? Over what comparison can’t you triumph? Because things were better in the past! They don’t make things like they used to! CGI is cheating!

Without further ado, here are some of my favorite movie aliens, and why. Two of these movies feature Kurt Russell. That is the mark of a great list.

Let’s start off strong. You can keep your Klingons and Romulans and glowing blobs of pure sentience. Give me Mr. Spock! Not to be confused with Dr. Spock, of course, unless there was a lost baby-raising episode I was unaware of.

Half-Vulcan and half-human, Spock always struggled between the extremes of logic and emotion. In the original series this inspired a number of cheesy episodes (oh I don’t care, the whole thing was cheesy and I LOVE it), while in the movies they achieved a somewhat subtler plot arc concerning Spock’s death and resurrection, and his reconnection with his human friends.

Another eye-rollingly human-looking alien, but this one is a villain, and in my opinion the most entertaining thing to shoot out of Krypton since Marlon Brando’s reflection. Superman himself is too much of a boy scout for me, and plagued by easy powers (read: lack of compelling conflict). Team Batman here, hello!

Zod gives us an extremely important psychological contrast to Superman, and without him I think the Superman mythos would suffer. Superman’s excessive devotion to public service is meaningless unless we see the dark side—the potential corruptive effects of near-absolute power.

Zod was a criminal to start with. Kal-El was a blank slate of a baby (nature versus nurture can suck it). Without Zod’s example of “power in the wrong hands,” it is too easy to assume Superman’s benevolence. Raised in a different household, what might Superman have become?

And on top of that, let’s face it, Zod just plain kicks ass. KNEEL!

I love these guys, and their adorable hulking waddle was what elevated them above the opera singer Plavalaguna as my favorite alien from “The Fifth Element.” I like things that waddle.

The Mondoshawans are an ancient race who guard an ultimate weapon against evil, deployed every 5,000 years. They are tall and wide, and covered in a bronze-colored exoskeleton that may be armor or may be their actual bodies. They have a single, dedicated goal: protect the components of the ultimate weapon, and make sure that it is used every time the Great Evil approaches.

The fast-paced nature of the film did not lend itself to studied reflection on the history of ancient races. And as far as the film goes, that is fine. It is one of my favorite movies and should remain as is. But it certainly leaves the Mondoshawans shrouded in mystery, and I wonder about their backstory. How did they develop this cyclical relationship with the Great Evil? How did they become the sole defense of the universe? What do they do the rest of the time, you know, the 5,000 year span between each battle?

A military team, aided by allergy-riddled Egyptologist Daniel Jackson, parse the secrets of an alien transportation device, the Stargate, and travel through it to another world. There they find an entire population of human slaves serving an alien masquerading as the Egyptian god Ra.

The alien (retconned in the TV series “Stargate SG-1” to be a parasitic Goa’uld) came to Earth 10,000 years prior to the present day in a dying body. He discovered human bodies were easy to repair with his technology, and possessed the body of a young boy. He then set up an empire, taking his human slaves to various other planets to serve him in a mock-up of a mythological hierarchy.

Ra is an ancient, malevolent being in an androgynous young body. This makes him disturbingly attractive. He also has a great alien “voice,” and I love listening to his Egyptian dialect filtered through a synthesizer. It is deep and rumbling and perfect.

He is also an interesting take on how to conquer a human population by assimilating into its belief structure. Ra did not arrive with an army and conquer through violence. He built his godly persona according to local religious beliefs. Ra plays a role for the people he commands, and he has adapted to this role so thoroughly that we see virtually nothing of his original culture aside from some of its technology.

THE THING – The Thing

Here we have another parasitic creature that mimics a host body, only the unnamed “thing” is significantly more violent and horrifying than Ra.

The setting is perfect for psychological horror: an isolated research station in Antarctica. An alien creature, buried in ice for thousands of years, is unearthed by a Norwegian team who subsequently dies trying to destroy it. Their doomed chase ends at an American station, where our protagonists unwittingly bring the creature inside (disguised as a sled dog).

This alien is an adaptive and highly dangerous creature. It assimilates and then perfectly imitates the life-forms it encounters, making it extremely difficult to detect. And its transformations are truly glorious for disgusting monster magic fans like myself.

The station’s descent into paranoia (the alien could be any one of them) greatly encapsulates the human fear of the unknown. Aliens like Zod and Ra are intensely human in their motivations for power. The Thing is much more animalistic. It does not state a desire. It cannot be bargained with. It is a brutal killing machine, hell-bent on survival and destroys anything or anyone in its path.

Of course, how could I mention a brutal killing machine without mentioning the most deadly of them all, the titular alien of “Alien?” In particular I was always a great fan of the Queen xenomorph from “Aliens.” There’s just something about that enormous head crest and her insectile ability to produce a field of deadly eggs.

Sorry, “Predator” fans, while I too enjoy the battle of Schwarzenegger versus dreadlocks, xenomorphs win the deadly alien category hands down. HANDS DOWN!

Where the facehuggers are perpetrators of interspecies rape horror (an extraordinarily discomforting facet of alien invasion intentionally stressed by writers Shusett and O’Bannon), James Cameron’s Queen has a more traditional motivation: she is a mama protecting her babies.

Of course, she is no match for Ellen Ripley (more accurately, she is no match for Sigourney Weaver!), and Ripley’s rescue of the little girl Newt is a perfect parallel to the Queen’s efforts. For both species, survival boils down to the preservation of its children. The xenomorph is a marvel of evolution, perfectly hostile and self-serving. But humanity is proved capable of equal brutality in its own defense. Ripley is more than capable of genocide and the flame-thrower destruction of newborns to protect her own people.

Ridley Scott revealed earlier this year that he is working on a couple of prequels, set at least 30 years before the events in “Alien” and concerning the history of the mysterious Space Jockey. My fingers are crossed. Please, please, please be good! 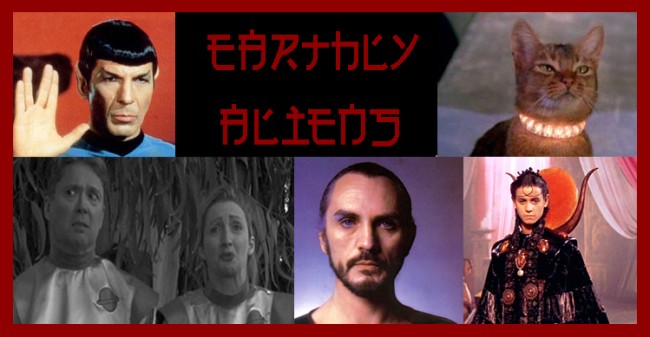 Kuato from “Total Recall”— Technically he is a mutant, but he lives on Mars so technically he is also a Martian! Kuato the disgusting fetus-man coming out of a dude’s torso will always haunt my dreams, and the whispered phrase, “Open your mind” will never get old.

Jabba the Hutt from “Star Wars”— Don’t scold me for snubbing the Star Wars franchise. This is my list of favorites and I expect some disagreement. That being said, Jabba’s fat-guy laughter will always bring a smile to my face.

Jake the cat from “The Cat From Outer Space”— Also known as Zunar-J5/9-Doric-47, this charming Abyssinian from space needs some Org-12 (a.k.a. gold) to get his spacecraft back to the mothership. He has a collar by which he can communicate with humans. He also has levitation powers! Ahhh, classic Disney.

Jeriba Shigan the Drac from “Enemy Mine”— I don’t care about this movie’s mediocre reviews, I always loved it. Asexual reproduction! Alien childbirth! Dennis Quaid teaching a lizard-boy how to play football! Louis Gossett Jr. as Jeriba tugged my heartstrings. Tugged them, I say!

And finally, the funniest movie aliens of all time…

Lattis and Krobar from “The Lost Skeleton of Cadavra”— “Aliens? Us? Is this one of your Earth jokes?” 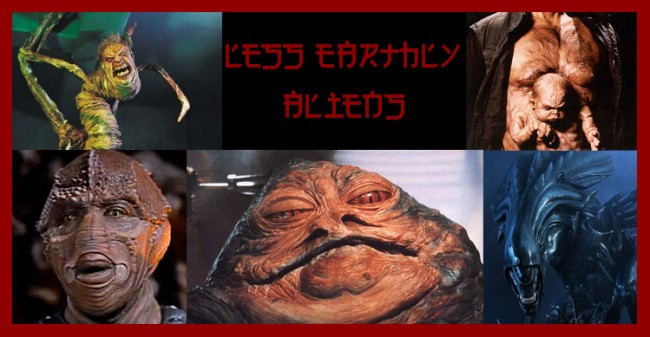