Revolution at 24 Frames a Second 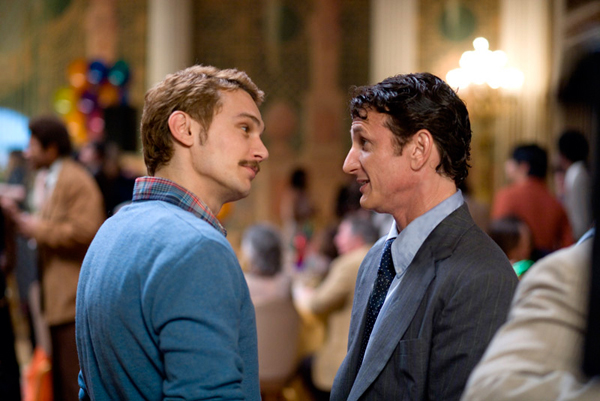 Gus Van Sant opens his newest film with Harvey Milk, a gay rights icon, making what seems like an expositive eulogy on an old tape recorder. The device hisses, as if to snake charm Milk into telling his story. “If a bullet should enter my brain, let the bullet destroy every closet door.” Milk demands into the microphone.

Here, in a very atypical Van Sant narrative, he relieves himself of his trademark hallucinatory prose that has inhabited much of his work in the last decade. The cast and crew of Milk, each providing their own repositories of conviction over the importance of this film, have created a sort of filmic epitaph to the life of this charismatic man. Sad as it is, Milk’s tumultuous existence ended with a muted pop in a back room office – far away from the crowds, the legions of voters, and his beloved friends. And though Harvey Milk’s life expired with a faint plume of smoke, his legacy was somewhat of a cacophonous explosion.

Milk, whose life was taken so violently in late 1978, was a cultural hero in the gay rights movement in San Francisco. Today, with murals sprawling over walls of the famed Castro street where he first launched a movement, Milk is remembered as both a political pioneer and an inspiration to millions across the world.

Sean Penn, who plays Milk, channels the late politician’s unflappable personality in a performance that will undoubtedly earn him a well deserved Oscar nod. Even Josh Brolin, in his portrayal as the pugilistic San Francisco Supervisor Dan White, reveals flashes of genius. The acting, in fact, is so contagious throughout Van Sant’s biopic that each supporting character actor – including that of Emile Hirsch and James Franco – are simply enveloped within their respective roles.

Van Sant, in a bid to show us much of Harvey’s personality, grants us access to many of Milk’s most intimate moments, serendipitous meetings, and political beliefs during the film’s running time. We are shown that, even though he meliorated many gay rights issues at the time, Milk was a man with maladies that he never quite rectified himself. The fact that he ran his campaign committee with people that had nearly no prior experience in politics – even recruiting the nearest person within his proximity for the most difficult of tasks – shows his propensity for trust within his community. The idea of young adults wearing coke bottle eyeglasses and screen printed t-shirts, yet still being more effective than the archetype of politically conservative board members, shows the type of attitude that Milk – and more importantly, the residents of Castro – had at the time.

A master of visuals, Van Sant reenergizes the imagery of a 1970s San Francisco on the brink of madness and change. When Milk cranks his arm back and releases it to the air, crowds burst into celebration and attentiveness. When religious factions attempt to revoke the rights of gay citizens, an entire city stands its ground. There is so much passion in each inspired frame of this movie, dating back from the first scene on, that it’s hard not to feel completely lost in its liquid movement.

Milk, always aware of the dangers in his position, knew that even if his life was at risk, his world of accomplishments was not. For a great lover of opera, it’s only appropriate that Milk found his own voice through tragedy – the stage, after all, had never been better suited to carry out the tenor of his hope and ideals.