Historical Poverty All Up In Your Grill 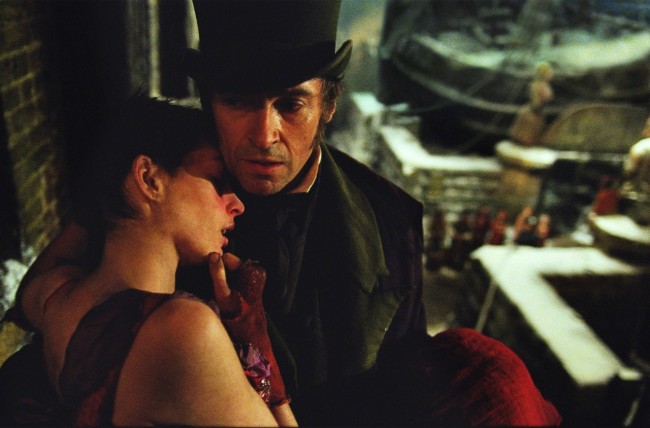 In the opening sequence of director Tom Hooper’s adaptation of the musical Les Miserables, the French Tricolour–whose faded bars of blue, white, and red, symbolize the idealism of the French Revolution–is trampled by shackled prisoners marching in unison. With the restoration of the French monarchy described in the opening intertitle, the spirit of liberty, equality, and fraternity inextricably bound to the colors of the flag are tattered and soiled almost to the point of grayscale. The relentlessly bleak, gray world in Les Miserables becomes an extension of this ruined flag and the failures of the Revolution as prisoner Jean Valjean (Hugh Jackman) laments his incarceration.

After serving 19 years in prison for stealing bread to feed his starving family, Jean Valjean is granted parole by the dogmatic Inspector Javert (Russell Crowe) who assures him that his life will always be miserable as long as his papers declare him a dangerous man. Actor Colm Wilkinson, who played Jean Valjean in the original West End production of Les Miserables, has a clever cameo as the Bishop of Digne who provides food and shelter for the starving Jean Valjean. When the Bishop gives him his silver in order to become an honest man, Jean Valjean tears up his parole papers and assumes a new name–foreshadowing many of the questions involving identity while living in abject poverty.

With the Bishop’s silver, Jean Valjean opens a factory where the unmarried mother Fontine (Anne Hathaway) works to support her daughter. In the most heartbreaking sequence in Les Miserables, the other factory workers get Fontine fired over her illegitimate child which causes her descent into prostitution. Shot in a single take, close-up like Sinead O’Connor’s “Nothing Compares 2 U” video, Hathaway’s quivering, tearful rendition of “I Dreamed a Dream” steals the entire film. When Jean Valjean finds Fontine on the street, he vows to make her daughter his ward.

Helena Bonham Carter and Sacha Baron Cohen essentially reprise their roles from Sweeney Todd (including a shot of a disgusting meat grinder) as the corrupt caretakers of Fontine’s young daughter Cosette (Isabelle Allen). After Carter and Cohen’s comic relief musical number, Jean Valjean takes Cosette away and subsequently gives him a reason to live and fight in the revolution.

Despite Russell Crowe’s creaky, butt-rock vocal stylings requiring an acclimation period and Amanda Seyfried’s vibrato-laden bird voice, the cast of Les Miserables sings remarkably well–a feat even more impressive given the fact that all singing was performed live rather than dubbed. The live singing allowed Hooper to film lengthy single takes of the actors which enhances the power of their performances. Additionally, Hooper’s handheld, unbalanced compositions and frequent use of dutch tilts provides a level of discomfort and uneasiness for the viewer that can’t be replicated on stage–projecting the instability of French society at that time. However, unlike the stage production which allows an intermission for the audience to recalibrate expectations for the second half of the musical, the film suffers from jarring transitions between acts and, at times, languid pacing during its 158-minute runtime. Yet, these pacing problems stem from Hooper’s loyalty to the source material rather than any fault with the film.