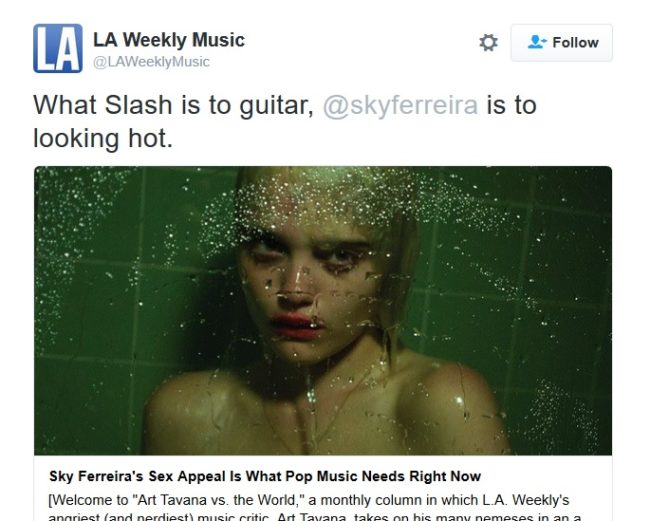 How can I citizen’s arrest this guy?

In a world where unity, comfort, and equality has become submerged like Atlantis over the course of an insidiously violent month, this is the time where people, publications, and our greatest resource for decompression, music, should be a positive outlet for our collective pain. Nay. At least not at LA Weekly, where the alternative put on some decidedly reptilian skin a few hours ago. Their “writer” – a glamorous term for someone whose sundial for progressive thought lies in the sewer system of an Eli Roth film – decides to fetishize a pop star by comparing her to an Italian sports car before mentioning her “breasts” and “cup size” as if they were spoilers at a car dealership. The author in question, Art Tavana, sounds like he may have forgotten that Sky Ferreira, the musician mentioned in his salacious article, is sentient.

In his second paragraph, Tavana luridly describes Ferreira’s body with descriptors that a tobacco chewing baseball scout might use to size up a college slugger. “Square jaw, strong eyebrows, lulled green eyes,” he writes with the pen pressure of a psychopath. He ends his disgusting and proud report with “and killer tits” – to let you know he has coolly dominated his subject with machismo.

This is a real opinion piece. Published in LA Weekly. In the year 2016.

Later in the rambling, wordy, and sleazy piece he asserts that Ferreira is “…icy but also sweet, like a freshly licked lollipop.” Does this dude know that he’s not in chat roulette? Did he brainstorm his entire article from inside one of the rings of hell in Dante’s Inferno?

In Art Tavana’s bio, he glibly describes himself as “an angry nerd” and an “inflammatory” writer in order, one assumes, to buffer his sexism and stupidly. But that’s a shield made of plywood. You cant use self-issued snark to label yourself as a court jester when your real purpose is to manifest destiny your sexuality onto other people. This type of writing is the worst kind of violence because it encourages likeminded individuals to prey, socially and physically, on women when the predator sees fit. Shitty humor and self-effacing titles don’t hide the fact that you are, at your core, a dangerous person.

Tavana, Ferreira is a wonderful artist and master of her own expression, and not a rudder to move your gross agenda. And to LA Weekly, it may be time to move your editor. I will not link Tavana’s article in this commentary, but I will link you to Ferreira’s wonderful album, Night Time My Time.