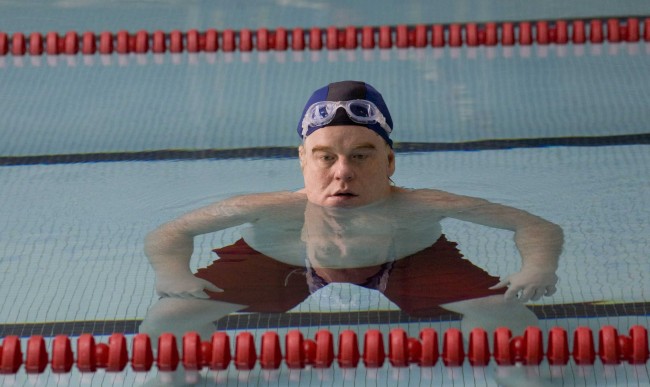 Philip Seymour Hoffman chose Bob Glaudini’s “Jack Goes Boating” as the bottle to christen his directorial debut. Glaudini’s play, first written in 2007, is about Jack, a socially inept New Yorker, whose primary goal is to woo his dinner date. The character of Jack is essentially a man-child, whose only friends are a well-meaning, but emotionally malcontent couple, played by John Ortiz and Daphne Rubin-Vega. Because his two friends are a hotbed of instability and vehemency, they are the polar opposite of Jack’s idiosyncratic and meek sensibilities. Jack mumbles, hiccups with uncertainty, and toddles about clearing his throat when nervous – which is all of the time. Because he is socially crippled, he becomes instantly enamoured with Connie, a woman who shares Jack’s coy introversion and fluttering facial tics. The film is like a perverse “Marty”, only that Jack and Connie’s souls are much more weathered and frayed than the characters in the aforementioned Ernest Borgnine vehicle.

The amount of sheer emotional violence, splayed throughout the film, is almost akin to a watered down Todd Solondz. Characters engage in blue dialogue, sigh when engaging in terse and sickening interactions, and make uncomfortable expositions about rueful sexual exploration. The conversations in this film sound contrived and plastic. Are humans awkward creatures? Absolutely, they are. But is every sentence, launched from every tongue, siphoned of good taste and adequate response? Not quite. The dialogue in “Jack Goes Boating” is concentrated awkwardness, written purposely for dry comedic value or ostensible quirkiness. You know there is a problem when you constantly, throughout every conversational exchange, remember you are watching a film. You cant be drawn into a movie when the writer of the picture is more evident than the actual film itself. Glaudini might as well use the projector’s light to make shadow puppets his presence is so omnipotent.

Hoffman’s performances are always good, and here, in “Jack Goes Boating”, we’re given another good showing of his talent. The actor is great at channeling characters that have a propensity for watery-gazes, pliable confidence, and puttering tongues. And for it being the thespian’s first go at directing, the movie contains a lot of imaginative flourishes that march over the screen. The problem is that the film feels like it wouldn’t want to spend time with itself let alone an entire audience of people. The whole thing, complete with daft arguments and episodic fights, would best be left for daytime soaps. I doubt there is an audience for “Jack Goes Boating”, unless people are confused and think it is a sequal to “Love, Liza”.

The soundtrack is flushed out with the airy-clapping of Fleet Foxes and the throaty-howls of Cat Power. Both of these artists lend their music to some of the film’s better scenes, though, as I’ve explained before, it doesn’t last very long. Grizzly Bear, an indi-band from Brooklyn, composed the “score” to this mean-spirited little film. The alleged score is the loose pattering of piano keys, met with some hollow reverberation, as the composition seems little more than a nondescript background noise that wafts in and out of scenes with no particular relevancy. Not to say the band isn’t talented or innovative, they only lack the ability that Broken Social Scene or Yo La Tenga have when conducting film scores.

Aside from a few kinetic camera shots and some breezy folk music, there is little worth in Hoffman’s thorny opus about emotionally impotent people in modern New York. Not even chlorine can kill the bacteria in this cesspool.