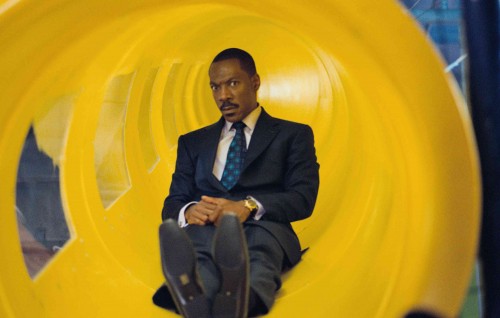 Although being Nickelodeon’s newest release, the kids aren’t urging their parents to go see the upcoming flick, “Imagine That”. If they’ve caught the preview, they might recall, “Hey, that sounds like Donkey’s voice from Shrek”, and then continue watching their beloved Spongebob and Patrick. The parents, however, might lean toward this family comedy more than their children, due to Eddie Murphy’s leading role. If you’re expecting to see a raw, uncut version of the comedic actor, you’re not gonna find him in “Imagine That”. There is no Eddie Murphy from “Boomerang” here (thank goodness). After the recent disappointment of “Meet Dave”, Murphy returns to the big screen, hopefully salvaging his acting ability to execute what a family comedy should be like. Unlike the prior production nosedive, the Eddie Murphy in “Imagine That” is refreshing and stars in a storyline that might be appealing to the both parents and children.

Evan Danielson (Murphy) is a successful financial analyst at a busy investing firm based in Denver, who only has free time to glance at his BlackBerry. He seems to be very skilled doing his job, but he failed to concentrate any valuable time on his other responsibilities: marriage and the relationship with his daughter, Olivia (Yara Shahidi). Due to a lack of a father figure in his daughter’s life, the seven year old is reliant on a blanket for security and imaginary friends to keep her company while her father gets lost in work, or she likes to call “The Land of Nowhere”.

During an important business meeting, an emergency message from school is received notifying him of his daughter’s behavior. He tries everything to get a hold of Olivia’s mother, Trish, to deal with the issue that he wants no part in. But to no avail, he succumbs and leaves the office. Upon arrival at the school’s campus, Olivia’s strong reliance on the security blanket is the culprit of the misbehavior.

Sitting alone under her blanket named Googa, Olivia is seen chatting away to imaginary characters while her class has gone inside from recess an hour ago. Evan realizes the blanket dependency has gone far enough and doesn’t have extra time to meddle in her problems. So, he feels it’s time to take away the Googa and rip it off like a band-aid. After a brief discussion with Olivia, he takes the blanket and walks away. Seconds later, she throws a tantrum. Deciding to finish the counseling another day, he returns the blanket and goes back to the office.

Evan has his own issues to deal with in the office. After assuming the head of his region, he is challenged by a competitor. Evan goes head-to-head with Johnny Whitesnake (Thomas Haden Church) who is a nature-loving Native American with a niche in investing and uses a unique approach in his presentations by incorporating the Native American culture. When Johnny takes grabs the attention away from Evan’s client by utilizing his unique techniques, Evan realizes he is no longer the head of the tribe and needs a fresh approach to keep his clients and to keep his job. Now, work has also become another challenge in Evan’s life that leaves him falling asleep in front of three flat screens. It’s Evan’s turn to take full responsibility of Olivia on a week that her mother (Nicole Ari Parker) is busy focusing on her own tasks. Evan decides to get rid of the Googa once more while dropping Olivia off at school. Instead of getting a cooperative daughter, he gets another ear-shattering tantrum. After trying to shift the burden to Olivia’s mother and failing, he has no choice but to bring Olivia with him to the office. En route, Evan is disregarding the insider tips that Olivia is trying to give from her imaginary friends Koopitta and Mopitta about the investments he was presenting.  After getting Olivia situated, Evan enters his scheduled meeting tardy only to find his client favoring Johnny Whitesnake’s presentation over his.

Seemingly defeated, Evan returns to his desk and soon realizes that his assistant has joined Johnny Whitesnake’s tribe. His former assistant also notifies Evan that the meeting with his client has been pushed up by Johnny Whitesnake, who will be joining in on the meeting as well. As he quickly tries gathering his notes, he realizes they’re missing. He discovers that his notes are now a part of Olivia’s artwork that displays her imaginary friends’ ideas of the companies being presented. Reluctantly, he takes the papers with decked out in glitter, doodles, sparkles and even cut out into snowflakes and enters the meeting. Once again, Johnny Whitesnake seems to have won his clients over once more with his Native American appeal. Evan, who is fed up, has a meltdown and starts presenting his daughter’s artwork just as she had advised.. Remarkably, all of his daughter’s predictions were correct, despite exhibiting a helluva presentation using the terminology of a second grader like “poop”, “kaka”, and “k-i-s-s-i-n-g”. Evan is finally interested in his daughter’s imaginary world. Since Olivia provided accurate tips through her friends, he is ready for more advice. For the first time, Evan plays with his daughter and ventures into her imaginary world only to get more insider advice on his investing prospects. He dances, sings, and persuades his way through the imaginary Kingdom of Somewhere. Evan passes fire-breathing dragons along the way to meet the wise queen, Kwali, and the princesses, Koopitta, Mopitta, and Sopitta, who have kept his daughter company for so long.

The director, Karey Kirkpatrick, doesn’t take the audience into an imaginary world like “Chicken Run” or “Over the Hedge”. But, one does notice the strengthening of Evan and Olivia’s relationship. As their father-daughter relationship increases, Olivia’s dependency on the Googa decreases. Then, what used to be Olivia’s security has become Evan’s due to all the success he is generating from the accurate predictions. Inevitably, the time comes where Evan must decide which is more important: his career or his daughter?

Aside from Murphy’s goofy dance movies and funny voices, the kids might not laugh out loud as much as the parents will. The parents will enjoy this film because it is classic Eddie Murphy who dims his spotlight to let the adorable newcomer, Yara Shahidi, shine through. Yet, with the lack of a visual imaginary kingdom, the kids aren’t able to get into the story as much. This might be hard to imagine, but “Imagine That” might be Nickelodeon’s first movie that is more appealing to the parents than it is children.