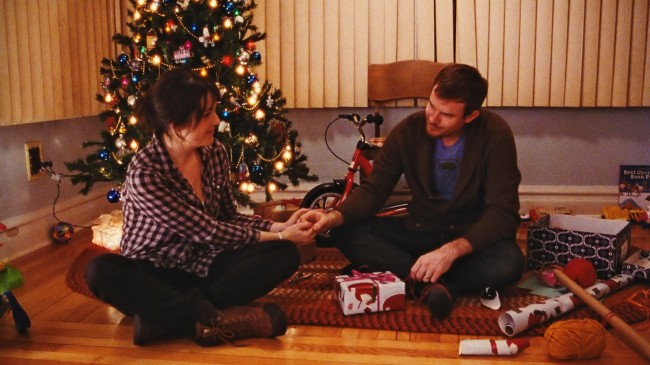 The tepid, doldrums approach of lo-fi cinema is evident in minimalist director Joe Swanberg’s latest drama, Happy Christmas. The film is grainier than a bag of wheat, but at least the camera isn’t bobbing like a buoy in a directionless ocean (all that often, anyway). Swanberg has been entrenched in the often-hazed genre of mumblecore for what seems like decades now. And while his earlier pictures, Hannah Takes the Stairs and LOL, provide some anticipatory, roguish, and rough-around-the-edges direction, you would expect Swanberg to climb out of his low-visibility fog at some point in his career. Last year’s Drinking Buddies lacked the visual capriciousness of his rookie works, there is no doubt, but here we are, one film later, regressing to the point of staring down the same, familiar, barrel of the director’s reliably bleary style.

Swanberg’s film revolves around the foibles of family: Jenny (Anna Kendrick) cant sink her teeth into a reliable sense of self. Meanwhile, her brother, Jeff (Joe Swanberg), is navigating the waters of fatherhood with Kelly (Melanie Lynskey), his wife.

The listless and clunky dialogue of the mumblecore genre prides itself on its inert, slice-of-life exchanges. And while the minutia of these movies could be dissected ad nauseam, I’m under the impression that Swanson’s peers – Jay Duplass or Aaron Katz, for instance – are better at culling fascinating dialogue from their respective casts. Here, Anna Kendrick fuels the screen with her innate likability, regardless of the milquetoast story – though that sort of fumbling endearment only has so many miles to the tank.

Happy Christmas is maladroit and simple, existing only because it can. The dialogue whirs to the ground like a nicked Frisbee, and we’re left, as an audience, wondering what the whole purpose was. To delight with wit and stun with existential prowess? Not quite. The improvisation is languid and lifeless and even the actors seem to be caught in a sinkhole of impoverished plot. By the end of Swanberg’s derelict opus, you wonder if the director has anything to say, or if he just has actors that he wants to work with.