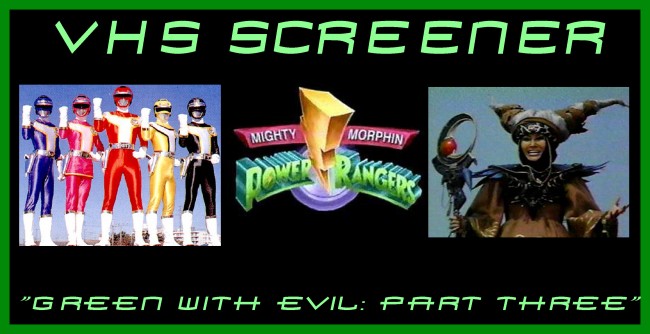 Let me tell you, I was THRILLED during one of my thrift store hunts to find this in a dollar VHS bin: Mighty Morphin Power Rangers: Green Ranger Miniseries: “Green With Evil”: Part 3 of 5!

I did a little scouring on the internet to determine whether this does, indeed, qualify for VHS Screener status. It appears as though some original Mighty Morphin episodes have been collected onto DVDs, but I could not find specific mention of the “Green With Evil” series, so I’m tentatively calling it a lost VHS find. If anybody finds this series on DVD, please leave me a comment!

I think I love this 25 minute videotape so much because it is so incomplete. Part 3 of 5?? You really couldn’t fit more than one episode on a VHS tape? Of course, their ploy is quickly revealed before the episode begins: if you submit five proofs of purchase from the Green Ranger series you will get into the Power Rangers Fan Club! God, if only this were still true, I’d hunt the rest of these down on eBay or something.

Oh man, oh man, a quick eBay search indicates that this is actually possible! Somebody buy me these, okay?

Anyway. On to the episode. Rather than outline it for you blow-by-blow (so tempting), I present:

ONE: THAT RIDICULOUS INTRO
Okay, I know it’s not unique to this series, but I will never grow tired of the Power Rangers theme song, or Zordon the alien intelligence seriously declaring, “We need teens with attitude!” Unfortunately, we don’t get a lot of Zordon in this episode, because his floating head has been discombobulated by the Green Ranger.

TWO: JASON’S SPACE FIGHT
So ludicrous. The episode opens in media res with Jason rolling around on a foggy floor in space, while Goldar clumsily stabs at the ground with his sword trying to find him. Goldar, you jackass, he is right in front of you! RIGHT IN FRONT OF YOU!

THREE: RITA REPULSA
I love Rita so much. She has crazy powers, but for some reason always fails. In this episode she can teleport people at will, and apparently block the sun at will, but it’s just not enough. When I was a kid I was perpetually confused about why her voice did not sync up properly to her mouth movements, while the Rangers always spoke normally. I thought, man this must be one evil woman, she is crazy. Nobody explained dubbing to me, okay??

FOUR: SCORPINA!
Hell yeah, Scorpina! Rita summons this deadly warrior from a rock and a scorpion. She is a mega hawt Asian chick in metal fetish gear, and she is ready to bust some Ranger ass. Unfortunately, the editors of this episode really dropped the ball and only included Scorpina for two minutes. One minute she’s setting out to fight the Power Rangers, and the next she is returning in defeat! I DEMAND TO SEE SCORPINA FIGHT FOOTAGE, SABAN ENTERTAINMENT!

FIVE: FROLIC SEARCHING
The gang decides to split up to look for Jason. Kimberly and Zach head out together. They’re so ineffective it’s great. First they check the Gym and Juice Bar (like Jason’s just chilling and not answering their calls, maybe?). Then they run through a park. And it’s more like a frolic than a run, it’s just beautiful. Their romantic romp, however, leads to my next favorite thing.

SIX: ZACH’S SWEET, SWEET MOVES
Kimberly and Zach are attacked by the Putty Patrol, which of course leads to some rockin’ ninja action. And Zach, the, aherm, Black Ranger, exhibits his crazy breakdance ninja moves. He’s spinning and grooving and generally just opening a can of whoop-ass.

SEVEN: TOMMY
Tommy, the crew’s new friend, is so freaking ominous it is almost painful to watch. For one thing, he wears all green. For another, he delivers every single line of dialogue with intense malice and smugness. And nobody notices!

“Hey Tommy, have you seen Jason?”
“He was supposed to meet me after school, BUT HE NEVER SHOWWEDD!! SNARRRLLL!”
“Oh… okay!”

EIGHT: JASON VERSUS THE GREEN RANGER
Rita zaps the oh-so-mysterious Green Ranger (who can it beeee?) up to the space station to fight Jason. This kind of pisses Goldar off, but he cedes the floor. Barely any fighting ensues, but the following awful taunts do instead:

ZING!! Good comeback, Jason. He is weeping behind that mask.

NINE: BILLY GETS A MOMENT TO SHINE
Everybody knows that Billy, the Blue Ranger, was the crappiest ranger of them all. Sorry Billy fans, it is a known fact! Did you ever play the Super Nintendo game? Billy’s fighting move was to hide his face with one hand and flail uselessly with the other one. He sucked! Anyway, he gets a good moment in this episode. The gang has been trying to get Jason back from outer space, and Billy realizes that by fixing his own wrist communicator, he can teleport Jason back. Don’t ask me how the hell it works, it just does!

TEN: RITA’S BIG PLAN
The episode ends on a major cliffhanger, of course. Rita has decided to make Goldar growwww! And then, when the Rangers form into Megazord, she will cut off the sun with an eclipse at a crucial moment, severing their vital source of solar power! It’s such a brilliant plan! DON’T BOTHER ASKING WHY SHE HAS THE POWER OF ECLIPSE, JUST ACCEPT IT.

Phew. And that’s the end of Part 3. I’m kind of tempted to pick up the rest of the series, but I’m pretty sure I could just predict how it ends. Goldar wins the day, of course. 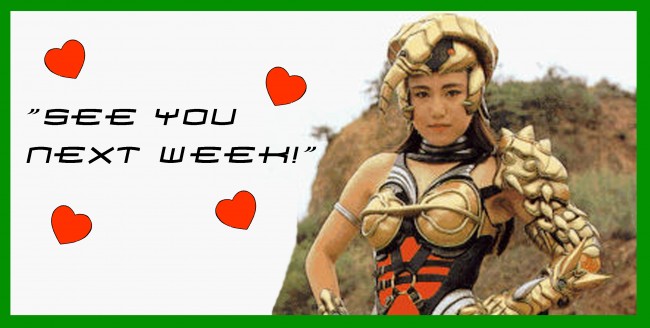 NEXT WEEK ON THE PHENOMENAL COSMIC MOVIE COLUMN: This column with henceforth be presented by Pepsi McReese’s Chevrolet Corporation.