Home » Film » Get Him to the Greek

Get Him to the Greek 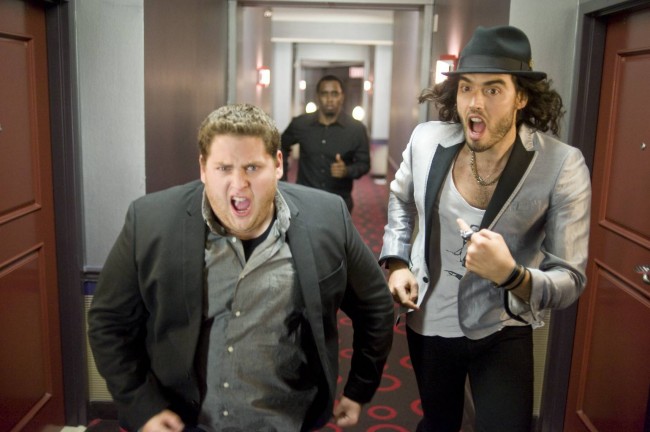 Jonah Hill always has the coolest adventures. I especially envied him in Superbad; going to college parties and smuggling out alcohol in laundry detergent containers wasn’t exactly the type of experience I had in high school. The next logical step in this epic progression takes him from partying with co-eds to partying with rock stars. Well, one rock star in particular: Aldous Snow (Russell Brand), of Forgetting Sarah Marshall fame.

Spin-offs can go really horribly wrong (I’m thinking of Joey), but luckily Snow is such an immense character that Get Him to the Greek has ample material to carry it along. The film essentially revolves around Aaron Green (Hill), a record company intern, getting Snow from London to Los Angeles in three days to play a show at the Greek Theater. What happens over the course of those three days is pretty standard drunken chaos. There are unexpected detours, sexual misadventures, bad drug trips, and even the infamous adrenaline needle. What sets this film apart from others in the same vein is the particular brand of Judd Apatow’s comic appeal that permeates the dialogue. It’s not quite as hilarious as some of Apatow’s other productions, but the style of humor remains the same and several witty lines and over-the-top illicit substance scenes keep the amusement level high.

Unfortunately, the film takes a fairly unnecessary turn towards Almost Famous during the second half. Aldous Snow is fun, charismatic, and a pretty nice guy even when he’s plastered, but when the partying is over, the film finds him heartbroken, lonely, and helpless – a sharp dramatic turn that slows the otherwise well-paced movie. Mirroring Russell Hammond, Snow disrupts his earnest new friend’s love life, jumps into a swimming pool from a rooftop, and redeems himself through honesty. In places where the film could get tacky, however, the ridiculous lyrics of Snow’s songs manage to draw attention away from saccharine emotional interplays at just the right time. Though the movie could have easily done without the character melodrama, the offenses aren’t so glaring as to ruin it and the greater insight into Snow’s psyche is perhaps endearing; it just puts a damper on the comedy.

In all, there are two really great things about this movie: the actors and the soundtrack. Perhaps it is Brand’s own personal history that allows him to play the role of Snow so well, but he captures it to the minutest of details. Brand looks, walks, and talks like a rock star but his precise comic timing makes Snow just enough of a caricature that it’s alright to not take him seriously. Hill’s bug-eyed reactions and hoarse delivery continue to work well for him in this film and he fills his more prominent role well. Probably the best surprise, however, was Sean “P. Diddy” Combs in his role as record producer Sergio Roma. Some of the funniest scenes in the film involve Combs and part of me is thrilled that he was in this movie at all, in what I think must be his first non-serious role. The soundtrack is just as genius as the acting and really helped hold the film up at times. Performed by Infant Sorrow, Snow’s band, and Jackie Q. (Rose Byrne), Snow’s ex-girlfriend, the songs are actually well-written and enjoyable and the lyrics are cleverly profane (like less-extreme Spinal Tap). When the plotline begins to get awkwardly cliché, the acting and soundtrack (and a couple of cameos, really) hold everything together and keep the film from completely losing its rock-and-roll spirit.

One last small note of appreciation must go to the refreshing marketing of film, which manages not to waste the best parts of the movie on commercials. The trailer is almost like a companion chapter to the film, featuring scenes that are relevant but never shown in the movie itself. Somehow this builds a more complete, real-life feel to the characters and their interactions as if there is some sort of back-story – a genuine memory of a days-old conversation. Despite the comedic tone of the film, there is a disarming feeling of reality behind it, especially regarding Aldous Snow. I don’t feel too weird for wishing I could go to a Infant Sorrow concert. I’ve already downloaded a few of their singles.