So Long to the Slasher 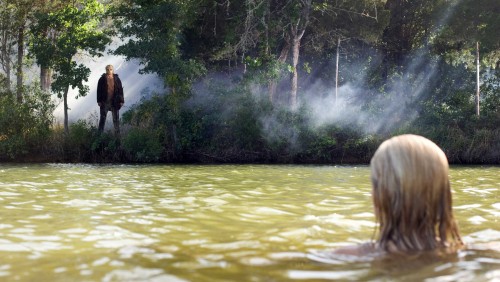 The latest installment in the Friday the 13th franchise is destined for failure.  Sure, it’ll pick up some box-office flutter during the weekend as prepubescent gore-hounds and sex-crazed teenaged couples flock to the local multiplex to get a glimpse of violence and nudity.  But let’s sit down and look at this logically.  The jerk who directed it is the same guy who ruined and rebooted the Texas Chainsaw Massacre series.  If that’s not bad enough, the script was written by the same screenwriting team that produced the script for Freddy vs. Jason, and I don’t need to remind you how bad that was.

So, I’ll begin by saying this isn’t a remake.  Yeah, sorry.  I’m not even sure if this is really a reboot.  It’s more of a vague sequel, a sequel that didn’t go ahead and call itself “Friday the 13th part 12” because the line of continuity has been broken so many times since part nine, Jason Goes to Hell.  Between then and now, there’s Jason X (in which Jason is cryogenically frozen, taken into space, and someone becomes one with a massive space cruiser) and the apocalyptically bad Freddy vs. Jason (in which Freddy Krueger and Jason Voorhees battle to the supposed death over who gets to kill who).  The closest the film gets to a remake is the re-filmed sequence in which a counselor beheads Mother Voorhees that plays during the film’s choppy opening credits.  The closest it gets to being a reboot is the new way Jason finds the familiar hockey mask, abandoning the not-so-familiar (albeit original) burlap sack mask..

So, the film is instead some sort of distant sequel that breaks every convention already established by the film series.  In the film, Jason Voorhees sets traps, takes a hostage, carries the bodies of his victims back to his lair, and lives in a system of tunnels beneath Camp Crystal Lake and massive surrounding area.  There are so many inconsistencies within the characters and location that it almost seems like the filmmakers and screenwriters have never seen a Friday the 13th film.  Sure, there are weak notions other films in the franchise (a reboot of the sleeping bag murder, for one, Jason being hung in a barn with a chain for another) but none of these throw-backs are deeper than something found on a Wikipedia article.

The story is asinine to say the least.  It combines three different story arcs because the scriptwriters just don’t know how to center their attention.  The first is the story of a group of hikers searching for a legendary grove of marijuana that serves as little more than a forty-minute introduction.  From there, the audience is simultaneously introduced to the second and third story arcs.  The first of these is that of a troubled young man in a leather jacket who rides a motorcycle.  The screenwriters probably thought this gem of originality was the shinning achievement of the whole project.  Anyway, this guy’s looking for his sister, who was a member of the pack of weed hunters.  The last story arch, which weaves in and out that of the closure-seeking motorcycle-riding leather jacket aficionado, is the story of a group of teenagers en route to a secluded cabin in the woods.  Any further explication is unnecessary: there’s a lot of sex than most everyone is killed in a string of murders of varying creativity.

I’m sure you can get a clear picture of the film by now.  For those of you waiting for a good entry into the “slasher” genre, I apologize deeply.  But after I’m through with that, I have to ask you why you’re waiting.  The thing is, I don’t think there’s ever been a good slasher.  I mean, something with cinematic quality that can rise above being something other than a B-movie (an no, I’m not in the league of so-called writers who use the terms C- or D- or, God forbid, Z-movie… and if you’re one of those people, give me your address so I can come punch you in the teeth).  The closest thing is John Carpenter’s Halloween, which, realistically, has more hallmarks of the thriller-suspense than it does of the slasher.  Even more recent attempts which have been hailed by fans as cult successes, such as 2007’s Hatchet, achieve at being little more than parodies of the genre instead of legitimate contributions.

The film does have one merit.  The slasher genre may be dead, but after seeing the horror films to be released this year, I’m within certainty that the torture-porn trend in horror films may have run its course.  Hostel 2 a few years ago was a huge flop, and sure we had Saw V this past Halloween, but the audience for that franchise is dwindling rapidly.  Besides that, we haven’t seen much in the way of this sub-sect of horror outside of the straight-to-DVD world.  Friday the 13th keeps its gore in perfect proportions, never over-stepping the boundaries believability.  And the torture is in low supply (the closest thing to it is an incident involving a bear trap).  So fans of horror will probably appreciate this return to reason, but the film offers little more.