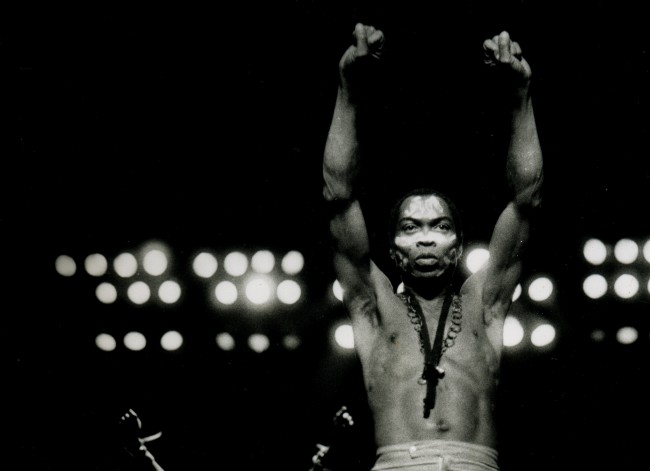 Alex Gibney’s documentary about the enigmatic spiritual warrior, Fela Kuti, finds itself bolstered by primary colors and pulsing enthusiasm. The counterculture musician, lacquered in sweat and crosshatched with warpaint, remains, at the end of Gibney’s expressive exploration, a rattling shadow in the distance. An opponent of political hubris, Fela glistened with dissonance. Still, not many know of the musician’s existance, let alone his advocacy for human rights. In Finding Fela, Gibney casts a wide net on the late-songwriter’s life by interviewing his family, friends, and contemporaries.

Strangely, the director decides to shoehorn scenes, from a Broadway play based on the musician’s life, into his documentary. So we get a stream of talking heads interwoven with bombastic set pieces that recreate Fela’s journey. It’s a distracting, unorthodox tactic that shucks the documentary of a consistent tone. Gibney is almost more preoccupied with the musical’s direction than he is with his own. And because of the volatile balancing act, Fela the man gets overshadowed by the man playing Fela. It’s a strange splicing of artifice and reality that feels guiltily driven of vanity. With the big-budget musical smothering archival photographs, Finding Fela becomes a sort of clumsy, re-purposed mess. At one point, the vibrant charade turns into jarring feedback, and the ensuing noise tramples over its own subject.

Because of the strategic pandemonium of the songwriter’s material, it was difficult to produce a play based on Fela’s life. Truncating the artist’s lively, cataclysmic twenty-two minute songs into sample-sized snippets turned into a problem for the musical’s director (again, what does this have to do with Fela?). We’re faced with the following questions: how will the authenticity and atmosphere of Fela’s music survive? How will the cast dive into the sweat-soaked choreography? How will unfamiliar and familiar audiences alike take to this modern interpretation of Fela’s life? What does this have to do with Fela himself? That question can be answered: absolutely nothing.

Still, when the documentary actually speaks on its subject, the motors start humming.

Gibney asserts that Fela wasn’t as recognized as Bob Marley, because his music wasn’t as polished and accessible. Marley, while being supported by talented musicians, was not as overtly unpredictable or experimental. Fela’s freewheeling, jazz-inundated, incendiary compositions glowed and bobbed with emotion and live wire energy. Maybe more unapproachable than the Wailers’ frontman, Fela’s barbed and structurally buoyant melodies still showed chaos through the accessible channels of throbbing horns, hypnotic percussion, and ethereal backing vocals. It was a cauldron of intrinsic existentialism and rabid anti-establishment. By all accounts, Fela was rock and roll – a badass.

While Fela was an orchestra of rebellious charisma, the man himself, outside of the volley of lights surrounding him, remains an inscrutable fog. Gibney is a good director with principled ideals, but this documentary does nothing to unearth the mystery of its subject.