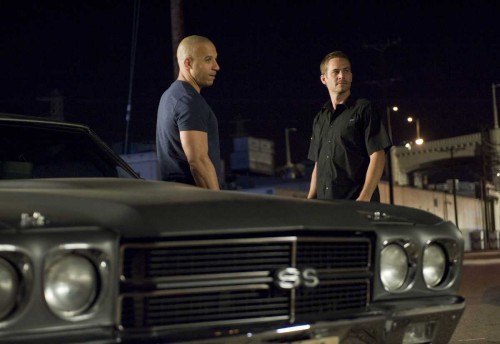 With pop culture self-cannibalization increasing at an exponential rate, stepping in to the theater for Fast & Furious was like prying open a time capsule from a bygone era. A simpler era. An era when cladding your four-door Honda Civic with a shopping cart handle and a carbon fiber hood was socially acceptable. An era when re-badging your mother’s automatic Acura with a Type-R logo and convincing people that once you add NOS it will run in the 8s did not result in immediate expulsion from the community. This era is 2001. Are you feeling nostalgic? Neither am I..

Apparently, the producers of this film didn’t get the memo. When the original film rode into theaters in 2001, it was as much a cash-in on the illegal street racing fad as it was a cash-in on the rising star of Vin Diesel. And while The Fast and the Furious was big, loud, and dumb, at least it was relevent. Eight years and two non-essential sequels later, director Justin Lin’s latest offering looks as out-of-place as a Re-Elect Gore in 2004 bumper sticker on the back of a neon green Supra.

Too fast for superlatives, Fast & Furious catches up with Dominic (Diesel) and his long-suffering girlfriend Letty (actress Michelle Rodriguez) as they heist a moving fuel tanker. A Death Proof-inspired game of Ship’s Mast develops when the driver, combustibility be damned, opens fire on Letty. After unhooking the tanker, a pensive Dominic decides arbitrarily that after eight years of thievery, this lifestyle is too dangerous for Letty and leaves her in the middle of the night. As she goes off in search for her beloved, Letty is run off the road and then shot dead at point blank range. Irony!

Despite having only ten minutes of screen time and ten lines of dialogue, Letty’s murder serves as the emotional catalyst for the rest of the film. Much like his career, Vin Diesel plays a man with nothing left to lose. Dominic conducts an investigation that traces back to an illegal street racing crew that traffics drugs for the enigmatic Braga. As Dominic works to infiltrate the racing crew to exact his revenge, Special Agent Brian O’Conner (Paul Walker), decides that he is emotionally invested in Letty’s death–despite being a persona non grata among Dominic’s crew due to the fact that he is, you know, a snitch–and conducts his own investigation that leads to Braga. When word gets out that Braga is conducting an illegal street race to find his next trafficker, Dominic and Brian both enter. Now, if I were to run an international drug smuggling operation, I would probably not use a candy-colored Nissan Skyline with illegal mods as my primary mode of transit–but what do I know? Anyway, Former friends-turned-adversaries work together to fight a common enemy as the film degenerates into a 90-minute episode of Wacky Races.

The most remarkable thing about Fast & Furious is that eight years into the franchise, it still feels like it is written by a thirteen year-old. Unmotivated actions such as artificial time constraints of the “You have 72-hours to bring him in or I’m shutting you down!” variety coupled with the gruff police captain who wonders aloud “Just what side are you on?” underscore how outdated this series has become. Entire plotlines hinge solely on the fact that the characters were in the original film with no relation to the story at hand before unraveling into a series of gunfights and car crashes of the lowest common denominator.

When VH1 releases I Love the 00s, The Fast and the Furious deserves it place it in the pantheon of millenial kitsch and pop cultural faux pas. Yet, in the twilight of this decade, I would like to think that audiences demand more than what 4 Fast 4 Furious has to offer. Like so many Honda Preludes with cut coils before it, Fast & Furious is an uncomfortable ride before breaking down on the side of the road.