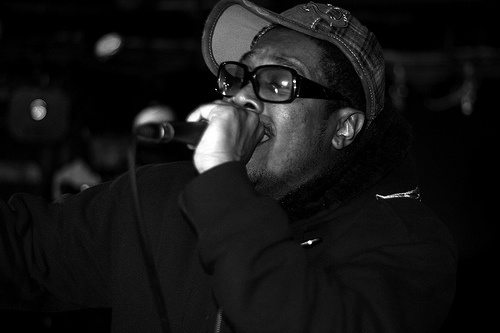 Elzhi is certainly heartfelt and content-driven, but he brings his bag of tricks and nuances on “Lead Poison” to engage with his listeners by not only being earnest, but also by being clever and lyrical.

Jason Powers, or Elzhi, first found critical acclaim alongside iconic producer J Dilla through his former group Slum Village. This was my introduction to him. A few EPs and a full-length later, he released Elmatic: a recreation of Illmatic transposing Elzhi’s Detroit as a backdrop for Nas’ Queens. An ambitious project, Elzhi’s original slant on a classic kept the essence intact while providing listeners something fresh to listen to. Elmatic weaves nostalgia together with the experience of something new. When hearing this re-imagination, I begin to regard the Detroit artist’s craft. After spending the last month or so listening to Lead Poison, there is no longer any ambiguity about my loyalties as a listener to the emcee.

The productions are not the sample-ridden boom bap typical of his era of hip-hop. Slum Village was a far cry from some of the hardcore bangers characteristic of the 90s — this made them distinguishable and fresh. Musically, Elzhi has aged well. His spacey soundscapes—akin to Zion I or Kid Cudi—make this album versatile. The synth-based beats conjure up feelings of both melancholy and joy, using pensiveness, simultaneously, as the medium for both. On tracks like “Friendzone,” traces of that Dilla soul are overt. Elzhi even pays his respects to the aforementioned producer on February: “Oh February, February / You took a friend from me that wasn’t just some celeb you bury.” This is not the album to jerk your neck to. You pop Lead Poison in when you need to smile, cry, and have a cathartic experience with soul-shattering instrumentals that will compel you to close your eyes, silence the sounds of the world around you, and—just—listen.

This album is most impressive in its concepts. Too many emcees gravitate around a brand of subject matter—a certain worldview or political message for example—and put out homogeneous content so that releases are more or less an iteration of the same thing from track to track. To an extent, a listener should expect this; artists are expressing a collection of ideas and experiences so that there will inevitably be some overlap. As a listener, I want an album to be cohesive in its content. The difference lies in presenting these ideas and experiences in novel ways. Elzhi does this by consistently committing to concepts: by finding some way to distinguish his experiences with distinct symbols, motifs, or metaphors like the month of February on the track titled after it. On “Alienated,” he describes his feelings of isolation by playing off of the word “alien” while taking his listeners through a virtual cosmic journey. Elzhi is certainly heartfelt and content-driven, but he brings his bag of tricks and nuances on Lead Poison to engage with his listeners by not only being earnest, but also by being clever and lyrical.

Elzhi has been an established emcee for a number of years. While Elmatic is an innovative homage to the legendary Nas release, it didn’t satiate me enough outside of its context to be considered a defining work. Lead Poison is a classic that is a landmark for the Detroit emcee. Slum Village has already proven their clout, but Dilla is the eclipsing presence of this group. Elmatic piqued me enough to consider Elzhi outside of the group. Lead Poison has me both enamored and eager to hear what he will drop next.