Of Love and Bore 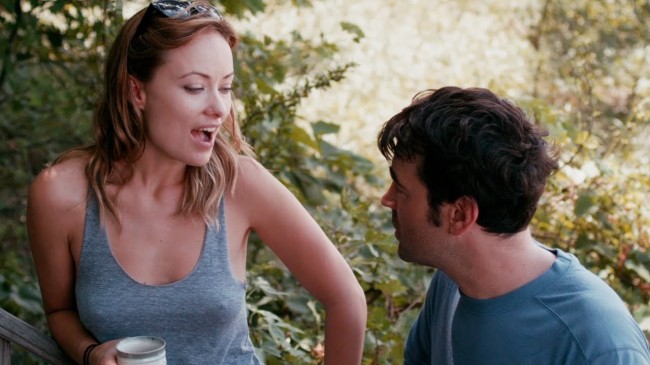 Jeremiah Johnson beards, more flannel than Kim Deal’s closet, and ornate tap handles with everything from wooden whales to serpentine snakes emblazoned on them. The craft beer industry admonishes the sud-soaked mega-marketing of macro brews, and instead revels in the bitterness of hops, happiness and irascible pride. While the swell of rolled up sleeves and DIY enthusiasm has grown exponentially over the past few years, mainstream acceptance of microbreweries hasn’t broken the concrete until recently.

Joe Swanberg, the elder statesman of the mumblecore genre, turns his focus to stouts and pouts in his latest picture, Drinking Buddies. As you would expect, the aforementioned film is studded with the roar of hops funneling out of bags, kegs being chilled, and lips becoming foamier than the whip on a key lime pie. Still, even with the whirring forklifts and clang of growlers, Swanberg’s opus is less about craft beer than it is about the uneasy ebb of morality and friendship.

Kate (Olivia Wilde) is a Swiss army knife at the brewery she works for. Her feet paddle across the floor with Morse code rhythm as she takes care of everything from barrel orders to event coordination. She is the one to eradicate any abscess at her place of employment. Kate is a popgun of snark and fortitude. Pelting her crew with zingers and carbonated energy, she is the livewire that everyone, including her co-worker Luke (Jake Johnson), pines over.

Kate’s boyfriend, Chris, is played by the habitually half-mast Ron Livingston. From playing the jilted, sunken, and aloof protagonist in Mike Judge’s Office Space to honing his dramatic craft in the HBO WWII drama Band of Brothers, Livingston has built his career on crestfallen facial tics and furrowed brows. Because Kate has more energy than a Duracell factory, Chris has an issue connecting with his mercurial, hop imbibing girlfriend. The imbroglio is worsened when the duo spend time together with Luke, and his flame of sometime, Jill (Anna Kendrick).

Swanberg’s film crackles with organic, beer specked conversations and texturally convincing dialogue. There is never a moment when Drinking Buddies seems insincere or moribund, thanks to Olivia Wilde’s brilliant performance as a barbed twenty-something on the precipice of emotional decline. This is an authentic work branded with confidence and fearlessness. The problem with Drinking Buddies is that, while complex and refreshing, it also feels like a filibuster of tiring monologues and eye lolling spats. What works for the film is also what makes it feel exhausting. After awhile, the morose exposures of these displaced, middle class friends begin to feel both boorish and soporific. Olivia Wilde remains great, but after time it becomes painfully evident that Swanberg’s story is nothing more than passable and somewhat diaphanous.