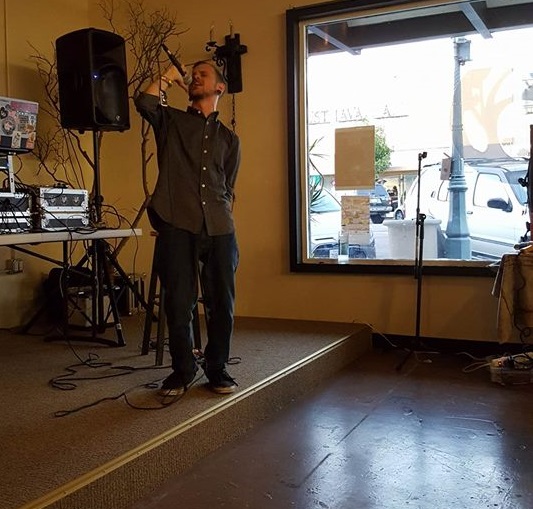 Garrett Gretler, emcee and author of the piece you are reading

Recently, I had the earnest pleasure of sharing a freshly built stage with a few brothers in rhyme. We kicked off the first of hopefully many more art-oriented events to come at Mary’s Downtown Plaza (name under reconstruction) in the heart of Chula Vista. The lovely Yessenia Husley, alias ErthOne, and her mother Mary were gracious enough to provide a space for us to gather in a meeting of creative minds that will forever be a reminder of the love that is born in a dynamic cultivation of expression between artists and an audience. Performing is nothing novel to me, but the experience I had here was.

The event was entirely in-house. Yessenia is one of our own. She is an artist of many talents that has participated in past events with us. She belongs to our ranks. The void of a host caused emcee extraordinaire Kaus to step in – albeit grossly last minute – and fulfill the pristine function of an emcee: He did a phenomenal job. Meanwhile, other artists that didn’t strictly belong to our closely-bonded group of friends participated, from Derty Kevin’s live art with a canvas to Bob V.’s acoustic set, the love felt was mutual.

This is part of why this event held so much weight. The sense of community and belonging that was felt here, whether it existed prior to this event or not, was ubiquitous in everyone that attended.

Even the staff, while diligently working, managed to find a way into all our hearts with the warmness and exuberance that they offered. They truly exemplified what it means to find joy in your work and, in turn, extended an element to the show that would have been remorsefully absent without them.

“What happened recently needs to be the new standard.”

While the crowd was a little inept at call-and-response, it was because they were so eclectic. Not all of them were familiar with the conventions of Hip Hop or how to be interactive with it. This didn’t matter. We had young and old, republican and liberal, intellectuals and party-animals out to have a good time with us. Even the old-jovial drunk next door who had built our stage was feeling our music. Conversing with him afterwards, he said something in a Rick-like cadence (of Rick and Morty), along the lines of: “I didn’t understand urrggh half of the shit you were urrggh saying up there urrggh, but I sure felt it. You did great urrrggh.” While I may not always agree with Trump supporters, this by no means bars us from coming together in jubilee to celebrate culture, even if it is centered around kids and that damn rappity rap music. This event proved that social boundaries—the compartmentalization of people into categories respective of their political, musical, or any other predilections—can be broken, and that is beautiful.

The evening culminated, for me, after we had closed up shop and only close friends and family remained. Wine bottles were opened, tears were shed, freestyles ensued, and laughter glued it all together. We celebrated Yessenia’s birthday with a delicious cake: I tried the delicious Lemon Basil Chicken Artichoke sandwich (highly recommended), and I talked with Mary about how great the word “fuck” is—I had to temper my set for the children’s sake.

I was so enamored with the place, I went back two days after the show, the day after Yessenia had suffered a devastating loss, just to enjoy the company and support one of the most talented and loving individuals I’ve come to know. We closed up shop early as I hung out with her and another employee’s little ones and I pretended to work so they would feed me. A 6-year-old literally swept the floor with me as her pile towered over mine. 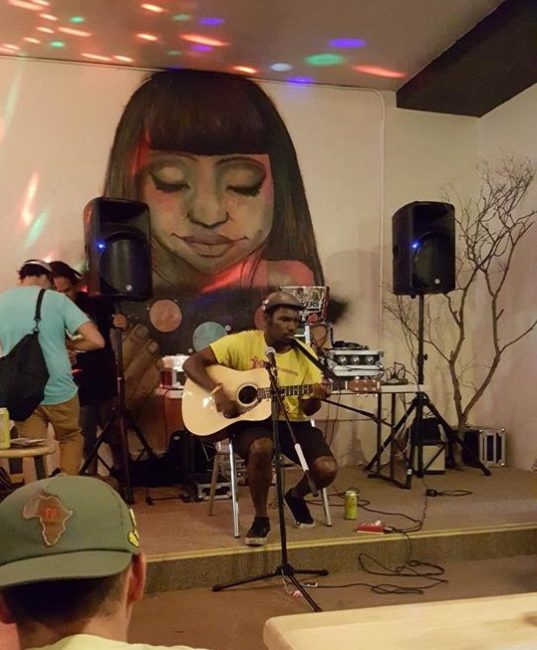 “…it’s important to support venues that are an able conduit for this to stay afloat.”

In the past, performing usually means some superficial exchange of handshakes and daps, a general disregard for any artist that isn’t part of your crew, and a cursory reflection on the impact of art. Interactions often feel obligatory and insincere. This isn’t always true, but it’s a generally pattern I find happening too frequently. What happened recently needs to be the new standard. If we, the community, want to make that possible, it’s important to support venues that are an able conduit for this to stay afloat. Go support Mary’s Downtown Plaza (perhaps Derp Deli Pub as soon as they get an alcohol and liquor license). We’ve created a lasting archetype for events to come, but it’s also just a great café/deli to enjoy some food that is freshly made, not handpicked from the freezer (like my job), and relax. Thank you to everyone who made this possible. Shouts out to Emphasize, Anaken, Audible Junkie, the 5D Family, everyone already mentioned, everyone else who participated, and everyone who came out. Don’t let the momentum die out.

“What is the meaning of life?”: this age-old question has been pondered and posed by philosophers and great-thinkers throughout the annals of human history. It has been misunderstood as a question for the mind, but it can only ever be answered fully by the heart: “This is it.”