Nothing New Here, Move Along 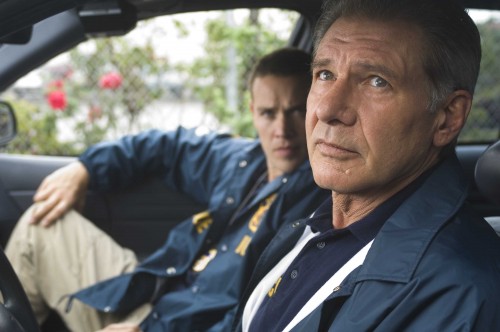 Director Wayne Kramer, in borrowing the same vignette format from Paul Haggis’s Crash, weaves a story about several characters, each similarly involved in naturalization issues, clawing for the idyllic cornucopia of American dreams. The vignette structure of Crossing Over, tired and droll as it is, has each character bouncing off one another like a grandiose pinball machine, trying to reach the high score of cognitive narrative. Because film deals with several current event issues – illegal immigration and the strain of naturalization being the largest topics – Kramer decides to write at least ten people, all suffering from relating circumstances, into the plot of the movie. Crossing Over, running at a trim 113 minutes, decides to take these ten people, sort out their problems with little consistency, and give us a thoughtful – but ultimately senseless – social commentary about the strain of our social climate. How do you take ten characters and examine their very different personalities within an 113 minute film? If we’re being technical, you could divide up the time and give each of them 11.3 minutes – talk about brevity.

Because Crossing Over is built as an ensemble picture, we get to see many actors and actresses thread a socially conscientious feather into their caps. The figurehead of the picture, Harrison Ford, is perhaps the worst aspect of the film. Playing an Immigration and Customs Enforcement agent, Ford is about as emotive as a Moai statue on Easter Island. When Ford does break his plastic gaze, he snarls, bunches his eyebrows into worrisome tuffs, and placates his cast members by looking half-interested.

Meanwhile, the rest of the cast, including Ray Liotta and Ashley Judd, play musical chairs in front of the camera for screen time. The bulk of the players, excluding the moderately likeable Jim Sturgess, exchange lines with blank faces and barely believable tones. In their favor, however, much of the dialogue seems to be written as a prop to get the director’s worldview across – nothing here sounds natural. No one in the cast can molt the unauthentic verbiage, remove the Hollywood sheen, or act as if they had actually seen an austere situation in real life.

Kramer, in wanting to show the hardships of reality, swipes all subtleties aside, and goes after each subject with a hacksaw. This movie isn’t a thoughtful examination of emotional hysteria – it’s a montage of one. To me, you either tell these stories with integrity, or you don’t tell them at all – anything less is insulting.

Aside from the shaky direction and inert performances, some of the scenes, filled with general implausibility and gratuitous nudity, distract the film even further. In one of the segments, there was so much bare skin I had wondered if director Paul Verhoeven had slinked behind the camera.

Now, let’s talk about the illogical pitfalls of the movie.

In one instance, a character named Hamid, already drunk from having had plugged his face with numerous shot glasses full of liquor, decides to purchase more whiskey after being thrown out of a neighborhood bar. Steering drunkenly, with the fuzzy camerawork suggesting that he is considerably smashed, Hamid drives to a local market to obtain the aforementioned hooch – this is where things get ridiculous. Hamid trips while entering the liquor store, witnesses a robbery, then, in a spell of sudden clarity and acute sobriety, rights himself, draws his pistol, shoots the criminals with unparalleled accuracy, and, to make the situation just that much more realistic, makes a grammatically sound exposition about morality and justice. Apparently, from this sequence of events, we now know that alcohol leaves the bloodstream when your body senses peril – this, of course, is absurd. These types of blunders – some more noticeable than others – leave the film pockmarked with stupidity and general ineptitude.

Crossing Over claims to be a movie filled with ideas. I don’t argue that. What I do argue is whether they were realized – and, from what Kramer shows us here, they are not.