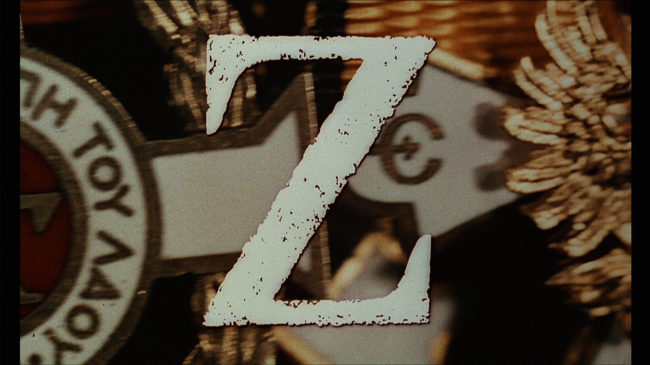 “Never has the panic and alarm I’ve felt from watching a thriller been so akin to real life.”

Z, 1969, is a quintessential Costa-Gavras’ film, albeit it is the first of its kind: biological metaphors about the establishment, a fictionalized account of actual events, leftist sympathies, government corruption, and a band of political active actors and actresses to put the assassination of Grigoris Lambrakis, a Greek politician, in front of a camera lens.

Even with the familiar tropes, Z distinguishes itself through its visceral and violent nature. It’s not that Costa-Gavras’ later films aren’t violent, but they aren’t as brash and abrasive as this one is—the clubbings, the clashes of demonstrators, the cars turned into weapons. The score complements this anarchy, creating an energy of fear and turmoil that is felt throughout the length of the film. The torture scenes in State of Siege do something similar, but Z expresses a larger portrait of political turbulence. The character types represent a multitude: the principled magistrate, the crooked politicians, the idealistic dimmed glimmer of hope in the honest politician, the ambitious journalist, the blood-thirsty thug manipulated by his own vice, the desperate patsy manipulated by his honest desire.

These characters are not one-dimensional; they are noticeably rounder than the personas in Costa-Gavras’ later works. Whether the characters’ allegiances lie with a right-wing extremist group, a left-wing pacifist organization, or a regime that would quell any polarizing force in the name of “law and order,” no two characters found under the same banner are identical. Whether it’s a sexual palate for young men, dissonance with the peaceful nature of your cause, or an affinity for Kamikazes—the three-wheeled truck (I thought the drink, too)—each character is more than an extension of their political affiliation. The implications of a government conspiracy are not the only point of interest. The characters themselves garner some intrigue, as well, despite character development having little priority.

Z remains a political thriller concerned with itself less as a proselytizing force for any particular policy and more as a condemnation of the scandal and foul play that permeates the political landscape of yesterday, today, and tomorrow – and it especially critiques the military dictatorship of Greece. Never has the panic and alarm I’ve felt from watching a thriller been so akin to real life. The political unrest and paranoia of this film mirrors our current social climate to a point beyond familiarity. It makes itself accessible to the populace in a way that is still relevant. It speaks to more than just the nerdy academics who keep all their history books after the semester is over, even though they know it could fund a whole night at the bar. Z is made for anyone who has felt the vehemence of the social and political dynamic— it is for everyone. Costa-Gavras finds the ubiquitous patterns in history, then turns the abstract into the immediate for viewer consumption.