The brevity of Vagabond’s unpretentious title speaks volumes about its content. Director Agnès Varda’s film doesn’t pirouette around its murky, cigarette butt dotted landscape. She lets you know, without burying the lead, that her picture is about loose rocks, bruised skies, and matted hair. Whereas subsequent films about drifters – Mike Leigh’s Naked, in particular – were more wily and unhinged, Varda’s world lives in the detached ambiance of quietly popping embers. No philosophical lobbying, no erudite maxims. In Vagabond, our protagonist’s eyelids are half-mast, her fingers ache from the cold. If she has barbed wisdom to share, she doesn’t care enough to hook up her words to one another like box cars to a train set. She’s moving along, soon enough, after all. 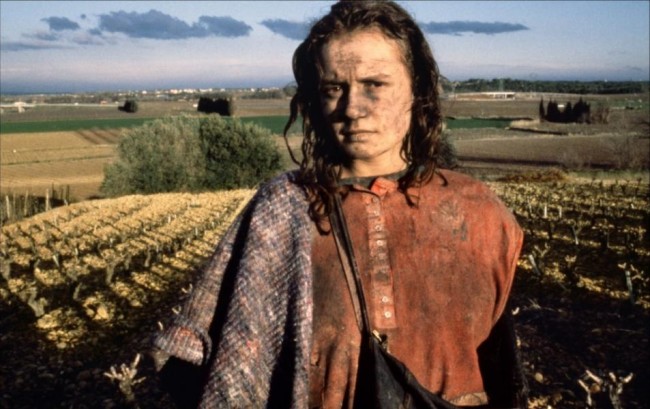 “There’s no dramatic camerawork, no flippant posturing. Vagabond is marbled in soil and sweat.”

The vagabond in question is Mona, as played by the wonderful French actress Sandrine Bonnaire – a thespian who electrifies with subtleties. A decade after this specific rumination on mortality, Bonnaire would give one of the best performances of all-time in Claude Chabrol’s La Cérémonie. Here, she floats, indiscriminately, from one house to the next: tearing apart a hoagie with her canines; clinking around the belly of a can of beans with a grimy spoon; setting up a makeshift tent in a cemetery. Mona is annoyed by the situational peril that surrounds her, but never enough to change her compass. In some cases, she even goes as far as to berate people that help her – “you’re filth like me.”

Varda’s direction is relatively placid. She films tightly, most of the time, leaving room only for Sandrine’s dirty brow to encase the frame. There’s no dramatic camerawork, no flippant posturing. Vagabond is marbled in soil and sweat. There’s an uncompromising honesty – even purity – about the lack of directorial fingerprints. This film is about one thing: Sandrine. It would be hard to imagine a director like Kelly Reichardt not exploring some of Varda’s themes in her own film, Wendy and Lucy, some twenty-three years later.

In spite of the dirt and soot, most of the film feels warm; everything from the grease splattered stove top to the paint curled walls are deliberately comforting in their marred aesthetic. We’re giving in to the coziness of mire. The accessibility of despair. Defeat is Mona’s livelihood, and Varda leaves us to the unlikely repose of that very currency. All things sadness and understanding.

From the wheezing discord of panicked violins to Varda’s self-effacing protagonist, Criterion’s preservation of Vagabond is essential. Much like the da Vinci painting, Mona is enigmatic – a deliberately esoteric ghost, emblazoned on the memories of those who had seen her.