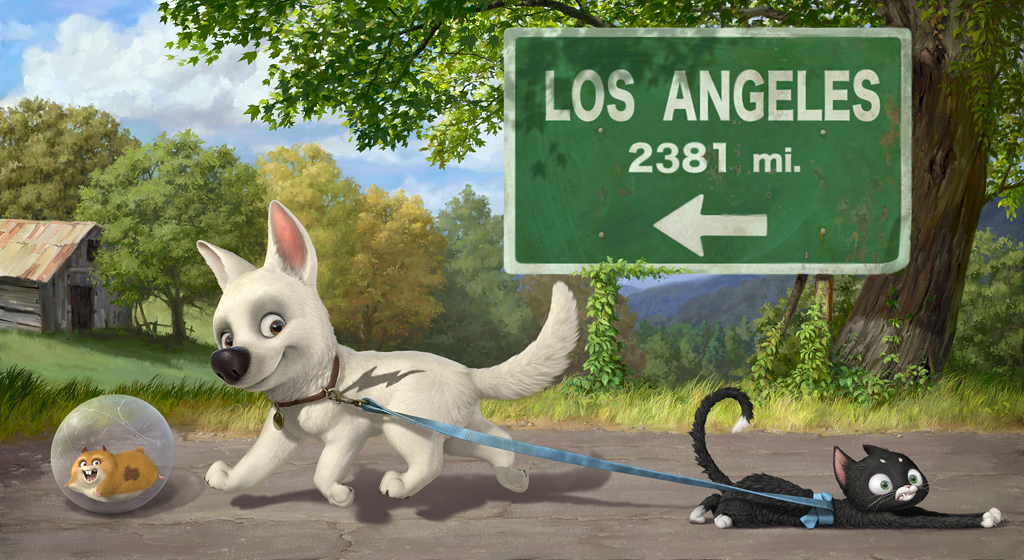 “If the dog believes it, the audience believes it.” That declaration, uttered by the television director of the show Bolt (voiced by Inside the Actors’ Studio host and part-time shill for GEICO James Lipton) shoulders the weight of the entire film. If you can stomach that line, please continue reading. If not, I just saved you five minutes of your life and you should thank me.

Still with me? Good. Bolt (voiced by John Travolta, possibly so he can afford another jumbo jet), the aforementioned gullible dog, is the titular character of his own television series. In the series, Bolt is given the Six-Million Dollar Man treatment to fight the evil Doctor Calico (voiced by a criminally underused Malcolm McDowell). From what I gathered, Doctor Calico’s evil schemes involve laughing maniacally and rope bondage. But I digress—by imposing a method acting regiment that would make Stanislavski roll in his grave, the television director refuses to allow Bolt to leave the set. The reasoning follows: If Bolt were to leave the set he would realize that he did not have superpowers. If he realized that he did not have superpowers, his performance would suffer. Dogs are very ethical actors.

Yet, after several seasons of Bolt, the audience began to tire of the formulaic storylines of rope bondage and giggling. The producer makes an executive decision to inject some despondency into the series by allowing Doctor Calico to capture Penny (Miley Cyrus), Bolt’s “person.” Of course, the director would not allow Bolt to know that Penny is not, in fact, captured but instead is en route to a photo shoot for Cosmo Girl. Bolt panics and at the first opportunity, escapes from the set to search for her.

Bolt takes an alley cat, Mittens (Susie Essman), whom he believes to be an agent of Doctor Calico hostage. Under duress, Mittens agrees to take Bolt directly to Calico by boarding a moving truck to Ohio. Cue cross-country buddy picture. As Mittens works to convince Bolt that he doesn’t have superpowers, they befriend a chubby, one-liner spewing hamster named Rhino (Mark Walton). I hold Rhino personally accountable for providing booger-eaters with catch phrases such as “That’s redonkulous!” The trio work their way back to Hollywood to reunite Bolt with Penny but when danger occurs in the real world, Bolt learns what it really means to be a hero and whether or not he has what it takes to become one.

When Disney acquired Pixar in 2006, John Lasseter (director of Toy Story) took over as Chief Creative Officer of Disney’s animation division. Serving as producer of Bolt, Lasseter rehashes Buzz Lightyear’s story of a quixotic protagonist exposed to the real world complete with a sardonic sidekick that experiences a renewed belief in the power of friendship. With that said, Bolt is still an enjoyable film if you can accept the flimsy premise and redonkulous one-liners. The animation is attractive and the 3-D, based on the little I saw before the digital projector blew out and the entire screening shifted to a standard print, was phenomenal. There were no jagged camera pans or headache-inducing distortions around the edges. The film genuinely looked as though the screen had a z-axis that disappeared into a vanishing point in the distance. The potential for new film expression using digital 3-D is staggering and it will be a brave new world once studios utilize 3-D in films other than children’s movies or James Cameron documentaries. Until then, 3-D, like the movie Bolt, remains an effective novelty.