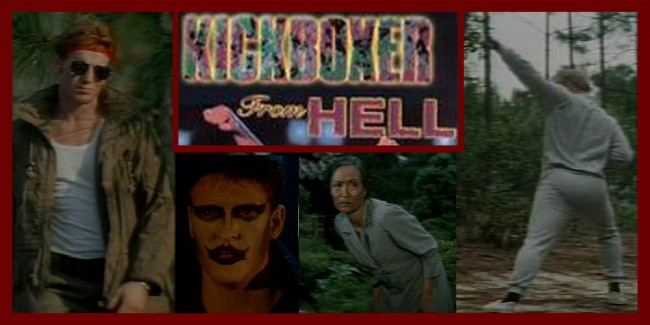 Oh my god, where to begin.  The film “Kickboxer From Hell,” (provided by the truly stunning people from Eden Entertainment Inc.) contained the least kickboxing, and yet the most hell, of any kickboxing film created before it.  Or after it.  Or ever again in the conceivable future.

Here’s the blurb from the back of the DVD case:

“While in Hong Kong preparing for a big tournament, American kickboxing champion Sean becomes involved with undercover British nun Sophia and her battle against Satan and his evil crew of kickboxers.  In the action-packed climactic battle, Sean destroys Satan and his evil henchman, the dreaded Scorpion.”

Satan?  Kickboxers?  The dreaded Scorpion?  HOW COULD THIS FILM GO WRONG?  (… is what I asked myself, repeatedly, for the following ninety minutes).

Let me tell you.

To start, the film is obviously two different movies spliced together… poorly!  The “Kickboxer From Hell” sequence (which, sadly, is the most entertaining sequence) is maybe fifteen or twenty minutes of footage spaced out by an entirely unrelated Chinese ghost story.

Oh, they TRY to link them up.  At the start of the film our heroine, Sophie (the undercover British nun being chased by Satan’s kickboxers) vaguely alludes to the fact that her partner has settled down to get married (HELLO worst nun ever).  The ghost story involves a newlywed named Eileen, so it must be her.  Also at one point Satan burns a picture of a young Chinese woman.  So there you go, the stories are intrinsically linked, BRILLIANT EDITING Eden Entertainment, NOBODY WILL NOTICE.

For me, the ghost story boils down to one factor: the totally inappropriate use of spooky soundtrack no matter WHAT is going on.  Please insert your own version of swelling horror music here:

The sheer terror!  The mind-blowing horror of the watermelon-eating ghost!

I think you get the picture.  There are only a few other notable features of the surprise bonus ghost story.  One: the old lady with the fakest osteoporosis back of all time who witnesses every strange occurrence.  She ominously pops up in the background of every scene, whether she is hiding behind a clock, or behind a bush in the woods in the middle of the night.  What the heck are you up to out there, old lady?  Then there’s the doctor who dismisses Eileen’s terrifying encounters as the result of “neurasthenia,” an ordinary condition brought on by the stress of marriage.  All newly married women feel stressed out and get crazy hallucinations! It’s Americanitis!

Phew.  On to the real prize of this film, the fifteen minutes of Satanic kickboxing.

I’ve already said all there is to say about Sophie.  She’s British, a nun, undercover, and running from kickboxers.  I’ll only add that she is easily captured every five minutes or so (yup, three times).

Then there’s American kickboxing champion Sean.  He is definitely my favorite.  Talk about the worst hero of all time!  First, he’s in crummy shape.  Like, tubby dude in sweatpants shape.  Second, he has zero interest in helping out the damsel in distress.  We get nothing but sarcastic remarks and rolled eyes from him until his brother gets kickboxed near the end of the movie.

And then he forces a mysterious Asian man to give him the map to Lucifer’s den, and the knowledge to kill him.  (Why hasn’t anybody done this before?).

Oh, and when Sean runs through the woods the theme music to “Halloween” plays in the background.  No joke.

Satan himself is a dude in excessive face paint and a cape.  His minions mostly consist of dudes wearing burlap sacks.  Oh, and his number one minion, Scorpion, is the most 80s guy of all time, complete with headband, golden earring, and aviator sunglasses.  And his fatality move?  Mega punch to the nuts.  Rock on, Scorpion.  You’re my second favorite.

The final battle must occur between Sean and Scorpion, of course.  The first half of the fight is with sledgehammers (KICKBOX, DAMMIT!), and then Sean tosses away his sledgehammer and insists he must win by kickboxing (THANK YOU).  Oh yeah and he also figured out that to kill Satan he must smash all of his green skull candle-holders THE END.

I would say “cue credits” but the movie just blanks out and goes back to the main menu at this point.

I’m pretty sad.  This movie could have been amazing.  It just needed a full hour of Sean’s exaggerated facial expressions and total disinterest in his own plot.   Less watermelon, more Satanic nut punches!

Until our wishes are fulfilled, here is some bonus Sean to keep you happy.