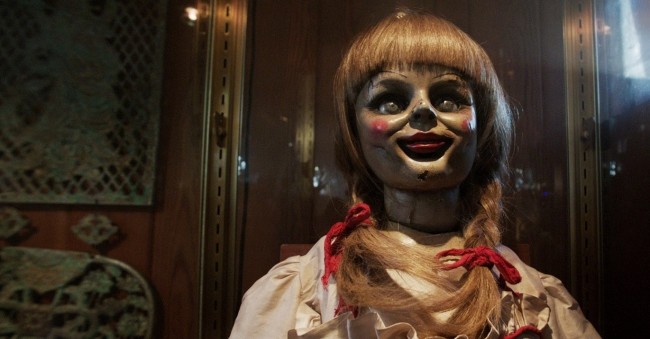 Dummies, dolls, and plastic fortune tellers make up the axis of evil in the land of possessed inanimate objects. Their lifeless orb-like eyes, stare, without motive, as their frozen lips curl into a macabre smile. A perfect conduit for demons, to be sure, these facades hang out until they have the appropriate opportunity to scamper across a hardwood floor. In Annabelle, you get a milquetoast family, this time in the sixties, that are accosted and humiliated by the most aesthetically miserable doll of all-time – this thing looks like it was designed in a dumpster by Rankin/Bass.

Our couple, played here by Annabelle Wallis and Ward Horton, are more wooden than the actual doll. Their roles call for their mouths to be agape, or their brows to be furrowed. As far as the characters go, it’s as if the screenwriter spent so much energy trying to pen era appropriate dialogue, that he forgot about making his protagonists interesting. There is a suitable amount of “gee whiz” and “well, honey, shucks” that the film employs in an attempt to make their movie seem authentically 1960s. Instead, everyone seems like a caricature of how people actually spoke in that particular decade. The dim-witted couple eventually become entrenched in the throes of a demonic doll’s tantrum, and the weathered F. Murray Abraham has to grow facial hair and quote bible verses. The elder statesman of actors, Abraham can barely believe his lines enough to accurately sell them to himself and the audience. He deserves a better film, and so do we.

Annabelle comes across as a Masters of Horror entry, where Joe Dante or Stuart Gordon fall asleep behind the camera. The scare, here, is waiting for a stationary object to animate or emote, so you get, in turn, gratuitous closeups of the doll. This is pretty much the audience’s reaction to the film at every turn:

The tactic is lazy and tedious and it enables the director to take the easy way out – anticipation over art. After the tenth time of the camera panning, ever so slowly, over Annabelle the doll, you begin to wonder if the director simply thought that the gnarled and sinister expression of the toy would be enough to carry a ninety-minute movie. John R. Leonetti, the director of the picture, is no stranger to possession films (he was the cinematographer behind Dead Silence, a story about a malevolent ventriloquist dummy). Here, he takes the standard route of repackaging horror tropes with a contemporary sheen. And Wallis, the star of film, simply cannot bail water fast enough to keep this drudgery afloat. Leonetti sculpts a derivative mold, where everything from Sinister to Rosemary’s Baby is sampled from – it’s like the Girl Talk of horror films.

If we’re talking doll or ventriloquist dummy scares, Annabelle falls somewhere below R.L. Stine and somewhere above Dead Silence. It’s basically a diluted attempt at capturing the atmosphere and fear that Richard Attenborough’s Magic or Rod Serling’s The Dummy had culled, so long ago. Leonetti’s opus is a toothless cash grab, that is more concerned about its doll design than its story.