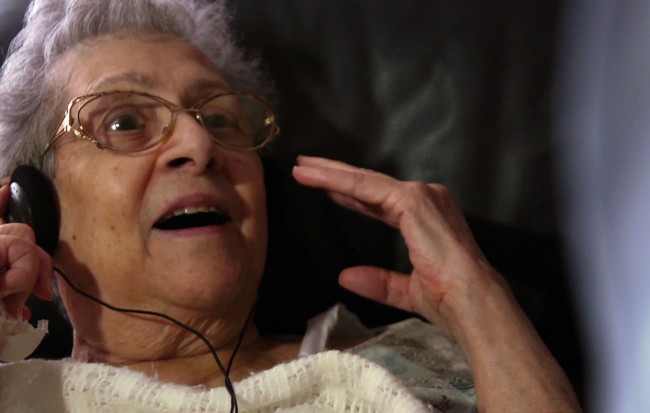 A mosaic of incorporeal, lost memories coupled with jolts of expression. Ethereal images flutter and dissolve. And the past becomes nothing but an old, scorched match head. But what if the intangible profundity of music can cull perforated memories out of someone’s mind? Or, at the very least, make the abyss more comforting. Dan Cohen, a social worker with an unyielding passion for music, decided to adorn those in nursing homes with headphones and iPods. The soft cackle erupts into the bending of strings and the crashing of symbols. Music, Cohen admits, was not a pragmatic approach in an era of medication.

Alive Inside tremors with hope and recoils with fear. Michael Rossato-Bennett films the suffocating artificial light of nursing homes with a sad urgency. Men and women, battling dementia, suddenly animate with feverish excitement. Can music therapy relinquish lost memories? Cohen thinks so, despite the lukewarm reception to his battle cry.

Cohen and Rossato-Bennett appear in the documentary, on or off screen, so often that it becomes problematic. The word “he” or “I” get thrown around, without reservation, to the point where the well-meaning duo seem to be fingerprinting the camera lens a little too much. And while gallant work is being done in the field of music therapy, I have reservations for this film’s approach when they refer to the mentally ill as “insane.” That phrase is archaic and a little too duplicitous to be used in an empathetic film about the human mind.

Alive Inside is pulsing with ideas, love, and disturbing loss. That said, if being curt, the academic research, at least on display, is skeletal. Instead of cross-examining the way music interacts with the brain, we are left with the filmmaker’s awe as a scientific compass. Respected neurologists, professors, and researchers within the field are given short shrift. And while a trailblazing social worker with a heart of gold is a marketable campaign, it would be nice to hear from more educated avenues when approaching this interesting subject. The marvel of emotion can intrigue; but it can only evoke feeling and not fact. Still, the juxtaposition of a nursing home’s sterile, powerless surroundings with the emotive burst of light from within its walls, when music is introduced, cannot be ignored.