A Freudian Slip Up 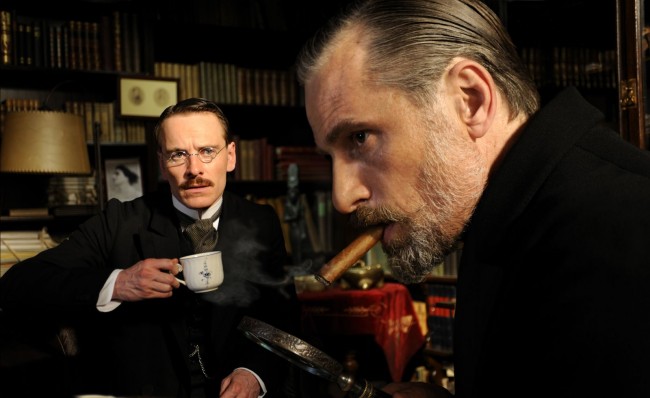 Director David Cronenberg is known for his spatterfests, where heads explode like Gallagher watermelons, guts spew from television sets, and severed fingers are nonchalantly plucked like flower petals in a child’s hand. In recent years the maestro of macabre has toned down the science fiction horror elements, replaced them with blood letting crime pictures, and, in the case of A Dangerous Method, made a straight forward romantic drama. A Dangerous Method’s aortas pump warm blood; the picture is enveloped by studious exchanges, rolling smoke from cigars, and grounded dramatic arcs. Cronenberg’s fingerprints are not exactly noticeable.

Cronenberg’s film revolves around the forefathers of psychoanalysis, Carl Jung (Fassbender) and Sigmund Freud (Mortensen). The two friends and colleagues spar over progressive thinking, lock horns over cups of tea, and clatter their heels on wood floors while investigating the uncharted waters of the human mind – so we are led to believe. In reality, however, the movie’s central nervous system is the interplay between an insatiable patient – played here by the wiry Keira Knightley – and the prudent, but ultimately truculent, Carl Jung. Knightley spends most of her time jutting her jaw out, caterwauling, as she writhes like a live wire in a pool of water. The actress does everything but claw at the walls in order to occupy the tortured frame of her character. At moments the eye lolling and finger tapping works, but other times, when she decides to inflate her lungs like a puffer fish, she appears to be trying too hard to hit notes that aren’t even there. Clearly these palpitations detract from the restrained, nuanced performances given by Fassbender and Mortensen.  To her credit, not many actresses would be able to embody such a volatile, vociferous character.

Though Jung and Freud had a tainted past together, the movie is augmented to the point where their relationship is only mildly examined. Even when the flames become fanned when the two intellectuals clash over beliefs, we’re left at the ringside waiting for something of note to transpire – and nothing much does. The fued between the two goliaths is on par with other complicated friendships: Sam Crawford and Ty Cobb, William M. Tweed and New York City, Dr. Dre and Eazy-E, Kevin Smith and Southwest Airlines. Instead of breaking ground on such a slippery, cantankerous, malignant relationship, we’re stuck listening to Keira Knightley impersonate Natasha from Rocky and Bullwinkle.

Still, it is interesting to see the repressed perversity of Jung, whose eventual immolation to his own practice was a proponent of his studies. The fact that Fassbender plays Jung with an ellipsis instead of a period is what makes his portrayal so profoundly interesting; he was a man with many theories but was ultimately an enigma himself. Mortensen’s embodiment of Freud is also one of the best performances of the year. The thespian lifts the brilliant Freud from his posthumous role as a doting quack, whose name many know, but few understand. Sadly, because of the languid screenplay and the distanced directing, A Dangerous Method begins to lose steam in the second half, leaving audience members to look for a shovel to hoist more coal into the slowing train’s stomach. If you attend Cronenberg’s newest opus, prepare yourself for a cocktail of squandered opportunity (Keira Knightley attempting  to channel Jessica Lange in “Frances”? C’mon).

Author’s footnote: It would be nice to see a movie where Bob Balaban plays German psychologist Hugo Munsterberg. How about Seymour Cassel as Erik Erikson? The late Karl Malden as Albert Bandura?