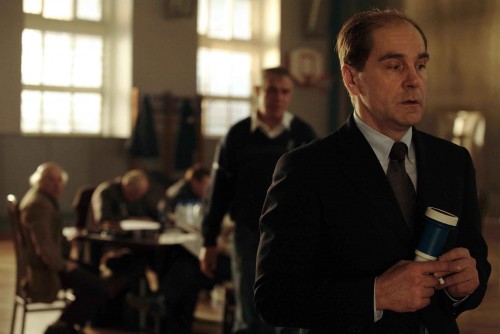 In the original 12 Angry Men, there was a sense of palpable fear. The jurors, knitted together with makeshift patchwork, were devoured by plumes of cigarette smoke, their fists were bolted to their chins in deep thought, and their tongues rapped against their mouths with the sound of machinegun fire. The original production, made in 1957 and starring Henry Fonda, was bathed in a murky gauze of paranoia and fear. Sidney Lumet, the director of the picture, had pushed his actors to the threshold of their abilities.

51 years later, Nikita Mikhalkov decided to rehash Lumet’s socially conscientious opus, this time setting it in his hometown of Russia. As the film gets underway, the jurors voices, much like the original film, hum with the oscillatory buzz of a hornet’s nest, creating a kind of smoky nostalgia. But as Mikhalkov’s adaptation progresses, you see that, even with better technical equipment at his overzealous fingertips, the director fails to capture the authenticity that made the original so instantly revered.

Sent to a school’s gymnasium to deliberate the fate of a suspected murderer, the twelve men, each confident of their decision to name the accused as guilty, sit down to vote. One by one, the men, boisterously condemning the alleged killer, scribble their decisions with alacrity. But, as luck would have it, one of the men, known as juror 1, finds that the accused could, indeed, be innocent. To the chagrin of the other eleven men, they are forced to sit, befuddled, for an entire day, toiling over the prospects of how to handle the outcome of the case.

The movie itself, running a little over two and a half hours, rarely probes the outdoor world. Instead the camera swings, panning back and forth, looking furtively at each of the jurors, watching their ideals cross swords within the confinement of a dimly lit gym. Once and again, Mikhalkov, in choosing to show us flashbacks of the accused murderers life, gives us circumstantial evidence that posits many theories for the viewers. Mostly, though, we are barred in a musty room, listening only to the cankerous expositions of these vary different individuals.

The original film, running a taut ninety-six minutes, slithers suggestively, uncoiling dangerously with each serpentine movement. The remake, for whatever reason, continues to loiter long after its point has been made, running an entire hour longer than its predecessor. The text of the subject matter, naturally containing dramatic ingenuity, gets weighed down by Mikhalkov’s need to further saturate the symbolism. The Russian director attempts to wax philosophically by adding poetic devices which, in the face of something already dramatic, don’t really require them. One of the images purporting to be subtle is that of a fluttering bird, one that, for the entire duration of the deliberation, wontedly flies by, sits down, or defecates during key words or interactions.

The jurors personalities are, to the world’s basic understanding of communicative exchanges, clearly unrealistic and melodramatic. Vehement tirades often transpire without being provoked, facial contortions smear across lips, and, whenever possible, drum rolls patter away to announce that something integral to the story is happening. It should be known that, while anyone can write angry dialogue, only good writers can illustrate tension – here, Mikhalkov fails.

The actors in the film, though attempting to show how difficult it is define morals and justice, end up wadding through the nuts and bolts of Mikhalkov’s toolkit, forever lost on how to build their intended message. The men in the film spew saliva from their mouths with the pressure of a punctured lawn hose, their shoes clack on the floor like frantic Morse code, and their arms slice through the air as if they were emotive windmills, but none of it seems sincere; in fact, most of it is over the top. In one scene, a juror, demonstrating his use of a knife, whips the weapon around until it flies from his hands, truncates a man’s cigarette from his lips, and then, promptly, plunges into a desk. In another, frightfully more ridiculous sequence, a separate man, finding a stray hypodermic needle, somehow thinks it smart to run around playfully until the tip of the syringe accidentally zips into a dartboard. I’m sure, if asking a large majority of people with jury duty experience about this type of zaniness, they would not say that they remembered a similar situation.

After a cavalcade of false endings, false notes, and false promises, the Russian remake of 12 Angry Men does little to reintroduce the story to a new audience; if anything, it will keep youthful moviegoers from renting the older, better version of Reginald Rose’s heralded play.

No matter how many negative statements I make, the film, screened for former Russian President Vladimir Putin, “brought a tear to the eye” of the stoic incumbent. Whether we should believe this or not is up for debate. Putin, after all, was said to have single-handedly fought off a bear just this last year. I would, considering the facts and from what I know of Putin’s unflappable nature, be more likely to swallow the story of him sparring against a bear than the alleged story of him popping off a few tears during the conclusion of Nikita Mikhalkov’s marred interpretation of civic duty.